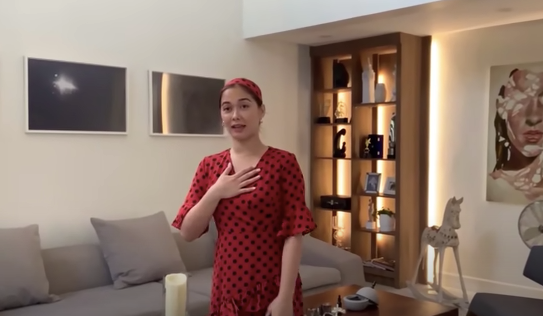 Have a peek into Maja Salvador’s ‘modern tropical’ house

Just recently, actress Maja Salvador showed off her Manila home for her house tour episode on her YouTube channel.

The modern tropical house which she calls “Casa Andres” had undergone several renovations.

(This is our family house. I don’t live here anymore, but since there’s a lockdown and ECQ again, I decided o stay here with my brother. It’s just my brother who lives here.)

Salvador began the house tour with the mini garden. Viewers were shown her plants, and immediately after, a griller.

(I am such a foodie. We love to eat as a family. One of my brother’s requests is to have a griller in the house. Since I was away for four months, that was my gift to him.)

Before going to the living room area, Salvador showed the foot bath just outside the door, in observance of health protocols. Once inside the house, there is a console table which bears a thermometer gun, alcohol, face masks and tissues. There are also white slippers to be used while inside the house.

Salvador then shared how she loves the living area because of its high ceiling. It is her favorite nook, she said, as it is airy and very relaxing.

Gomez explained that since Salvador loves family and the beach, these two ideas were merged as they came up with a modern tropical concept. Wood features and plants were incorporated while lighting and textures were highlighted. Salvador is not a “plantita” she said, but she still thought it best to have plants in the house.

“The suggestion of Miah is mas maganda ang bahay kung may puno kasi mas nakakabuhay ng bahay kapag may living things,” Salvador said. (The suggestion of Miah is that the house becomes beautiful if there are trees, because it brings life to a house when there are living things.) She then showed viewers a palm tree and and a euka plant inside her house.

She also showed her kitchen and the dining area which underwent some renovations when her mom went to Canada.

(Before, the design was not like this. It was just plain. Before, the colors were just red, white and black. Now, it is modern tropical.)

The actress said that her kitchen is “therapeutic” because she loves to cook.

Salvador next showed her lanai where she does her exercises. She turned it into a gym area.

(And or course, it is my dream to have a sauna in my house. It’s my boyfriend’s birthday but it was me he gifted with a sauna. It can accommodate three persons. After workout, you go to the sauna and you’d be relaxed.) JB