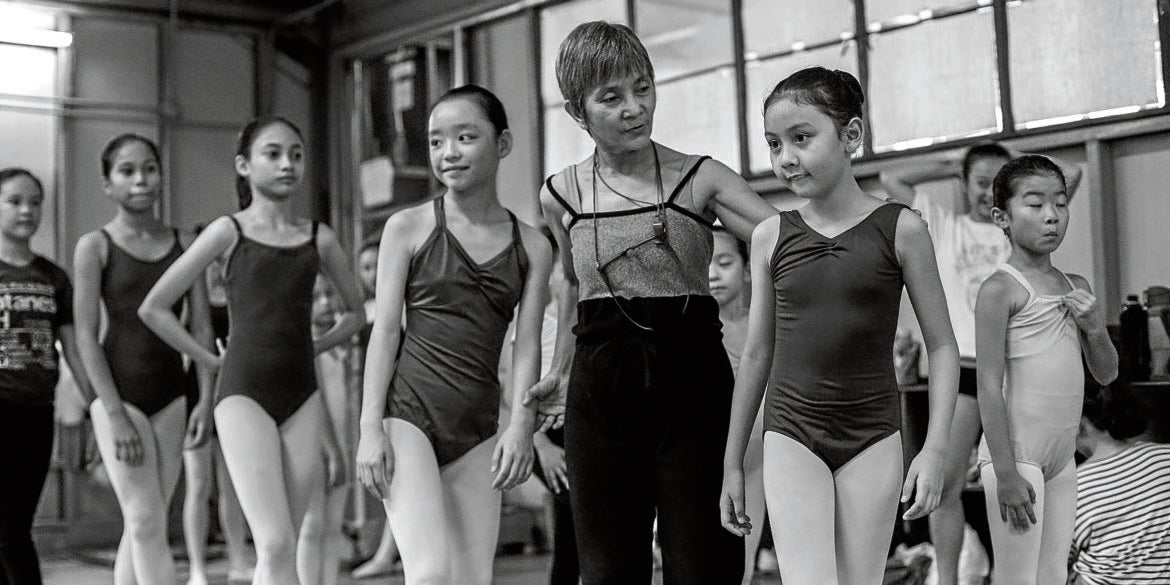 Like most teachers, Sevidal prefers live classes so that she could correct the students. —PHOTOS BY ERNEST SARINO MANDAP

In 1994, dancer-ballet mistress Persady “Perry” Sevidal took a leap of faith by leaving Ballet Philippines after 15 years to open her namesake school in Makati. Twenty-six years later, she is making a dramatic exit with another grand jeté (big jump).

Like many small businesses, the school is a casualty of the pandemic and government restrictions.

“I put up this studio with my own sweat. I never took out any loan.”

She opened her first studio on Sept. 17, 1994, in a rented warehouse in San Antonio Village, Makati. After a few years, PSB moved to the fifth floor of another building in the same area. When the landlord had other plans for the spaces, Sevidal searched for a vacant lot where she could build her studio.

The barangay chair recommended a property up for lease on Sampaloc Street. With her savings of P700,000 from teaching jobs at the Cultural Center of the Philippines (CCP) Dance School and other gigs, she signed the lease contract and built the studio which opened in 2002.

“I’ve maintained this studio for 18 years. Even when the enrollment declined, I managed to sustain it,” says Sevidal.

The three-story building is unique for its structural steel posts and beams. An ideal place for classes and practices, the studio is as big as CCP’s rehearsal hall.

The viewing area on the second floor overlooks the studio. Unlike other studios which are off-limits to parents and yayas, here guardians could watch the children any time.

The new studio held its first summer dance workshop in April 2002 with a healthy enrollment of 95 students. The working capital was used to build the restrooms, the viewing floor and her home on the third floor.

Through the years, Sevidal earned a reputation as a nurturing teacher who could improve the skills of the weakest students. Parents and students adored Sevidal for her generosity of spirit. She made everybody feel at ease with one’s body.

Beneath that soft and gentle exterior is a resilient spirit. Some of her earnings shouldered the medical expenses of her late parents, two brothers and an aunt. She also subsidized the college education of two orphaned nephews and became a guardian of the son of her late first cousin. Yet the overburdened Sevidal never complained and always remained cheery.

The past seven years, PSB enrollment started to decline due to the hip-hop craze and the competition from newer dance schools. The heavy traffic and the road construction in her area also made the school less accessible. Despite the rising costs of operations and diminishing income from the studio, Sevidal managed to keep afloat with private lessons and other teaching jobs.

Last December, Sevidal’s landlord mentioned that his family had plans to sell their property. Examining her savings, she forecast that she could afford to pay the monthly lease until October 2020.

Sevidal was hoping to earn from the annual summer workshop and recital of at the CCP Little Theater set for May. On March 12, Sevidal was forced to cancel the children’s classes as parents were apprehensive about the pandemic. Four days later, the country went on lockdown, thus hitting the real-time cash flow from her live classes. The CCP declared that it would be closed for the rest of the year.

A week after the lockdown, Sevidal started livestreaming her classes for free on Facebook.

In April, her student Raisa Medina offered to host Sevidal on Zoom. Medina and another ballet classmate, Solenn Consing, became PSB administrators for the classes. For P350 a class, the student gets her money’s worth from Sevidal’s attention to detail.

“I prefer Zoom so I can correct the students. I can’t see them in FB Live,” she says.

The working capital from two dozen students and two private clients has been sufficient in running her household. However, with the uncertain future and continuing new coronavirus disease restrictions, Sevidal realized that she could not continue her school.

Even if studios were allowed to open, parents would be apprehensive about sending their children to ballet classes.

Still, she manages to keep the students enthusiastic. This September, PSB will hold a series of online anniversary showcases, with the finale on Sept. 17. The dances were taught through Zoom. Each student sent a video of herself which was edited for the virtual shows.

The studio will be demolished when its final curtain falls. Sevidal will sell the wood and the steel posts. She hopes that the income from the sale would pay for the demolition. Sevidal will start a new life in her hometown in San Fabian, Pangasinan, with her ward, Niño Albay, three household help and her nine dogs.

Although she has been teaching since she was 14, Sevidal, now 62, won’t retire. She plans to hold online classes in San Fabian and perhaps rent a small dance studio in Dagupan when restrictions ease up.

“The hardships were blessings,” Sevidal says with a smile. “Nadapa ka, tatayo ka ulit (When you fall, you rise up). If a door closes, the windows open. The opportunities are narrower when you’re 60. That’s why I say it’s a window, not a door. Tuloy ang buhay at pakikipaglaban (Life goes on along with the struggle).” —CONTRIBUTED INQ