She cringed at living up to 100, found her peace at 90 | Inquirer Lifestyle ❮ ❯ 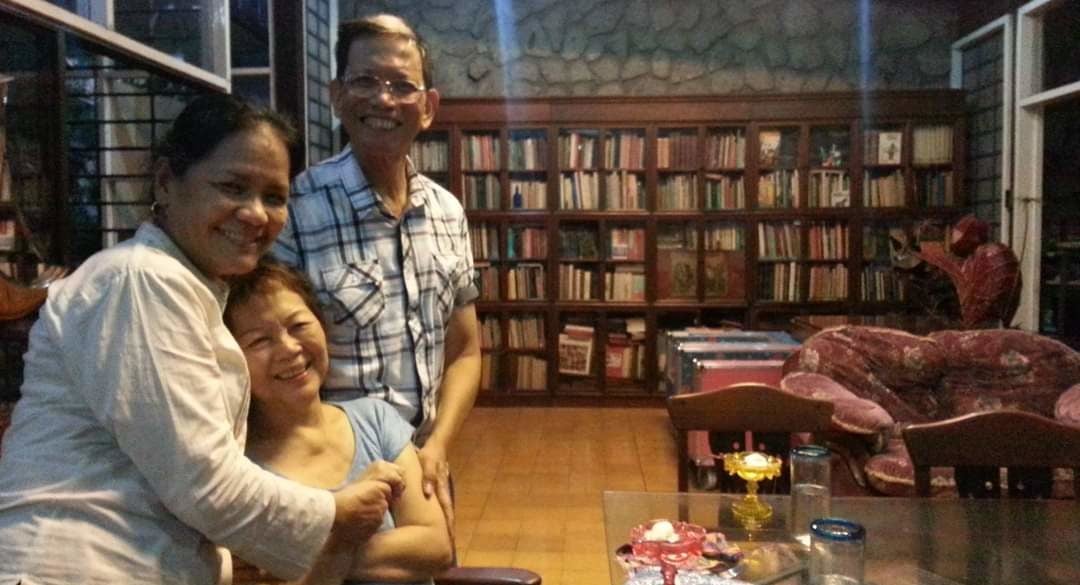 Fernando with Alma and Mario Miclat in her art-filled, book-filled home

With Gilda leading the ‘pangalay,’ we swayed with abandon in her enchanted garden and wrote messages to our departed on paper lanterns that floated up to the sky

Gilda Cordero Fernando was to do a send-off ritual in her home in Quezon City for Maningning and other departed loved ones. How could I refuse?

My daughter Maningning had just passed away and friends tried to lift my spirits up, as well as my husband Mario’s and younger daughter Banaue’s, by writing poems to honor her, giving us books to read and inviting us to dinner. But we preferred to just stay home and keep to ourselves. However, we could not refuse Gilda.

We came—parents who lost a child, wives who lost a husband, siblings who lost their parents—and with Gilda leading the pangalay dance, we swayed with abandon in her enchanted garden. We wrote messages to our departed ones which we put in paper lanterns that floated up to the sky.

That was 20 years ago—a memory of a most beautiful gesture of love and compassion at a time of grief—that will remain in my heart forever.

Gilda loved Maningning’s sister, Banaue, and followed her in many plays and concerts at the Cultural Center of the Philippines (CCP) and the University of the Philippines Diliman. On wheelchair, she graced Banaue’s concert with Far Eastern University’s Pangkat Kawayan May last year.

Gilda was the quintessential Renaissance woman—a most distinguished writer, publisher of exquisite Filipiniana books, unique theater producer, out-of-the-box fashion designer, and by the time she reached 70, a visual artist of note who launched successful exhibits.

She had several prizes from the Palanca Awards, most notable of which was her story, “A Wilderness of Sweets,” which won first prize in 1964. It was a bittersweet narrative on survival during the war when Manila was declared an Open City yet was bombed just the same, making it the most devastated city after Warsaw during WWII.

Fifty years after winning the prize, Gilda was conferred Dangal ng Lahi by Palanca in 2014, one of the many lifetime achievement awards she received, including Patnubay ng Sining at Kalinangan from the City government of Manila in 1993, Gawad CCP for literature and publishing and Gawad Pambansang Alagad ni Balagtas in 1994, CCP Centennial Honors for the Arts in 1999, Dangal ng Haraya from the National Commission for Culture and the Arts (NCCA) in 2007, Gawad Tanglaw ng Lahi from Ateneo in 2008, and the Lifetime Achievement Award from the National Book Development Board and Manila Critics Circle in 2012.

She was a cultural icon beloved by all, young and old alike, by parents and their children. Karina Bolasco was spot on in her Facebook post: “Gilda’s love for being and becoming Filipino was such an influence on an entire generation of writers, artists and cultural workers so that now, if you ask around, the leading lights of arts and culture were all groupies of this rock star.”

One such group is the GCF FC (Gilda Cordero Fernando Fan Club), which was formed when some kindred spirits—Babeth Lolarga, Belai Gruenberg, Nash Tysmans and myself—went to see Gilda for a casual visit and lunch which serendipitously turned into an art session, coaxing even uninitiated me to play with the paints. The exhilarating afternoon gifted me with a signed Gilda Cordero Fernando artwork, while she chose mine, which I titled “Homage to Babeth’s Calder.”

We all so love, admire and adore Gilda that the GCF Fan Club was just so spontaneous.

As early as February, the Club planned a tertulia for Gilda to be held on her 90th birthday in June. There was to be a Marinduque-style putungan ritual where Gilda would be crowned with flowers to the tune of National Artist Levi Celerio’s “Sampaguita” as we shower her with petals. Gilda would have loved it, lover of rituals as she was.

But new coronavirus disease (COVID-19) happened. We would not see Gilda again, and only got updates from Wendy. Three weeks after Gilda’s birthday, Wendy messaged to say: “Just visited Mad yesterday. Haven’t visited since lockdown. She has greatly deteriorated. She hardly talks. They feed her food from the blender. Tinatamad ngumuya. Haay.”

When Gilda’s son, Mol, announced that Gilda passed away Aug. 27, he wrote: “Inimitably, Lola Mad held her own wake earlier, thus, there will be no need for funeral services.”

Indeed, as early as 2012, she already held her “wake,” quoting Seneca: “Rehearse death. To say this is to tell a person to rehearse his freedom. A person who has learned how to die has unlearned how to be a slave.”

Reporting on her wake in her June 3, 2012 Inquirer Lifestyle piece, “Dance me to the end of love,” Gilda wrote: “Thankfully, Lyvia Martinez rounded off the evening with two Balinese woven palm offerings and a quieting meditation. Each one had to light an incense stick to put in the centerpiece. It gave the night a spiritual flavor, after all. The closing ritual was the burning of all the Chinese favors, good luck cards and paper money in two flowerpots in the indoor garden.”

She added, “A happy time, I think, was had by all. That night, I had a very literal dream. Many airplanes were leaving the airport. I begged to stay a few minutes more as I was waiting for a friend (end of dream).”

The wait counted eight more years. From 2011 to 2017, Gilda, in her Sunday Lifestyle column, Forever 81, wrote an amazing array of topics, all highlighting her love and passion for Filipino culture. Her writing was always something to look forward to—funny, witty, irreverent, yet uplifting. Filipino. Truly Gilda!

On her friend, Manny Chavez, introducing her to the opera, she wrote in “Tutto Opera,” Oct. 12, 2014: “I recently read that in times of crisis one should be able to conjure a place of peace and contentment. To me refuge will always be just my home, the compound composed of a son and his family next door, my cat at the foot of my bed listening to ‘Turandot.’

“And in the end, tutto na sana ako ng opera.”

In “Living to a Hundred,” she wrote on Feb. 26, 2011: “If anything annoys me in birthdays for the elderly, it is when some guest toasts the celebrant with ‘May you live up to 100 years old!’ Maybe I take it too seriously. It makes me cringe. It reminds me of that Chinese wish, ’May you live in interesting times!’”

Not during these times! Her “Being Filipino” on Sept. 15, 2013 states: “During the novena I heard again those passages in the Prayers for the Dead that always made me teary eyed: ‘Bring her into your paradise, where there is no more grief, or mourning or sadness, but peace and joy with your beloved Son and the Holy Spirit, forever and ever.’”

Gilda, who cringed at living up to 100, has found her peace at 90. —CONTRIBUTED