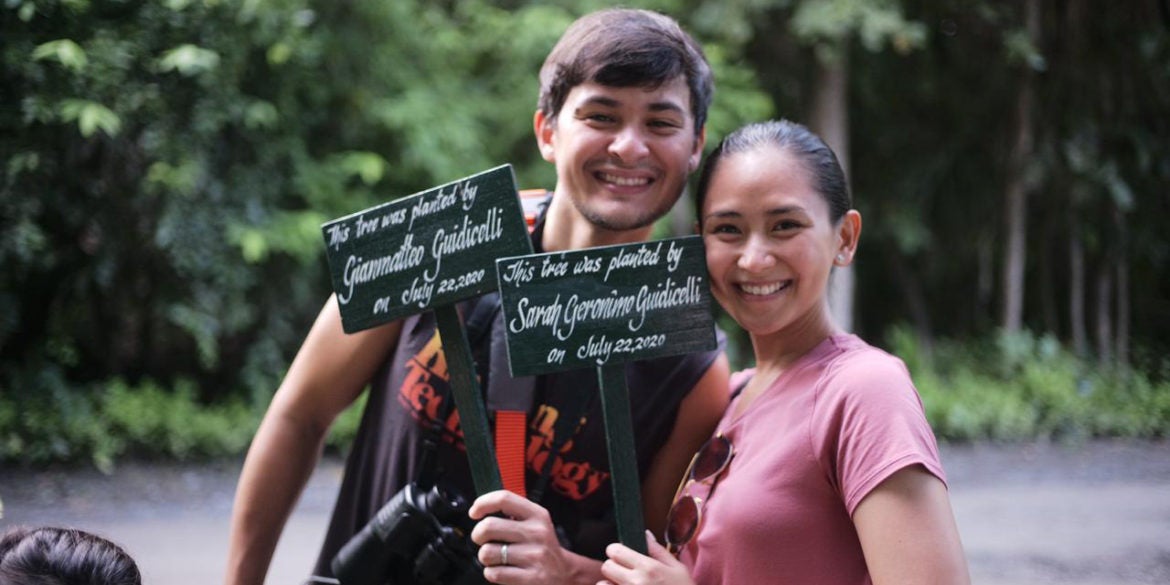 Newlyweds Matteo and Sarah with their Tiffany & Co. wedding bands

This was what happened when he took his grandfather’s advice

We could hear a dog yelping and barking incessantly in the background as Matteo began to speak on the phone. It could be Dakota, their dachshund. His wife of six months, Sarah, was somewhere in the house preparing for her show.

You can’t get any more homey than this ambiance, palpable even in these times of no in-person meetings.

Celebrity actor Matteo Guidicelli and entertainment icon Sarah Geronimo have been married for seven months now, much of the period spent in lockdown. It was the peace and quiet they deserved after a long winding courtship and engagement that became dramatic headlines.

“I can’t complain, tita,” he began our chat. “We’ve been busy. There are many shoots.”

At least the quarantine didn’t paralyze their careers. And like we wrote at the start of the lockdown, they have settled into the cocoon of domestic routine, taking turns cooking and doing house chores.

Finally, we were able to ask him last Thursday about the role of Tiffany in their romance—something we meant to talk about months ago but we were reeled into the pandemic.

It wasn’t well known that the couple chose Tiffany for their platinum wedding bands—the Guidicellis have been loyal patrons of the iconic jewelry brand for three generations now, starting with Matteo’s Italian grandfather, Gianni (after whom the family’s Italian restaurants, Da Gianni, are now named).

“I knew I really had to make Tiffany part of my life and Sarah’s,” Matteo recalled, “because my grandfather had always reminded me to buy Tiffany for Sarah. My grandfather loved the brand even in his native Italy.”

Matteo’s closeness to his grandparents is well known—how his folks decided to migrate to the Philippines, particularly Cebu where Matteo’s mother, Glenna Fernan, is from, to start an export business here and to be close to the children of Glenna and husband Gianluca as they were growing up.

The old Guidicelli didn’t live long enough to witness the marriage of Matteo and Sarah. Matteo, however, followed his grandfather’s advice down to the letter.

To propose to Sarah, Matteo gave her his grandmother’s emerald ring surrounded by diamonds, then a diamond ring he bought himself.

For the wedding, Matteo chose Tiffany: the Classic wedding band in platinum, 4.5 milimeters wide for him, and Tiffany Embrace diamond wedding band, 3 mm wide for Sarah.

In truth, that wasn’t the first time Matteo said it, as it were, through Tiffany.

Years ago, long before they went steady, Matteo was a diehard Sarah fan who would watch her concerts in Manila and the provinces. He followed her career and admired her from a distance—the nosebleed section of concert venues, to be exact. (Of course in later years, he was already in one of the front rows—progress!)

It was as a fan that Matteo thought of buying her a Tiffany necklace with an “S” pendant. He just kept it because they weren’t even close yet, not even when talent manager Jojie Dingcong asked Matteo to join Sarah’s concert tour in the US.

Matteo had to leave for college in the United States, so he kept the necklace in a briefcase and left it with his friend, telling him to keep it until he could give it to her.

Nothing was happening in the “meeting” department, so much so that Matteo wondered if fate would bring him to another girl with initial “S.”

It brought him to the original “S,” no matter the circuitous route. Finally, on their first Christmas together, when they were already going steady, Matteo retrieved the briefcase and gave the Tiffany “S” pendant to his Sarah.

How did Sarah react to the various Tiffanys in their lives? She turned emotional and was so touched, Matteo recalled. Did she cry? Matteo replied, “Ako umiyak, tita.”Even “tita” Audrey Hepburn would have approved of their story in a heartbeat.