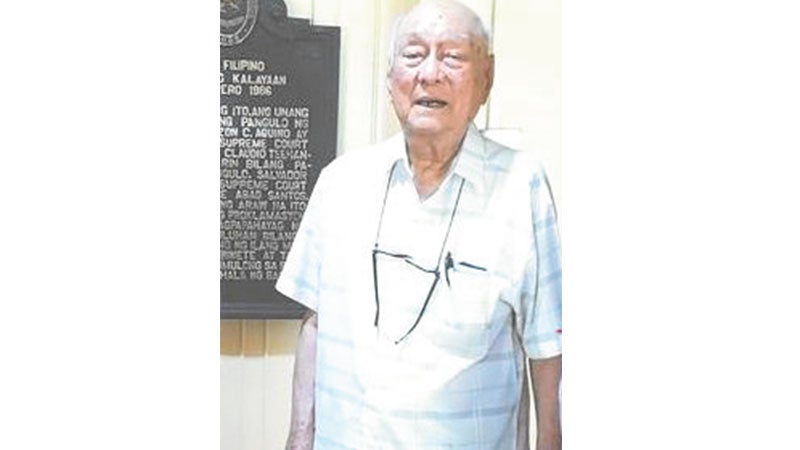 Dr. Benito Legarda Jr.: A giant has passed away

Until the very eve of the lockdown, he had attended almost every single important cultural activity that happened in Manila. And once back in his home office he wrote the chronicle of the event and posted it on his Facebook. He had been for decades not only the most brilliant scholar but a shining star of Manila cultural life.

I have never heard “Beniting” (as his closest friends called him) talking about the pains of aging or about the nostalgia of the past as elders use to do. He loved life silently as very few did. He was always curious about what was going on in culture, in politics, in academic life, in society.

When he was already 90 he toured the world. He went to visit his daughter and grandchildren in the United States, then he moved to Madrid, where we had lunch together, and then he continued on to Bayreuth and Salzburg to attend their famous music festivals.

He and his late wife Lita were music lovers and great connoisseurs of the classic repertoire. There was no classical concert in Manila, especially the Manila Symphony Orchestra’s, without his presence.

Ben, as friends from his younger years called him, knew about almost everything. They used to say, “Better than surfing or Google, ask Ben.” Like José Rizal, Ben was a real Renaissance man, the latest of his kind.

Benito represented the excellence of being Filipino, the blend of the best of the ingredients of Filipino identity. He was very Filipino, but with Spanish and Chinese ancestry, who acquired education in American universities, at Harvard and Stanford, no less.

He belonged to the last generation of Filipinos that had Spanish not as an acquired language but as a mother tongue. He had a beautiful Filipino Spanish with a very rich vocabulary, a way of speaking Spanish that has practically died with him. (We must treasure more and more the very few remaining ones who speak and write such beautiful Spanish, as Guillermo Gómez).

Don Benito was always one of us at the Instituto Cervantes and Spanish Embassy. He attended every single lecture, sitting in the first row. When the lecturer said something funny, Benito would burst out in loud laughter. I experienced that myself the first time I met him in 1994, at the Mayflower building in Malate, when I was invited by Instituto Cervantes de Manila to give a lecture on Philippine-Hispanic architecture. I had just started to research on that topic. When right before my talk started I was introduced to Benito by the then director of Instituto, I panicked: I had read his fantastic essay on Ilocos churches.

When talking to the audience I excused myself to dare talking on that topic at the presence of people that knew by far much more than me like Dr. Legarda. Then his laugh burst like thunder. I cannot say if that made me more confident or more scared. I have had the privilege to enjoy his friendship from then on.

During my first stay in Manila as Instituto Cervantes director (2001-2006) I would meet him almost every single Sunday afternoon at Rafa Ortigas’ house in Wack-Wack. Rafa’s generosity gathered a small group of friends that got together to have merienda talking of Philippine history and culture. I learned a lot from them, especially from Beniting, “un sabio” (a wise man).

His memory was prodigious until his very last day. In spite of aging he could remember any name, any book, any simple detail about things recently or remotely that had happened. It was unbelievable!

In spite of his talent and intellectual assets he was anything but arrogant or presumptuous. He was friendly, accessible and simple. I cannot forget an anecdote in one of the visits of Queen Sofia to her beloved Philippine Islands. She inaugurated an exhibit of paintings in the National Museum. “All of Manila” was there. Everybody tried to get close to the Queen to be photographed with her or in her surroundings. One high-ranking dignitary gave me an elbow to clear his approach to the Queen.

Benito was behind the Queen’s escorts and body guards; he was attentive to the explanations about the paintings given by the curator. In a particular moment, surprisingly, an open space was made around the Queen, who was now facing Benito standing in front of her.

She was the one to approach and greet him: “I see you around all the time following very attentive the explanations. It’s a pleasure to meet you, sir.” Everybody was crazy to get near the Queen and greet her, but for Don Benito, it was the very Queen who went out of her way to greet him.

Actually given his physical and intellectual stature it was impossible for him to go unnoticed. With Benito Legarda, the economist, the writer, the intellectual giant, the friend, an era comes to an end. He has passed away 100 years after the death of another islander and great Benito, the Spanish writer Benito Pérez Galdós (1843-1920), born in the Canary Islands.

Dear Benito, Ben, Beniting: we are going to miss you so much. —CONTRIBUTED INQ

The author is the director of the Instituto Cervantes de Manila.