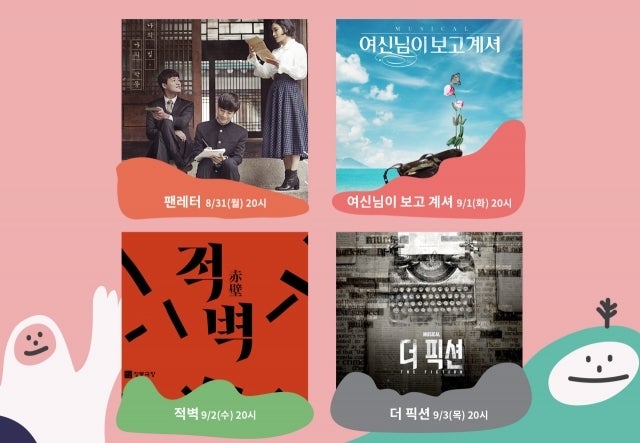 (From top left, clockwise) Poster images of musicals “Fan Letter,” “The Goddess is Watching,” “The Fiction” and “Red Cliff.” KTO via The Korea Herald/Asia News Network

On Monday, the musical “Fan Letter” was streamed via Naver TV and V Live. Musicals “The Goddess is Watching,” “Red Cliff” and “The Fiction” will follow. The four musicals come with English subtitles.

Since 2017, the KTO has supported 14 musicals in offering foreign-language subtitles with the goal of expanding the global audience base for Korean musicals. In 2019, a total of 6,077 foreign tourists in Korea watched musicals with foreign subtitles supported by the KTO, marking a 285.6 percent increase from that of 2017.

“It is the first time that the KTO is hosting an online festival to promote popular Korean musicals,” said Park Hyeong-kwan of the KTO.

“Amid the depressed tourism market caused by the COVID-19 pandemic, we are working to make this festival an opportunity to expand the performing arts tourism market,” Park said.

The festival runs until Thursday. For more information, check the official website at kmusicalonair.com.