Are you ready for ‘the Muslim ‘Game of Thrones’?’ | Inquirer Lifestyle ❮ ❯ 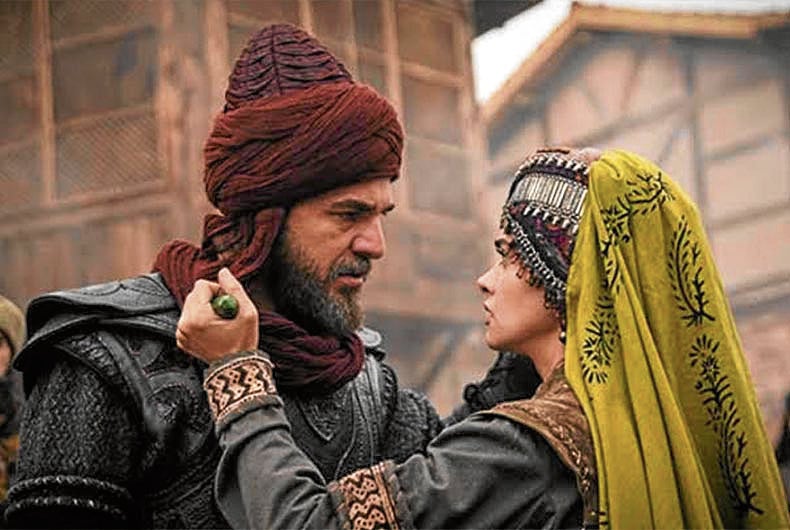 A chaste kiss on the forehead is as far as Engin Altan Düzyatan and Esra Bilgiç go in “Diriliş: Ertuğrul.”

Are you ready for ‘the Muslim ‘Game of Thrones’?’

If K-drama isn’t your cup of ‘cha,’ check out this compelling Turkish historical epic, where Christians are the bad guys

Tired of bulgogi? How about some doner kebab?

Koreanovelas have dominated Filipinos’ quarantine binge-watching during this pandemic season, but they’re not everyone’s cup of cha.

(Despite being culturally omnivorous, I, for one, balk at any program where the boys are prettier than the girls.)

Fortunately, with the advent of streaming services and YouTube, there are endless alternatives—and not just the ones you might have heard of.

I made the mistake of checking out the pilot episode of the Turkish TV series “Diriliş: Ertuğrul,” strictly out of curiosity after reading an article in a UK newspaper that dubbed it “the Muslim ‘Game of Thrones.’”

One week and 126 episodes later, I am hooked, and I’m only midway through season 2 of a five-season series that runs more than 400 45-minute episodes.

Once you get past the subtitles, the cultural dissonances and some wonky CGI in spots, it makes for some surprisingly compelling viewing, specially during this pandemic season, as a welcome if temporary escape from the bleak and frightening world outside.

Unlike George R.R. Martin’s brilliantly conceived out-of-time fantasy world in GoT, “Diriliş: Ertuğrul,” which translates as “Resurrection: Ertugrul” is a historical epic based on real figures and events.

Set in tumultuous 13th-century Anatolia, the series tells the story of the hero Ertuğrul as he struggles to unite the nomadic Turkish tribes against invading crusaders, Mongol hordes and the Byzantine empire under the flag of Islam, guided by the wisdom of the Sufi sage Ibn Arabi of Andalusia.

The real Ertuğrul was the father of Osman I, who founded the Ottoman Empire that conquered much of Central Asia and Eastern Europe, and lasted until the creation of modern Turkey.

The show has become a sensation not only in its native Turkey, but in other Muslim countries, specially the Middle East and Pakistan, and is slowly making inroads into the rest of the world.

“Since its release in 2014, the Turkish TV series has captured audiences in Latin America, South Asia and Africa,” writes Aina Khan in the aforementioned article that first caught my eye.

“Nelson Mandela’s grandson and Venezuela’s president, Nicolás Maduro, are among its burgeoning army of fans. The English subtitled version released on Netflix in 2017 has beguiled English-speaking audiences across the United Kingdom and the United States. The series is now so popular that it has been dubbed into six languages and broadcast in 72 countries. On YouTube alone, Ertuğrul has surpassed 1.5 billion views.”

Engin Altan Düzyatan, the steely eyed Turkish actor who plays Ertuğrul, has become a bona fide global star in much of the Muslim world, along with the beautiful Esra Bilgiç, who plays Halime Sultan, his “gazelle-eyed” love interest.

The appeal for Muslim viewers is obvious: For once they’re not the stereotypical fanatical terrorists or suicide bombers of Hollywood productions, but complex characters with deeply held beliefs, human emotions, character flaws and a rich culture.

Herein also lies some of the dissonances that non-Muslim viewers might experience while watching “Ertugrul.”

In a stunning reversal, at least in season 1, Christians are the bad guys, represented by the sinister secret society known as the Knights Templar and a scheming cardinal who tries to spark a second crusade in a ruthless power bid to become the new pope. (There are a few token “good” Christian characters in minor roles, just as Hollywood often writes in some “good Muslims” in their scripts out of political correctness.)

Since it’s aimed primarily at relatively conservative Muslim audiences, there’s no sex. At all. The most Halime Sultan gets from Ertuğrul is a chaste kiss on the forehead, and the female characters remain fully covered at all times, down to what look like white tube socks.

Once you get past that, there’s plenty of violence to keep the adrenaline up: Blood flows freely in brutal sword-fights and hand-to-hand combat between Ertuğrul and his righteous band of brother-warriors and the crusaders, Mongols and other assorted infidels who oppose them. Once in a while there’s a gruesome decapitation by scimitar or battle-ax.

The show has not been without controversy, highlighting some of the cultural fractures within the Muslim world.

“Ertuğrul” is produced by Turkish state television, hence the suspicion by some that it is a propaganda vehicle for Turkish President Recep Tayyip Erdoğan’s brand of Islamic populism, a means of projecting “soft power” as Turkey tries to expand its sphere of influence in the region. (It has also become an important and lucrative Turkish export.)

An ultraconservative Pakistani cleric has issued a fatwa (religious edict) against watching “Ertuğrul,” branding it haram (forbidden) for Muslims. This was mostly ignored by Pakistani viewers who remain some of the show’s most avid fans, and no less than Prime Minister Imran Khan has highly recommended the show to his countrymen.

“Ertuğrul” actress Esra Bilgic, however, was endlessly trolled by less-tolerant viewers from that country when she posted photos of herself sunbathing in a bikini, such that she was forced to turn off the comments section on her Instagram account.

It’s a reflection of the continuing tension between liberal-secular views and more fundamentalist prejudices in the Muslim world that doesn’t really prevent non-Muslim viewers from enjoying the series purely as a cracking action-adventure yarn with heroic characters, devious plot twists, cliff-hanger endings and bloody battle scenes. (There might be some discomfort when the heroes raise their swords with shouts of “Allahu akbar!” after yet another victory, or glorify the idea of “martyrdom”.)

“Diriliş: Ertuğrul” has yet to catch on in the Philippines. It’s probably only a matter of time with the pandemic keeping most of us glued to our TV screens.

According to one of his social media posts, Engin Altan Düzyatan was actually a recent visitor to these shores, an event which went largely under the media radar.

If he ever makes a return trip, that may no longer be the case if “Diriliş: Ertuğrul” grabs the Filipino audience the way Koreanovelas have.