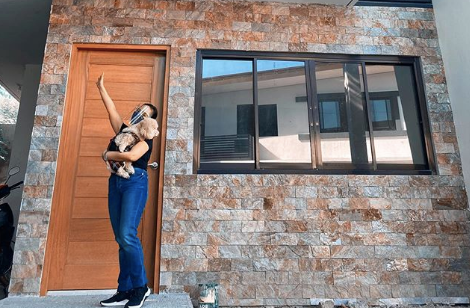 Comedienne-singer Kakai Bautista went to Laguna recently to visit her newly-built house which is nearing completion.

“Ngayon lang [kami] nagkaroon ng sariling bahay,” she stated as she showed fans the house’s facade and expressed gratefulness, as seen on her Instagram post on Sept. 5. (Only now did we have our own house.)

Bautista also featured her new house in her latest vlog episode titled “Tatlong Bahay sa Buhay ni Kakai!!”, uploaded on Sept. 4. Here, she showed her visit to her mom’s house and to her grandparents’ home, also in Laguna.

As to her own house, she revealed that it is not yet fully done because the interiors are still being fixed. These would have been finished if not for the lockdown and they would have been able to move in. But she said she trusts that God may have other reasons.

Bautista also revealed that her new house is the product of a previous burger chain endorsement with another actress Eugene Domingo. She said some funding also came from a bank loan.

She then recalled the days when she and her family were evicted from former dwellings because they were a remiss in paying rents.

(I want you to know that there were a lot of times when we were evicted from places we rented and it came to the point where I thought we would live in the streets.)

(To those reading this, there’s no deadline for dreams. No matter what age you are, no matter what situation you’re in, what you persevere for can be earned. Trust in your self and trust in the Lord, that’s all the formula you need.) JB