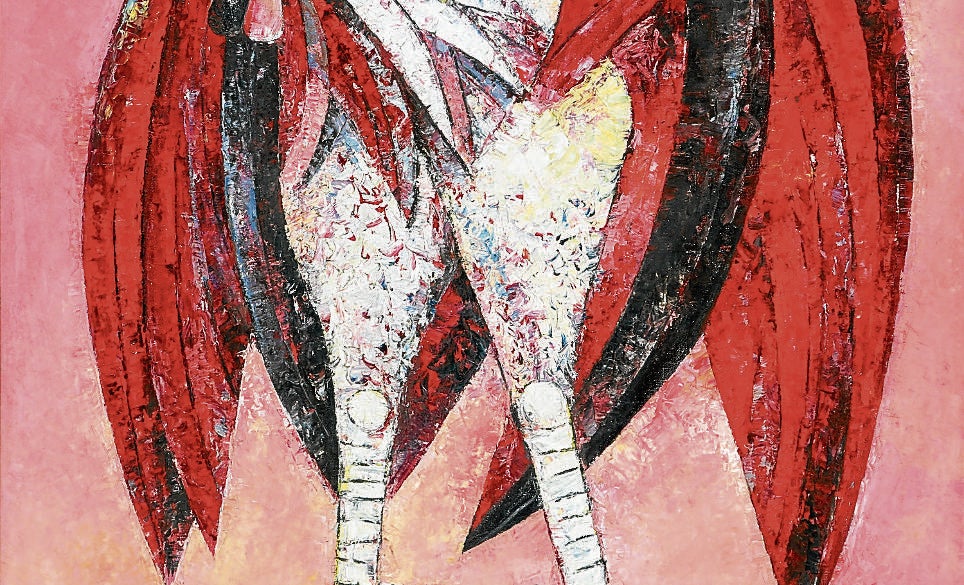 Depictions of Philippine rural life by midcentury modern masters such as Ang Kiukok and Anita Magsaysay-Ho are highlights of the Magnificent September Auction of León Gallery on Sept. 19 at 2 p.m..

Magsaysay-Ho’s charming portrayal of a street hawker in “Plant Vendor” features an everyman in a day’s hard work.

“Each auction always fills me with excitement,” said León head Jaime Ponce de León. “This particular edition… is made even more special as it comes in these pandemic times.”

“Ranging from prized masterpieces to museum-quality antique furniture, gold pieces and maps, the upcoming live auction is made more special as the celebrated centuries of Philippine art are well represented.”

Among the modern works are intriguing surreal, ethereal works out of masterful abstraction techniques. Fernando Zobel’s “La Fuente (Seville)” presents his focus on the essence of form and structures as he captures his memories of Cuenca, Spain, through his signature “paring down” process.

“Diaphanous B-XXXVII” (1980) is a fine masterpiece of Romulo Olazo, best known for his explorations on light and transparency techniques resulting in translucent, geometric layered forms that compose his “Diaphanous” series.

There is a transcendence of form in the exceptional José Joya masterpiece “Peace Routes,” featuring the National Artist’s play of colors and strokes, mastery of the medium and elimination of excessive brushwork in expressing emotion.

Annie Cabigting is another exciting contemporary artist who gives refreshing perspectives on how people consume art. Her “Composition in Black and White (Painting 1)” reveals her refined hyperrealism techniques and serves as a more introspective look on the relationship between an artwork and the viewer.

One of the country’s most significant contemporary artists, Jose John Santos III reveals a mysterious and highly personal—albeit autobiographical—work, aptly titled “Through the Peep Hole.” It is a symbol-laden glimpse into the relationship between a man and a woman, offering insights into the human condition as social beings.

His fellow artist (and wife) Pam Yan Santos addresses the effects of rapid urbanization as she renders multiplying mushrooms that represent the rise of buildings and infrastructures in her thought-provoking piece, “Mushroom Building.”

Among the trove of coveted lots are important maps. The “holy grail of Philippine maps,” the Murillo Velarde, appears in a reduced but still extremely valuable incarnation as part of the rare book authored by this Jesuit scholar. Also featured is a 19th-century Calvario en Urna, with a Corpus of Christ made of solid ivory. It has the Tres Marias included in the scene. The 19th-century kamagong sillon (lounging chair) was once the property of Félix Resurrección Hidalgo.