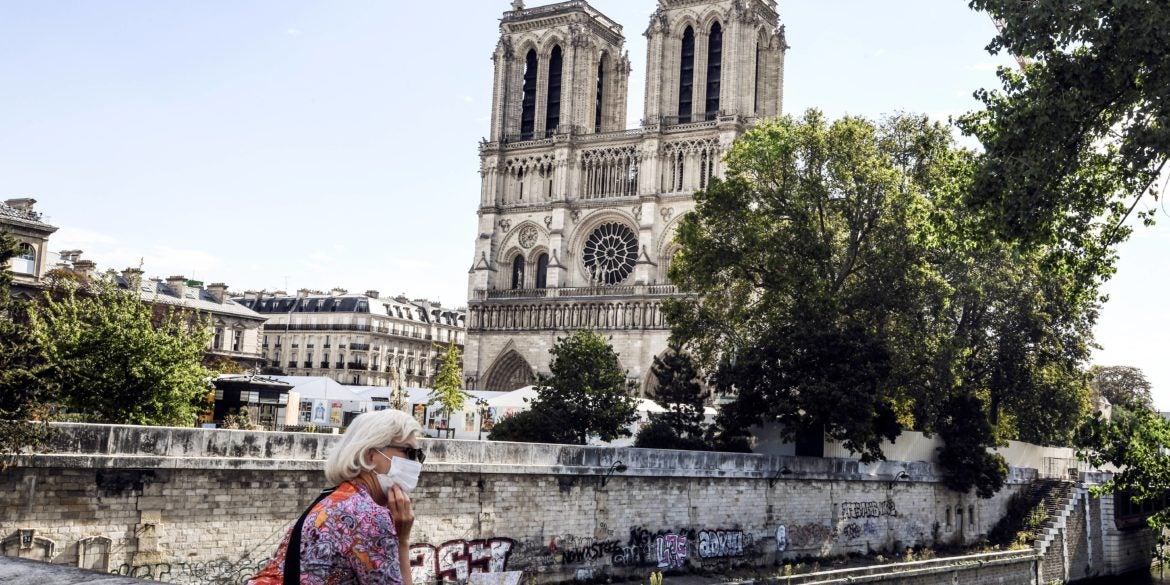 A tourist stands on the Petit pont-Cardinal Lustiger in front of Notre-Dame cathedral, on September 4, 2020, in Paris. (Photo by ALAIN JOCARD / AFP)

The archeological crypt of Notre-Dame reopens on Wednesday with an exhibition retracing the cathedral’s turbulent history nearly 18 months after it was ravaged by fire.

The April 2019 blaze toppled the spire of the cathedral and destroyed much of the roof of what is one of France’s most cherished national treasures.

The crypt, situated below the square in front of the cathedral and containing the remains of fortifications and thermal baths, had to be cleaned of lead dust, an arduous job that took more than a year before visitors could be allowed back in.

The exhibition pays homage to French writer Victor Hugo and the architect Eugene Viollet-Le-Duc, the two men behind the resurrection of the cathedral in the 19th century.

Hugo’s novel “The Hunchback of Notre-Dame,” published in 1831, was instrumental in winning public backing for the restoration of the monument which had been left in a state of abandon and decay.

“The exhibition starts with how the cathedral looked at the time the novel was published,” said Vincent Gille, a curator at the Victor Hugo museum in Paris.

“It was a frightfully forbidding and dangerous building which bore no resemblance to a radiant and shining cathedral,” he said, pointing to several of Hugo’s sketches as evidence.

The exhibition consists mostly of photographs, drawings, paintings, and film excerpts illustrating the world’s fascination with the cathedral, from the beginnings to the animated feature films of today.

– ‘War against the Demolishers’ –

Notre-Dame was badly damaged by vandalism in the early 19th century, and indifferent city authorities were planning to tear it down when Hugo called for “War against the Demolishers” in a pamphlet published in 1825.

“There is perhaps not a single city in France today that is not thinking about, beginning, or completing the destruction of some national monument,” he wrote.

After the publication of “Hunchback,” the exhibition shows, the French public swung behind the idea that Notre-Dame was worth saving and gave crucial support to Viollet-le-Duc’s work on the cathedral between 1844 and 1864, which laid the foundations for the national monument status it enjoys today.

The inspiration for some features, such as the malevolent chimeras overlooking Paris, came directly from Hugo’s novel, which also, eerily, contained the description of a devastating fire.

Organizers see the exhibition as the first step towards a return to normality for the crypt’s museum, which before the fire welcomed some 170,000 visitors a year.

“The project started very soon after the fire and was motivated by the wish to honor the cathedral,” curator Anne de Mondenard told AFP.

Work on Notre-Dame’s reconstruction after last year’s fire has been plagued by delays due to bad weather, concerns over lead pollution, and most recently the coronavirus pandemic.

It was only in early June that workers began the delicate task of removing tons of metal scaffolding that melted together in the fire — renovation work was underway when the blaze struck.

President Emmanuel Macron in July gave his blessing to a faithful reconstruction of the cathedral’s spire, in a change of heart after previously calling for a “contemporary” touch.