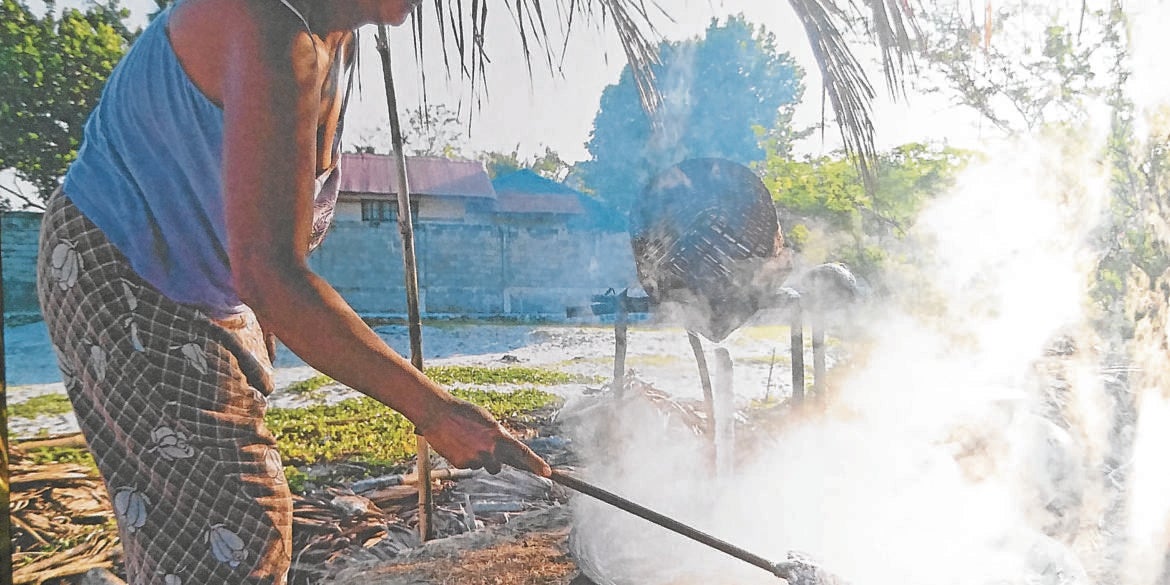 The vanishing traditions of salt making

Ages ago, when the salt beds came into view, we knew we were in Cavite. That was when we could still swim in Cavite because its waters were unpolluted. It was an adventure to be there because we knew we were outside of Manila.

Ige Ramos wrote about his home province for Food magazine in the June 2008 issue and called the salt beds in Noveleta irasan and the storehouses kamalig. He wrote how they were fast disappearing then, probably converted into housing projects, as what had happened to the nipa forests in Bulacan.

For a long time, salt from salt beds was my only knowledge of how salt is made in this country. A visit to Ilocos Sur showed a very different process.

On the beach very near our resort in the town of Cabugao, there were people working very early getting sand from a certain area on the seashore and placing it inside what looked like woven baskets.

Other people then started pouring seawater into that basket with the sand. Seawater dripped down, filtered by the collected sand, and the water was then placed into a vat over a fire.

The vat was boiled for several hours and when the water had evaporated, it produced very white salt granules. The process was recorded in words and pictures in the book, “Naimas: The Food Heritage of Ilocos Sur” (Sanicua Publication, 2015).

Last week, I read a story about another way of making salt, this time in Alburquerque, Bohol, written by Chiara de Castro for an online magazine, Grid. It involves soaking coconut husks in seawater, drying the husks that are “slowly burned into ashes, which will then be collected and filtered into a brine, then finally boiled in earthenware vessels until producing hardened pieces of salt.”

The process, De Castro writes, was written about in the 17th century by the Spanish priest Fr. Francisco Santiago Alcima, but what was used then by our ancestors was driftwood.

Asin tibuok is another name for this kind of salt. It was used as the title of a book by Andrea Yankowski, an anthropologist who studied this particular process and the earthenware vessel used to produce the salt.

The process seems similar to making tultul or salt blocks in Guimaras in the Visayas. Instead of coconut husks or driftwood, anything organic that litters the beach is dried then burned slowly for several days to produce the ash which is then placed in a woven cone-shaped filter. Seawater is then poured over it. The water is caught in a can which is then boiled with a bit of coconut milk to produce the salt block.

Another process was brought to my attention, this time done in the town of Miag-ao in Iloilo. It is called budbod. It is quite different from the others mentioned here and involves many steps.

The salt makers of both Alburquerque and Miag-ao like to call themselves asinderos, a humorous play on the word haciendero, the plantation and landowners of old. But salt making is not as profitable and, because of this, there is a danger that these traditional methods of making salt will vanish.