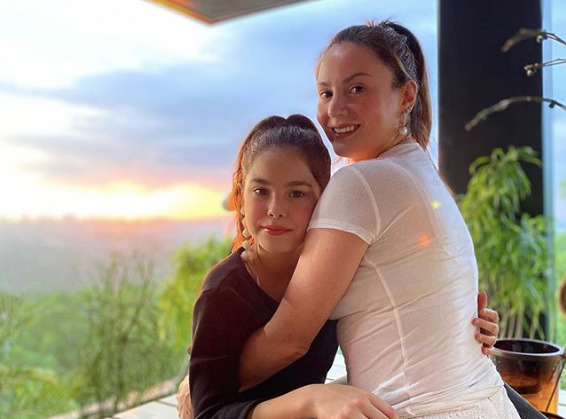 Actress Chesca Kramer sees herself in her eldest daughter, Kendra, in more ways than one.

Kendra is growing up to be like her mom as detailed by Chesca in her Instagram post yesterday, Sept. 9. Posting a photo with her daughter while they are in a tight hug, Chesca noted that Kendra is slowly becoming like her, physically, that is.

“As I was fixing myself in front of the mirror, my little miss comes up to me and says, ‘I want to look just like you and be like you,’” Chesca recalled.

Her daughter then grabbed a pair of her earrings, put it on, painted her cheeks with some blush, tinted her lips and pressed them together, the way Chesca does, until the kid said, “There I look like you already!”

“So many of me I see in her! So many of my ways has become hers too,” Chesca affirmed.

Chesca also expressed her thoughts about being a responsible parent. She believes “it is so important to mould them while they are still young.”

“The kind of parents that we are is reflected on our children,” she believes, adding that “our influence speaks volumes of our parenting. What a responsibility but what a privilege to be given such a task.”

“There is no better person to delegate the role that we are blessed with,” she stressed. “We reap the benefits when we [parents] intentionally loving them, caring for them, shaping and teaching them the way God meant it to be.”

Aside from Kendra, Chesca has two other kids with former professional basketball player Doug Kramer, Scarlett and Gavin. JB