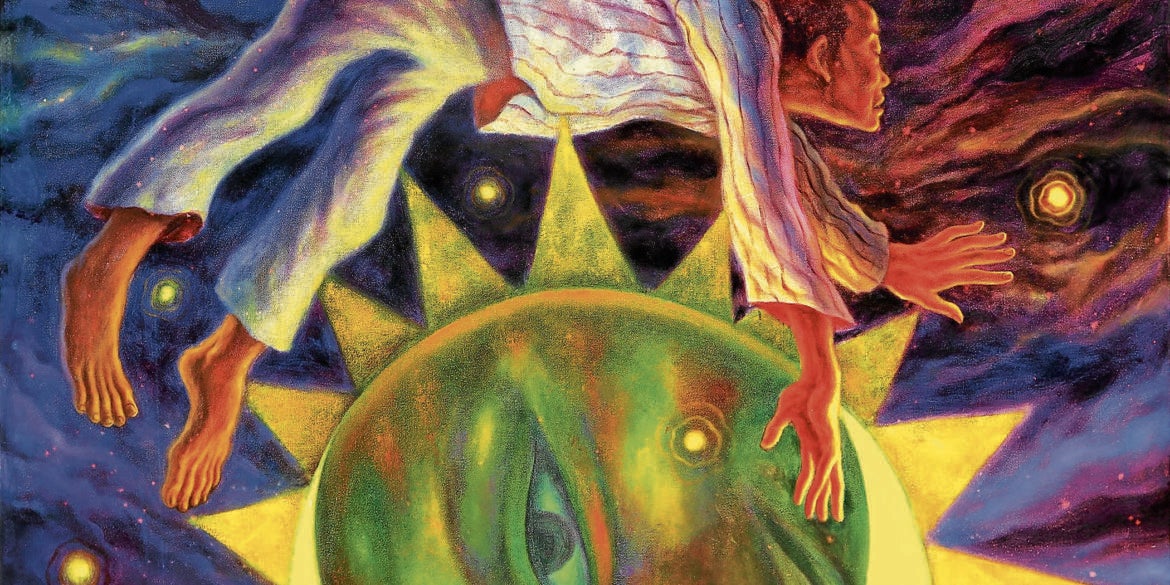 “Untitled (Over the Moon)” by Mark Justiniani

Among the star lots in the Magnificent September Auction by León Gallery on Sept. 19, according to auctioneer Jaime Ponce de León, is “a rare ‘wartime’ Amorsolo, painted in 1945.” “Instead of the usual sunlit scene,” he added, “this work—titled ‘The Offering’—is incandescent with the light of a fire.”

Another intriguing work is “the seminal ‘Typewriter,’ which is among the first of the highly coveted ‘grid paintings’ of Rodel Tapaya,” Ponce de León said. “If you look closely at the piece, you see that it is composed of ribbons of text that are actually meaningful yet cryptic passages of prose.” This piece was finalist at the influential Philip Morris Art Awards of 2003.

A charming Anita Magsaysay-Ho, said Ponce de León, is a rare find that was scooped up by a knowledgeable (and very lucky) buyer at an American estate sale on the East Coast. It is in “classic egg tempera,” he added. “These discoveries are now few and far between because of the internet, but if you have luck on your side, it can still happen.”

Another nostalgic but contemporary work is Joven Mansit’s “Concepcion,” in which he turns an old photograph of a 19th-century Filipina into a large-scale painting in sepia tones, adding an image of the Concepcion, one Magellan’s five ships, on top of her head. “You can say that it references the upcoming quincentennial of the first circumnavigation of the world,” said Ponce de León.

A stunning array of abstract masterpieces are also among the auction highlights. “Diaphanous B-XXXVII” (1980) is Romulo Olazo’s masterpiece from his acclaimed series. It showcases what Ponce de León termed as “his instantly recognizable” translucent, geometric layered forms out juxtaposed with transparent light. Gestural brushwork, on the other hand, is at work in Augusto Albor’s “Romancing the Space IIA” and “Romancing the Space IIB.”

National Artist BenCab’s 1992 “Boy Afraid of Tremors” is a personal piece, drawn from memories of the Baguio earthquake. The magical realist quality of Mark Justiniani’s “Untitled (Over the Moon)” invites the viewer to look at one’s life journey through life with childlike eyes.

Yasmin Sison captures the carefree state of a child in her resonant work, “Sophie and the Goldfish.” Geraldine Javier is represented with “Half-Finished People Series – Case 3 of a Man.” Marina Cruz explores the allure and narrative qualities of everyday objects, like clothes, in “Those Tiny Yellow Flowers.”

International superstar Ronald Ventura combines delicate mages with profound details in his 2013 piece, “Cage.” “A work such as this is rare to find in the market,” said the León owner. “I wager it would take you several years’ wait and a sizable amount if you were to commission a work from Ventura.” Another Ventura work, “Surprise,” “also has a special playful appeal,” he added.

Rising artist Ian Fabro, inspired by Spanish Baroque painters, gives off a sense of revelation in his expressive piece, “And You Shall Be Delivered,” an intense representation of St. Michael the Archangel.

Rare and iconic maps are also set for auction. The important Ramusio-Gastaldi Map, said map scholar Leovino Garcia, “is considered the ‘birth certificate’ of the Philippines.”

“This legendary Ramusio-Gastaldi Map gave the name ‘Filipina’ to our beloved Inang Bayan,” he explained. It is also the earliest map of its kind available in the Philippines now.

The museum-quality Chatelain Map has been hailed as one of the most informative and decorative, elaborate maps on the Pacific. Found only in a few famous libraries such as the British Museum, it features five voyages across the Pacific, including that of Magellan-Elcano in 1520.

A third map, the Linschoten Map, was “a product of daring espionage,” said Garcia. It would break the Portuguese monopoly over the Spice Islands. This watershed map is in the league of the Spice Islands Map of Petrus Plancius which went for P4 million in a recent León auction.

The map displays a gorgeous blend of mythical details and Portuguese maritime knowledge at the time. It is decorated with sea monsters, indigenous animals, two compass roses and sailing vessels. —Lito B. Zulueta and Dexter Matilla INQ

León Gallery’s Magnificent September Auction is in partnership with ANCX.ph, the online lifestyle site of ANC, the ABS-CBN News Channel.