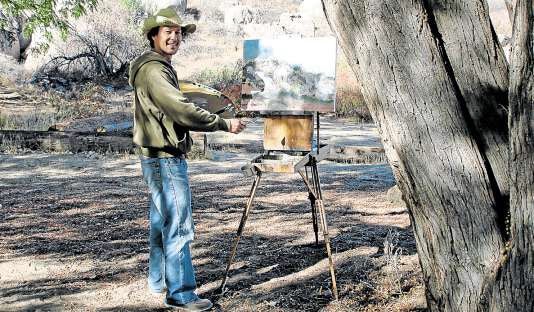 A passerby observing an artist brushing strokes in the open air may have the impression of an artist working solely from optical phenomena. Outdoor painting is a form of art that requires rapidity to capture the sensual acuity of the precise moment: vagaries of weather, the fleeting speed of light and shadow. En plein air actually spells the difference between a camera and the human eye where the five senses are at work: sight, aroma, sound, texture, savor.

Plein air involves neither sporadic nor impromptu brushstrokes but a visual judgment the senses make on the spot. There is no script the actor can assay over time to give it a predetermined look, as a studio artist would do. That is the reason Raul Deodato Arellano calls himself an actor without a script. One appreciates the missing script when you learn that Raul was actually an actor. The unscripted narrative of his art actually forms the tension of his artist’s mind.

Arellano appeared in three films by Raymond Red, the pioneer of modern Filipino alternative cinema who won the Cannes Film Festival Palme d’Or in 2000 for short film for “Anino.” After some time, Arellano relocated to the United States to study at the Film Institute of Chicago. But painting beckoned. “In Chicago, I was always drawn to the museum and the life-painting classes at the building across. So every day I would hang out at the museum and join the life-painting classes in the afternoons.”

He moved to California where he formally studied painting at El Camino College in Torrance. When he landed his first job as a security officer in a nursing home, he sketched portraits of resident patients and work colleagues in his spare time. “When I worked as a forklift operator at ReadyPac, I was always trembling with exhaustion at the end of each workday. As soon as I got home, I painted. I sometimes fell asleep painting.”

“I finally got a job where I was paid for doing art. I was an assembly line artist mass-producing exact artworks for use in hotels. I didn’t get to exercise creative freedom but I got to hone my skills and improve my endurance, painting for seven hours. It was there that I attribute the good work habits I developed and kept until today.”

His childhood was spent in Davao City, his mother’s hometown. “I started scribbling on books when I was 15.” In third grade, the palabunutan was in vogue among children, where one picks a number from a vendor’s cart and gets to win a prize. He brought his own stylized version in school. “I remember drawing Kundiman, Barok and Kurak to promote the game. The characters were drawn in a comic way with a cloud dialogue that says ‘bubunot ka ng singko, pwede ka manalo ng bente!”

But there is more to explain Arellano’s proclivity for art. Call it pedigree that he sometimes wishes to rather avoid in carving out his own identity. Grandfather was the great architect of colossal Filipino architecture, Juan Arellano. Arellano was born five years after Juan Arellano’s passing.

“When my relatives told me my brushstrokes were similar to his, that was the time I became more interested in what he was like as a painter. Because he was widely remembered for the structures he built, most of the attention was there. You have to be in some kind of exclusive circle to have the privilege of having a glimpse of his paintings.” His second name Deodato also associates him with the Katipunan propagandist Deodato Arellano, Juan Arellano’s uncle.

His plein air masterpieces have attracted collectors in the United States. “Portuguese Bend,” painted in the famous seascape of that name in the Palos Verdes Peninsula on the California coast, is now in the possession of an American architect collector. The craggy outcrop comes alive in a sunburst of tones interplaying between serene sea and sky. Raul’s desire is for plein air to make a head start in the Philippines where the method remains inchoate.

“In plein air, there is what I call a stage of intoxication. An artist looks at the effects of the explosion of colors while squinting the subject under the sun.” It is an obsession that seduced the notables of plein air. Claude Monet painted one setting severally to capture the change of light and the passing of the seasons.

Raul Deodato Arellano’s colors provoke the viewer to savor the scene as it was seized sensually in a moment of transience and immediacy. “Painting plein air is like entering into a labyrinth—one cannot predetermine the play of light and shadow and hence how the artistic rendition will end.” The mountain atelier retreat he keeps on the boundary of Nasugbu and Calaca in Batangas province makes him grounded on the whims of light and shadow. His art captures the gist of time’s stroking seconds as it fleets capriciously, never to be sensed again. —CONTRIBUTED INQ