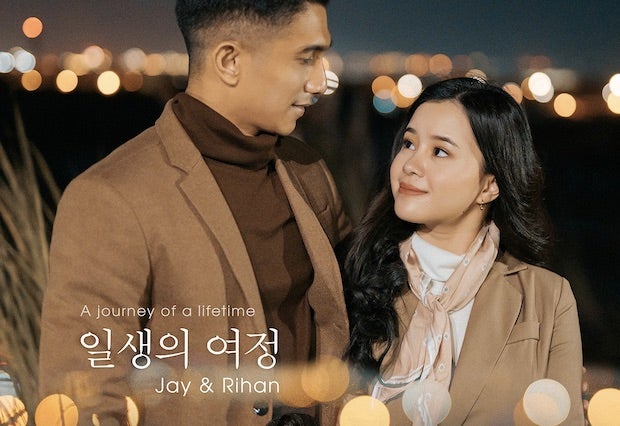 MANILA, Philippines — This couple awed netizens with their love-filled and stunning pre-wedding photos of their Korean drama-inspired settings and traditional engagement ceremony.

Shot by the team of Outloud Studios and James Montaño Photography, Sakaluran said in a Facebook post that their prenuptial photos and video featured the “beautiful places of Soccsksargen.”

As of writing, the couple’s CLOY-inspired prenuptial photos have been shared by over 4,600 people and garnered over 18,000 reactions and 1,100 comments.

“The photographers and videographers and the whole team that made it really special and successful,” Sakaluran told INQUIRER.net in an online message.

“I was really hooked with the Korean drama CLOY. I love their characters and Captain Ri as a soldier really suits my husband [because] he is a police officer so I told him na ‘Let’s do a CLOY-inspired prenup’,” she told INQUIRER.net

“He also watched CLOY as he is also a Korean drama addict,” she added.

From Seoultan Kudarat and North Zamboanga🤣“At the end of that long dream, I finally made a choice. That even if I go…

The congresswoman also shared snaps of their “Salangguni” or engagement ceremony.

The congresswoman said they had to make a lot of changes for the ceremony, which was initially scheduled last June 28.

“Our estimated guests were like 1,000 guests but because of the pandemic it was cancelled. Then, my grandfather po Sultan Datu Pax Mangudadatu decided to push through our salangguni/pagturul tayma/engagement after the lockdown,” she said.

“Then, we decided to have it held in our farm house and it was a family gathering only,” she added.