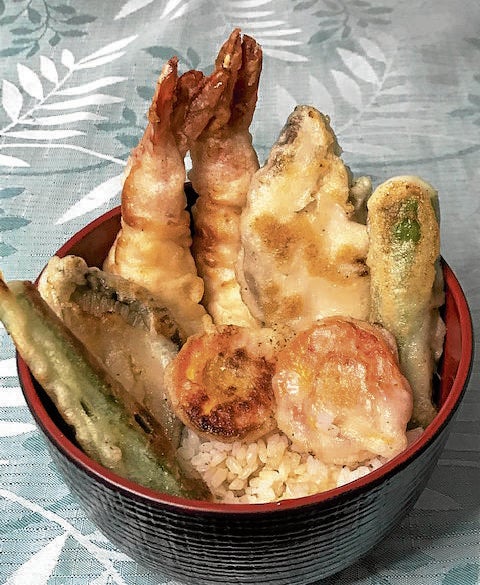 Many of us are familiar with the Japanese dish tempura. Basically, it’s battered and fried shrimps (or prawns), other seafood such as fish and cuttlefish, plus vegetables, all served with a dipping sauce made with grated radish, ginger and soy sauce.

Very similar to tempura is a dish called tendon, or tempura donburi. Donburi is rice in a bowl with assorted toppings. The toppings can be anything from chicken and vegetables to fish. In the case of tendon, the topping is shrimps cooked like tempura. Usually the sauce for donburi is splashed on the rice and on some of the toppings, rather than being served separately.

Unlike the tempura dipping sauce which is savory, the sauce for tendon is rather sweet. Made with sugar, soy sauce and a sweet rice wine called mirin, this dipping sauce is simple yet appealing.

Try serving tendon at home one of these days. It’s a sweet and appetizing alternative to tempura.

For the vegetables:1 c flour

4 okra, trimmed and cut into halves or thirds

For the dipping sauce:

Prepare the shrimps: Wash the shrimps well and pat dry. Remove the heads. Peel the shrimps but leave the shells on in the tail section. Cut a vertical slit on the back of each shrimp with a paring knife and pick out the black, string-like vein.

Turn the shrimp over and make small diagonal cuts on the entire length of this side. This is to stretch the shrimp and keep it straight during the cooking process.

Position the shrimp flat on a cutting board and scrape off the dirt on the tail. Snip off the sharp, pointed part in the middle of the tail. Chill the shrimps in the refrigerator for several minutes (this helps to make them crisp).

In a bowl, blend together the flour, iced water and baking powder. You should have a slightly thick but smooth consistency. Stretch each shrimp to straighten it, then dust lightly with flour. Dip each floured shrimp in the flour and water mixture.

Heat the cooking oil in a large wok or cooking pan to medium. The oil should be hot enough to sizzle. To test if it’s hot enough, drop a small amount of flour in the oil. If it sizzles, then the oil is ready to use. Reduce heat to medium-­low.

Deep fry each shrimp in the hot oil, about four pieces at a time, until it turns a bright yellow color, about two to three minutes each side (do not overcrowd the pan). Transfer the cooked shrimps to a wire rack or a plate lined with absorbent paper. Keep warm while cooking the vegetables.

Prepare the vegetables: In a bowl blend together the flour, iced water and baking powder until the mixture is of a thick, smooth consistency. Dip the sliced carrots, mushrooms, eggplants and okra in this mixture. Reheat the same oil used for cooking the shrimps. Fry the vegetables in the oil until tender-­crisp and a bright yellow color. Transfer to a rack or a plate lined with absorbent paper.

Make the dipping sauce: Heat the mirin in a saucepan until the alcohol evaporates, about one to two minutes. Add the sugar and soy sauce and bring to a simmer while stirring occasionally. Simmer until the sugar melts and the mixture thickens.

To serve: Spoon some rice into three or four individual Japanese bowls. Distribute the shrimps equally among the bowls. Add vegetables as desired. Drizzle some of the dipping sauce into each bowl (you can serve some extra dipping sauce on the side).