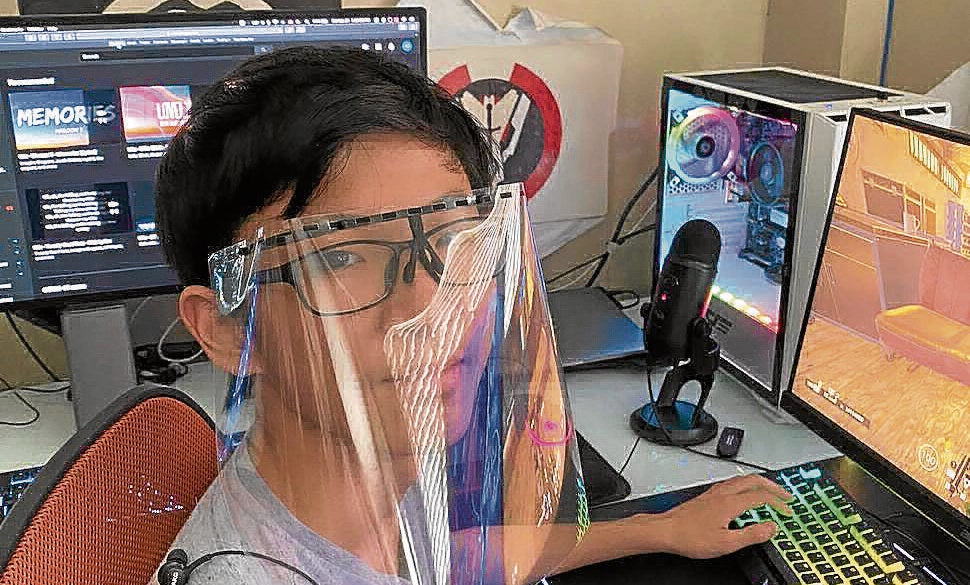 Various individuals and groups in the Philippine community have found multiple ways to reach out and help others during this difficult time by starting fundraisers, like International School Manila’s “Artists for COVID-19,” donating personal protective equipment to various hospitals, starting initiatives to support local farmers and small and medium enterprises, making cards for patients confined in hospitals, and much more.

Marcus Chu, a Grade 10 student at International School Manila (ISM), 3D-printed face shield holders which were distributed to hospitals all around Metro Manila through a company called Meta-Tech Lab.

Meta-Tech Lab has also set up a 3D Printer Farm in the University of the Philippines Diliman which has 15 3D printers. They were able to produce 150 face shield holders per day.

Marcus said that he got the idea from a Facebook post asking for 3D printer filament donations. “My dad’s friend, Erik Lacson, spearheaded this idea of 3D printing face shield holders for the frontliners. Considering I just got a 3D printer from my parents for Christmas, I realized that I could 3D print them myself.”

He initially used a standard open-sourced design, but found it too time consuming and the design used excessive amounts of filament. Marcus decided to create his own design.

“With my dad’s help, after 12 prototypes, I managed to make a design that was faster to print and used much less filament than any other design I have seen. Despite it being based off of the first design, the end product looked quite different.“

The material Marcus used is polylactic acid, a vegetable-based plastic material made from cornstarch so it’s biodegradable.

On average, he produced over 20 face shield holders each day.

Nick Ng, a Grade 10 student at British School Manila (BSM), founded Bakecare, an organization that aims to share the act of caring and gratitude toward people in need through baking and writing notes for them in order to lift their spirits.

Nick started to bake for hospitals in late March. “It’s a way to offer them thanks and gratitude for keeping us safe.”

Twice a week, he baked banana bread, packaged it and delivered it to various hospitals. Nick alone was able to donate to five hospitals. After founding Bakecare, his organization now had volunteer bakers from various schools such as BSM, ISM, CCF Life Academy, and St. Paul’s Academy. They have delivered to seven hospitals in different cities in Metro Manila, and aim to donate to more hospitals moving forward, including those outside Metro Manila.

Bakecare has donated over a thousand portions of baked goods, ranging from banana bread and brownies to milk buns and cinnamon vanilla cakes.

There is another part of their delivery that is quite significant. “We don’t just send baked goods to these hospitals as that alone doesn’t fully paint the picture of what we hope to achieve,” Nick said. “Each delivery includes a handwritten message. Not only are we giving these front-liners treats, but also a thank-you message to lift their spirits.”

When the pandemic ends, Bakecare plans to donate to orphanages, retirement homes, and other organizations and establishments. “If there’s anyone in need, we’ll always strive to show support to them,” said Nick.

At the beginning of the lockdown, Dickinson wanted to sing to entertain others and lift their spirits.

“John Legend and Chris Martin have had at-home concerts in their recording studios,” said Dickinson. “I thought maybe I should do that!”

He only intended to do the concert once, but after numerous requests, he decided to do it again. “I only knew around 8 to 10 songs that I could sing and play on the piano. But the morning after the first concert, I received a flood of around 120 emails saying, ‘That was great! Do it again!’ It was a bit more difficult after that since I had to learn new songs, so I did and I ended up doing [some songs] karaoke style.”

Through this concert series, Dickinson has raised about P300,000 for ISM’s Disaster Relief Fund. “We would receive P1,000 here and there. The most generous donation was from the SyCip Family Foundation. They donated P60,000.”

He added, “So many members of the ISM community have been so supportive and I’m really thankful.”

Dickinson’s concert series has even received attention outside the ISM community. “I saw some alumni who used to be my students in Grade 8 Science, and it was nice to see their faces pop up in my Zoom since I haven’t seen them for a long time. This has been a great way for the community to bond which is quite important considering our current situations all across the world.”

The actions of Marcus, Nick and Dickinson show us how much taking initiative can truly aid our front-liners and our community during these difficult times. Everything helps, no matter how big or small. —CONTRIBUTED

The author is a writer for the Bamboo Telegraph, International School Manila’s student publication.