The many faces (and voices) of Paris Hilton | Inquirer Lifestyle ❮ ❯ 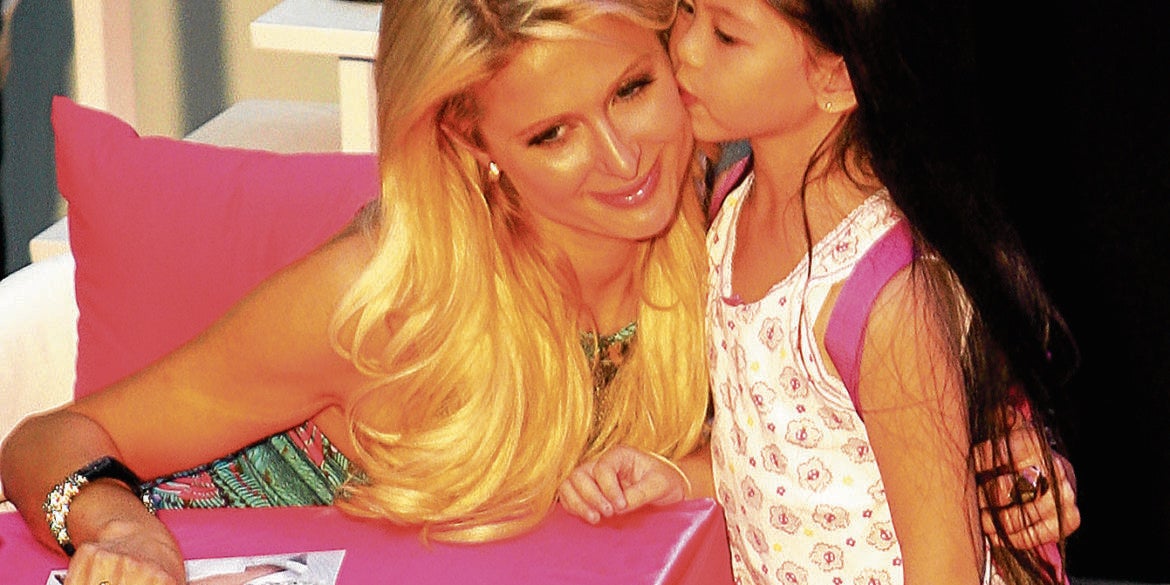 The first time I saw Paris Hilton, I barely saw her.

It was in Beverly Hills in 2008, at the end of what had been a week of around 50 celebrity interviews. I was exhausted, I was headed up to my hotel room, but when someone in the elevator said, “Paris Hilton is in the lobby,” I knew I couldn’t miss my chance.

Since she broke into public consciousness in the early 2000s, Paris Hilton had always been a polarizing figure. While the hotel heiress had fans around the world, many people loved to hate her. Mocking her was practically a sport. People relished every chance to make fun of her, this person they saw as a rich, spoiled, vapid brat. And she did provide plenty of fodder for punchlines.

There was that voice—that baby whisper that unleashed upon the world catchphrases like “That’s hot” and “Loves it.” There were the outfits—Juicy Couture tracksuits in every color paired with chunky Uggs. There were wild nights at clubs. There were ridiculous dumb blonde moments. (“What is Walmart? It’s like they sell wall stuff?”) And, of course, there was that sex tape.

I must admit I cracked jokes about her too (it’s just so hard not to) but I never thought that she was dumb. She knew what she was doing and she was good at it.

And I loved her, I truly did. I actually bought original DVDs of her reality show “The Simple Life”—all seasons. Her songs “Stars are Blind” and “Nothing in This World” were mainstays on my playlists. I enjoyed watching “House of Wax.” I got a copy of “Confessions of an Heiress” as soon as it came out and, yes, I read it.

I was so fascinated by Paris Hilton that I wrote about her in both my books.

I loved Paris because she was everything I was not. She was Barbie-come-to-life while I think of myself as “the before of a makeover.” Hers was a world of luxury while I lived paycheck to paycheck. She sparkled in pink while I brooded in black.

But it wasn’t just that. I loved that she loved animals. And I loved how kind she was. This was easy to see in episodes of “The Simple Life.” Nicole Richie was the fun, crazy one. Paris was the kind, sweet one. And she seemed to be living this carefree, fantasy life that the rest of us could only imagine.

Back to that hotel lobby when I first saw Paris. She was wearing a baby blue tracksuit (Juicy, probably) and a blue baseball cap. A camera man followed her. She got into her car—a powder blue Bentley that, of course, matched her outfit. She stuck her arm out the window and said, in that soft, familiar voice of hers, “Bye, guys!”

I had spent that week interviewing a really long list of actors that included the cast members of all three CSIs, Patricia Arquette and Michael C. Hall, but it was Paris who left me gaping like an idiot long after she had left.

I had no idea then that I’d end up seeing her again. And again.

Fast-forward to 2011. We were inside the Paris Hilton Handbags and Accessories Store in SM Megamall and the doors were shut for good reason. It was pandemonium outside. A crowd of over 5,000 people had gathered to see Paris. Earlier, I had asked the guards if they’d seen a crowd that big gather at the mall for any other celebrity. “Not like this,” they said.

But Paris wasn’t fazed. “I’m pretty used to it,” she said. “I do store appearances all the time around the world and it’s always very crazy. Sometimes it gets too crazy but I love my fans. It’s so flattering that they love me so much, it makes me feel really happy.”

On that trip, Paris got mobbed by fans everywhere she went. At a press conference, a girl asked Paris to sign her forehead.

I spent that week following her around and writing so many stories about her—her Azure Beach Club project with Century Properties, her friendship with Manny and Jinkee Pacquiao, the Filipino designers whose clothes she wore on her visit, her 17 product lines. But what struck me the most was how she treated her fans. She really connected with them.

Isha Dinio, who called herself Paris’ No. 1 fan in Manila, had a sweet moment with her at a press conference. They exchanged presents and hugs. But that’s not all. Isha actually got to spend time with Paris during her visit, on their own, away from the cameras.

Later, I would discover that Paris really makes it a point to DM her biggest fans so she could meet them when she’s in their city. How many other celebrities do that?

“I love my fans so much, they mean the world to me,” Paris told me during an interview. “I love the Philippines, I couldn’t wait to come back.”

‘Be a good person’

Three years later, she was back and I was once again assigned to cover her trip. I started joking that I had become the paper’s Paris correspondent. Her 17 product lines had become 18 and she was in town for the Beach Club’s opening. And because Paris had become a DJ at this point, she surprised fans by spinning at the party.

I sat down for an interview with her before the party. This time, there was no publicist in sight so she was more relaxed. She spoke more freely. She lit up as she talked about music, her fans and her visit.

“I just want to make people smile, make people happy, entertain people and make a difference,” she said. “It’s all about being confident and believing in yourself and knowing your dreams can come true if you really believe in them. Don’t listen to anyone else. Be a good person and good things will come to you.”

Say what you will about her but those who’ve actually spent time with her keep using the same words to describe her. Sweet. Kind.

And say what you will about her, but while you were cracking jokes, this “ditz” managed to build an empire (19 product lines now), invent a new kind of celebrity, and become a disruptor before disrupting was even a thing.

Fast-forward again, this time to 2020. Paris just dropped a bomb: “This Is Paris,” the documentary directed by Alexandra Dean, that reveals an entirely different side to the heiress—the real her, she said.

Her sister Nicky, who’s usually not big on interviews, appears in the documentary as well “in order for this to be genuine and authentic. There’s no one in the world who knows her better than me.”

“Her brand is a lot more glamorous than she is. She’s a chick who likes to scrapbook at home with her dogs, eat leftovers… She sounds like Homer Simpson. No, but she’s very normal,” Nicky chuckled as she talked about her sister.

Paris said, “I feel like the world thinks they know me because I’ve been playing this character for so long. That’s not me.”

The whole dumb blonde thing was an act, she said. And everyone—including those who kept making fun of her—fell for it.

Perez—yes, Perez, not Paris—Hilton had tried to tell the world that in 2007. In an interview with the Los Angeles Times, Perez talked about Paris. “She has a baby doll voice that she puts on camera and TV a lot of time, but the smart, different, real Paris doesn’t talk like that. It’s all a bag of tricks.”

There are many revelations in the documentary including how hard it is for Paris to trust people. “She’s been betrayed so many times,” said Nicky.

Paris talked about what might still be the biggest betrayal yet—her ex-boyfriend leaking that sex tape. “It was my first real relationship,” she said. “That was a private moment with a teenage girl not in her right headspace. Everyone was watching it and laughing like it’s something funny. If that happened today, it would not be the same story at all. But they made me the bad person.”

She added, “It was like being electronically raped. And for people to think that I did it on purpose… because after that all these leaked tapes were coming out and it almost became a blueprint to become famous. I didn’t need to do that. I always had a plan.”

But the most surprising revelation of all is the trauma she suffered while at Provo Canyon School in Utah, one of the institutions her parents sent her to as a teen when they felt that her partying had gone out of control. That experience has caused her so much pain, pain that she’d been hiding under all the glitz and glamour.

In the documentary, Paris reunites with former schoolmates and fellow abuse survivors to make a stand against the school and other similar institutions. (Visit the website elan.school too—it’s a horrifying but important read.)

“There are other celebrities who went through PCS but you’re the first one to speak up,” Katherine MacNamara, a former Provo classmate, told Paris.

“It needs to stop,” she replied.

“How many voices do I have?” Paris asked at the beginning of the film. A lot, it turns out. But the real one is deeper, a lot deeper than that baby voice she’s been using all this time.

“I don’t know if my nightmares will ever go away but I do know that there’s probably hundreds of thousands of kids going through the same thing right now and maybe if I can help stop their nightmares, it will help me stop mine.”

Paris Hilton has found her voice and she’s used it to break the silence.