The gift of a long life | Inquirer Lifestyle ❮ ❯ 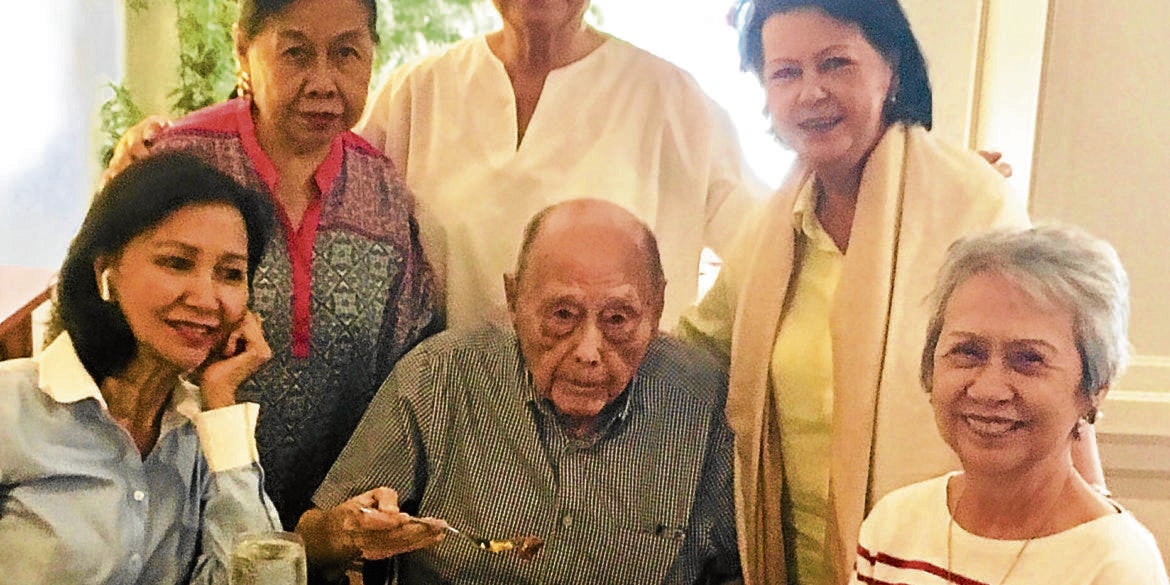 Last date, December 2018, a few days before the fall: Tito Peping (center) with daughter Malen to his left and nieces (from left) Tina, Ninit, the author, Sylvia

The gift of a long life

The Roces genes are legendary; living into the 90s is more or less the rule. But this pandemic has been a challenge. It has scarcely eased, and our ranks have already lost more to it than at any equally short period in the past.

Except for a cousin from our Iloilo branch, Gloria Roces, 83, who went in her sleep in her home in the Austrian capital of Vienna in early January, two other cousins, Beneting Legarda, 94, whose maternal grandmother was a Roces, and Tanya Verzosa Qua, 87, whose mother died in the hospital of complications from the new coronavirus disease (COVID-19). By our standards, admittedly, they were not the super seniors their numerical age seems to imply—their health may have been compromised—but their demise was nevertheless unexpected.

My dad’s four living brothers are 100 (on Tuesday), 98, 90 and 88, there manning the family front line like a buffer for my own generation. I am 80 myself, and comparing myself with the run of octogenarians alone makes me feel younger. My own dad left us at 91, in 2010.

Tito Peping will be the first to reach 100, though. What is amazing is he’s as lucid, even sharp, as can be. When he sees me, for instance, he asks if Vergel has made friends with Duterte yet, which is more amazing than it sounds, considering that Vergel is my second husband, and he has known both.

More amazingly, he’s still in communication with his stockbroker, announcing in the time of the pandemic, “Buena hora para comprar!” Given his standard advice that investments in stocks are necessarily long-term, he is obviously sanguine beyond his age. Lately, however, his eyesight has been dimming due to macular degeneration and, along with it, his hearing. I’m sure he misses his favorite Spanish romantic songs.

Malen, his eldest daughter, who has moved in with him, says she and “Sport”—he prefers to be called that by his grandchildren and grandnephews and grandnieces, instead of Lolo or Abuelito—communicate like two opera singers in the same scene, singing to each other face-to-face, which can be pretty exhausting for both, I suppose.

For this birthday, Malen has prepared a gift list—much like a bridal registry—of his favorite foods, to avoid duplication. Apparently, his appetite remains robust. She asked that our food gifts come with a short note. “Not too long; remember, I have to sing/shout it to him.”

Tito Peping started celebrating his birthdays in a grand way when he took over the role of patriarch from his first cousin, Marcos Vidal Roces, who left us at 96, in 2014. Tito Marcos, although bedridden after a bad fall, had been himself lucid until the end. According to his granddaughter, Genevieve, he hated to admit the rest of his body was no longer as active as his mind. He was in the second wave of the allied landing at Normandy.

For many years, we all looked forward to Tito Peping’s birthday dinner at the Quezon City Sports Club—the guest list must have been copied from the Christmas list of his sweet and beautiful wife, Tita Carmen, known for missing no one. Because of the near-perfect attendance of representatives from the Roces-Reyes and Roces-Pardo relatives, it was the closest thing to a family reunion. At the end of every birthday dinner, Tito Peping would confidently say, “You better be here again next year!”

The parties, however, stopped after Dec. 28, 2018, when he fell in the bathroom; he injured a hip and has refused surgery. He was, Malen recalled, perhaps the most disappointed of all. Indeed, the fall and this pandemic have put on hold all family gatherings.

Regular lunch dates with nieces became home visits, which were timed between sessions of nebulizing for his asthma, which he did every three hours. A widower for many years, never remarried, he had continued dating, former sweethearts, widows themselves, and he also timed his dates between nebulizing sessions. But, even before he became bedridden, he stopped, not only because he was outliving his dates one by one, but also because, according to him, the quality of the conversations was deteriorating.

What has kept him thriving is the devotion of his family, intimate and extended, and of friends he’s kept all his long life. In fact, after some of them had gone ahead, their wives and children have continued the relationship. The pandemic made the visits fewer, naturally. When a daughter and her husband became stranded in Palawan, he kept asking for daily updates about them. When finally she made it back, she visited, masked and face-shielded, to which he reacted, “Que OA tambien!”

His mom, my grandmother, Lola Enchay, who left us at 92, described him, her fourth of nine sons, as “un buenochon …le tienes que querer.” She was right: He was easy to love.

And he continues to inspire us all to be grateful for the gift of a long life.