Is virtual theater the future of the PH stage? | Inquirer Lifestyle ❮ ❯ 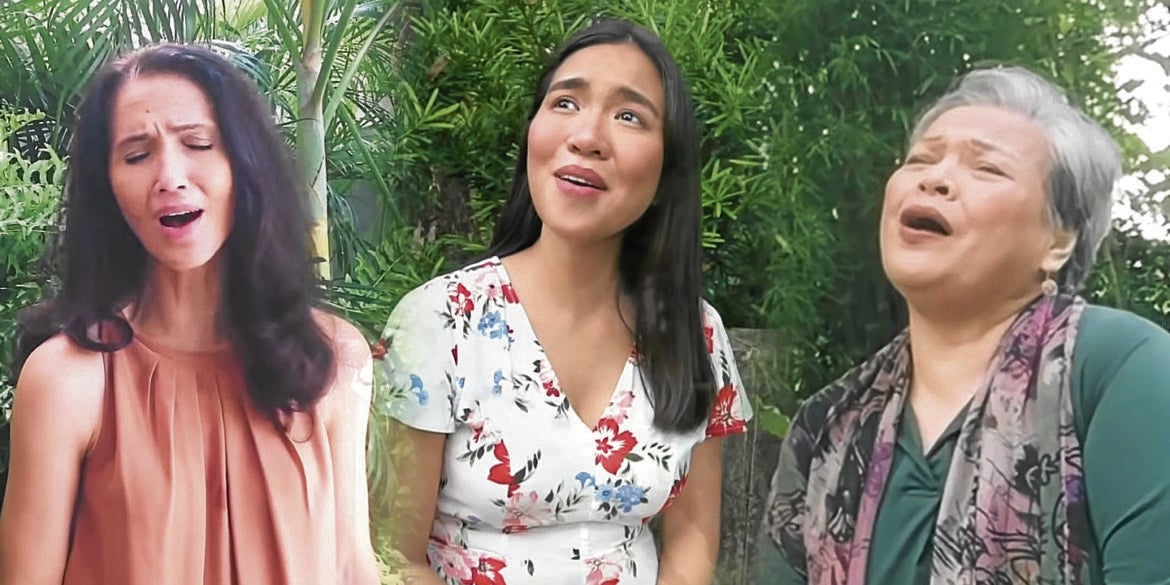 Menchu Lauchengco-Yulo, Aicelle Santos and Sheila Francisco costarred in “Tatsulok: A Trilogy for Change,” a musical revue produced by PLDT Home and Gabay Kalikasan that premiered on social media in July.

Is virtual theater the future of the PH stage?

Is it sustainable? If, for example, 'El Bimbo' were to hold cinema screenings, would enough people pay to see it?

Four months ago, a video recording of “Ang Huling El Bimbo” streamed for free on Facebook and YouTube as part of ABS-CBN’s fundraiser for the new coronavirus disease (COVID-19) pandemic. In just two days, the musical reached seven million views and raised over 12 million pesos.

Those were unquestionably impressive numbers, though to be fair, “El Bimbo” was an easy sell. A massive hit at Resorts World Manila, where it played 115 performances in the span of a year to some 150,000 people, it could rely on solid word of mouth. The show’s use of the Eraserheads’ music was also an attraction in itself, and would have lured even those who did not identify as theatergoers but were fans of the seminal band. Plus, the audience was already essentially “present”: Anyone with internet access anywhere in the world could watch the show—and donate to the cause.

Nonetheless, the case of “El Bimbo” proved that, with the proper publicity and the “right” material, there can be a future for streaming theater in the Philippines. The question now—six months into this crippling pandemic—is how to make it work.One may as well begin by stressing the importance of the quality of the recording. This was never a problem for “El Bimbo”; at Resorts World Manila’s Newport Performing Arts Theater, the shows were always accompanied by a “live recording,” as strategically stationed cameras beamed the ongoing performance on either side of the stage. (Suddenly, what used to be a distracting feature of the theater became its asset.)

But “El Bimbo” was a rarity: Numerous companies also released archival content on the internet, such as Dulaang Unibersidad ng Pilipinas’ “Ang Nawalang Kapatid” and Philippine Educational Theater Association’s “William”—but often, these recordings were poorly captured and frustrating to watch.

And in any case, “El Bimbo” was no global pioneer. London’s National Theatre and New York’s Lincoln Center have been in the business of streaming theater for years, recording their shows as if they were shooting films and releasing them in cinemas or through broadcasters like PBS. In fact, when the pandemic struck and London theater shuttered, the National Theatre was one of the first to launch these online shows-for-a-cause initiatives. For Filipino viewers, that meant free and previously impossible access to Tom Hiddleston’s “Coriolanus,” for example.

But is such a model sustainable in the Philippines? If, for example, in a postpandemic world, “El Bimbo” were to hold regular cinema screenings, would enough people pay to see it?

It’s a tricky question to navigate at the moment, and using First-World examples such as the National Theatre, or even “Hamilton’s” tie-up with Disney+, to assert the financial viability of this future won’t be very convincing.

It’s even trickier for original material—this alien thing we now call virtual or “Zoom” theater, after the video conferencing app that artists worldwide have used as a stage. Now the question starts at the time of inception: Playwrights must now tailor their material to the virtual media, with Zoom screens in mind, while actors, directors and designers must navigate their craft in this strange in-between of film and physical theater.

The early local examples can be seen as stepping stones to this forced transition. Playwright Layeta Bucoy, for instance, wrote for Tanghalang Pilipino a trilogy of “monovlogs” that tried to unpack the human experience of COVID-19, the second installment of which starred screen legend Nora Aunor as the eponymous “Lola Doc.” Gabay Kalikasan, an advocacy arm of PLDT-Smart, did a couple of revues employing many from the cast and creative team of “El Bimbo”—first, “Songs for a Changed World”; then “Tatsulok: A Trilogy for Change.”

The recent Virgin Labfest, the Cultural Center of the Philippines’ annual festival of new one-act plays, might just be the biggest such effort yet—and perhaps the most insightful.

For one, the most successful entries of this year’s edition, which unfolded on the video platform Vimeo, were those that figured out how to transpose to the screen a script that was originally intended for the stage, such as Floyd Scott Tiogangco’s “Pilot Episode,” which surely benefited from having filmmaker Giancarlo Abrahan (“Dagitab,” “Sila-Sila”) at the helm. And as longtime festival production manager Nikki Garde-Torres shared, the dip in this year’s revenues was countered by a huge rise in viewership—audiences from a wider geographical catchment—reflected in the postfestival numbers.

Especially in the past decade, Filipino theater has often been touted to be a “booming” industry, but in fact what this “theater” refers to has been largely confined to the stages of Metro Manila—the unfortunate product of, among other factors, theater journalists of prominent publications being mostly based in the capital and therefore covering only shows in that region; and the congregation of talent, from professional theater companies to universities with reputable training programs, in that same, insular space.

Virtual theater is just about our best answer now to solving this question of access—of whose theatrical creations get to be seen and who gets to see these creations.

Live theater is irreplaceable. But now we must also embrace virtual theater, whether streamed recordings of existing shows or completely new productions, as a vital part of the landscape. Doing so will not only be in support of sustaining the art form while the pandemic rages on; it will also be a step toward realizing a truly democratic Filipino theater. —CONTRIBUTED INQ