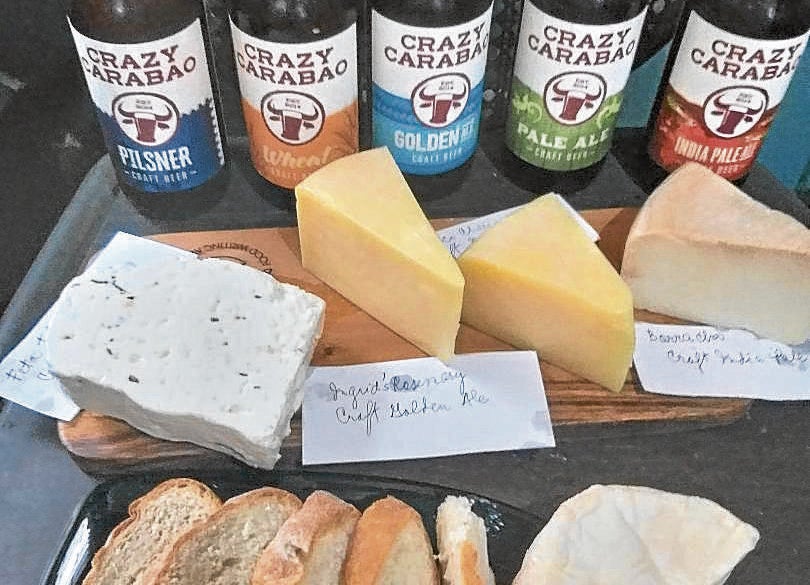 Beer and cheese prepared for tasting, complete with labels

This virtual tasting session was a new thing for me.

The invitation came from The Tasting Club, founded in New York by Kevin Charuel, who is French, and was trained and is experienced in the wine industry, and his Filipina wife, Adrienne. They have since settled here and continued the club activities. Patrons are guided through the tasting of wines, spirits and cocktails that are sometimes paired with food for a more heightened experience, says Charuel.

Our session was pairing beer with cheese. The beer was from Crazy Carabao, craft beers produced in Sta. Rosa, Laguna, and the cheese, from Malagos in Davao. When the elements were delivered, participants were asked to chill the beer and the cheese before the session.

In nonvirtual sessions I’ve attended, there was no work for me to be done, just sit and wait to be served, but a virtual one requires the taster to prepare everything.

My cheese boards were at last utilized. The insulated bag housed the beer bottles because the ref was in the kitchen, not in the room where the Zoom session was held. We were told to open the beer just before the tasting so the next question was: Did I still have a bottle opener? Found it, almost rusted but still usable.

So when the Zoom session started, the cheeses were out of the plastic packs, arranged on the board with labels to indicate which cheese went with what beer. The Tasting Club also sent very good rustic bread. You can order from The Fresh Deli (f-tasteoffrance.com/collections/the-fresh-deli) to complete the experience.

On hand to talk about their products were Olive Puentespina, cheesemaker of Malagos Cheese, and Ian Wright, brewmaster of Crazy Carabao. Both spoke briefly about their own histories.

Wright has been in the business since 1982, but his early work was creating beer out of rice in China, and now he has moved on to a craft beer he says he can be proud of. Puentespina started in 2005, when production was just three liters a day, to a pre-COVID (new coronavirus disease) production of 60,000 liters a day.

Both explained the elements of their products and the fermentation process these undergo. Beer is brewed from malted barley, hops, yeast and water. Cheese has just three elements, according to Puentespina—milk, starter and salt. Out of those simple ingredients, Crazy Carabao produces five of the beers we were tasting that day. Malagos Cheese has 27 varieties.

For every pair tasting, I had to stand up to open the beer bottle and slice the cheese, sometimes place it on the sliced bread. Your computer camera doesn’t follow you, so you disappear from the scene every now and then.

Anmari cheese was paired with Craft Pilsner. Anmari is made with fresh cow’s milk and aged for six months, soft and buttery tasting. Pilsner is a style of pale lager, lager being a type of beer made from “bottom fermenting yeast at low temperature.” This was my favorite pairing, very light beer with creamy cheese.

Craft Wheat Beer has spices, particularly clove, and was paired with the Feta Tricolore because the cheese has fresh pepper flakes and fresh rosemary. It may take a trained taster to detect the clove (tastes like cavity filling), but it was easier to taste the rosemary and pepper flakes of the crumbly feta.

Golden Ale is what Crazy Carabao calls its pale ale. It is top fermenting, in contrast to lager, which is bottom fermenting, and its malt is roasted and is bitter. The cheese paired with this was Ingrid’s Rosemary, made from cow’s milk, in the style of gouda, infused with fresh rosemary and named after Puentespina’s daughter, who she says has trained to be a cheesemaker.

Queso Rustico is patterned after a young gouda, made from fresh cow’s milk and aged for three months or more but paired with Craft Pale Ale, described as a bold beer that is best taken with barbecued food.

Craft India Pale Ale is more bitter and made in the style of beer with strong hops, and whose name comes from its history of being exported to India for the East India Company. It was partnered with the Borracho (Spanish for drunkard) cheese made from goat’s milk and washed with dark beer for three months.

It was, as The Tasting Club intended, a lesson on the products (history, manufacturing process), but fun as well, because what better way to know a product than by tasting, smelling, seeing it right there? And you have the suppliers with you to answer your questions.

Charuel said The Tasting Club has had several tastings since the lockdown, such as cognac, champagne and sparkling wine, gin, French and Australian wines for beginners, cheese and French wine pairing.

This October, the tasting will be French wine and cheese, iconic wines and Indian cuisine, The art of Italian aperitivo, French wine and French dishes. In November, it’s Irish and Scotch whiskies. Information is available on the Facebook page of The Tasting Club Manila.