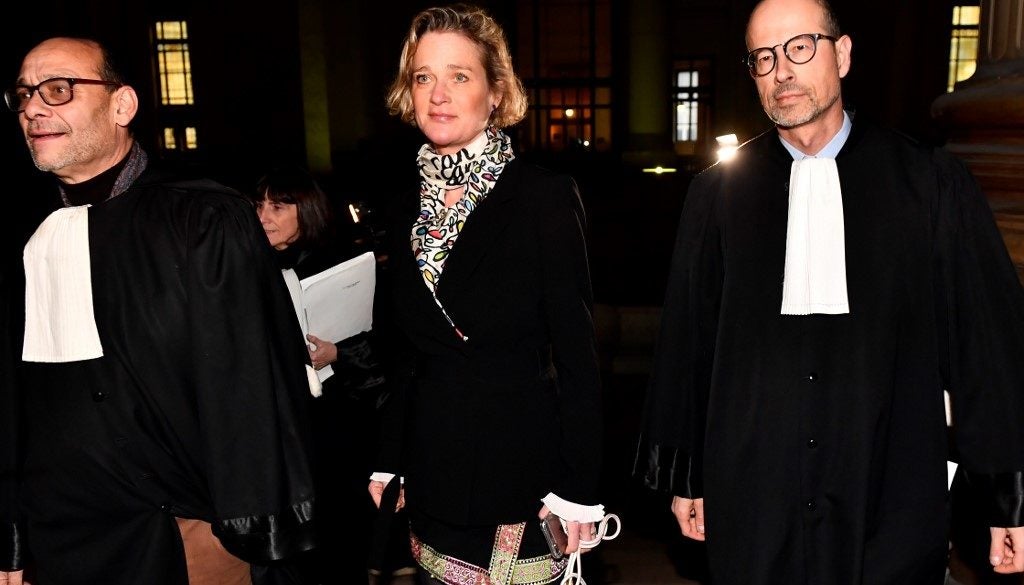 Belgian artist Delphine Boel, who claims King Albert II of Belgium is her biological father, arrives with her lawyers Marc Uyttendaele (L) and lawyer Yves-Henri Leleu prior to a hearing at the Cassation Court, on December 13, 2019 in Brussels, following the demand of King Albert II to contest an arrest of Brussels appeal court which established that Jacques Boel is not the father of Delphine Boel and which asks for King Albert II to take a DNA test. (Photo by DIRK WAEM / BELGA / AFP) / Belgium OUT

A Belgian artist has won a seven-year legal battle to be confirmed as a princess and the official daughter of former king Albert II, her lawyer said Thursday.

“The court affirms that King Albert II is her father,” the lawyer said, a claim confirmed by a judicial source.

“She will henceforth bear the patronym of Saxe-Cobourg. Her other requests that she be treated on the same footing as her brothers and sister were also granted,” he said.

Albert II, King of the Belgians, reigned between 1993 and 2013 before abdicating in favour of his legitimate son Philippe, the country’s current monarch.

Boel, a sculptor, had been reported to be Albert’s illegitimate daughter since the 1990s — or as she once put it his “dirty laundry” — but it was only last year that a court obliged him to submit a DNA sample.

“She is delighted with this court decision, which puts an end to a lengthy procedure that was particularly painful for her and her family,” the lawyer said.

“A judicial victory will never replace a father’s love, but it does offer a sense of justice, which is further strengthened by the fact that many more children who have gone through similar ordeals may be able to find the strength to face them.”

The lawyer said that Boel would address the media next week, when she had gathered her strength.

Albert, now 86, acknowledged in January that he was Boel’s father after a DNA test came back positive, ending a paternity battle that had dragged on for seven years.

But the court case continued, as she sought recognition as “Her Royal Highness Delphine de Saxe-Cobourg”.

The judicial source told AFP that her children will now become known as prince and princess of Belgium.

In August, she gave an interview with AFP at a retrospective of her work in the upmarket Belgian seaside resort of Knokke.

After living in London from the age of eight with her mother Baroness Sybille de Selys Longchamps, Boel considers herself “Anglo-Belgian” and speaks English with almost no trace of an accent.

She turned to art at an early age as “a good soothing medicine” and graduated from the prestigious Chelsea School of Art in 1991.

Her new exhibition drew on the pain of her long court battle, which began after a failed attempt at reconciliation with her royal father.

Boel told AFP that Albert’s belated decision to recognise her changed her life and allowed her to be taken seriously by those who had doubted her claim.

The former king’s change of heart came only after a court ordered the DNA test and levied a fine of 5,000 euros ($5,800) a day for each day he refused.

In 1999 a journalist revealed the existence of the then-king’s secret daughter, born from his affair of nearly 20 years with de Selys Longchamps.

But Albert continued to deny his paternity — even though he had been in contact with her when she was a child.

Despite her experiences, Boel remains a committed monarchist and found accusations to the contrary deeply painful.

“I was treated constantly as a sort of anti-royalist who was trying to demolish such institution and so on,” she said. “And I really suffered of that because it’s not true. I am royalist.”