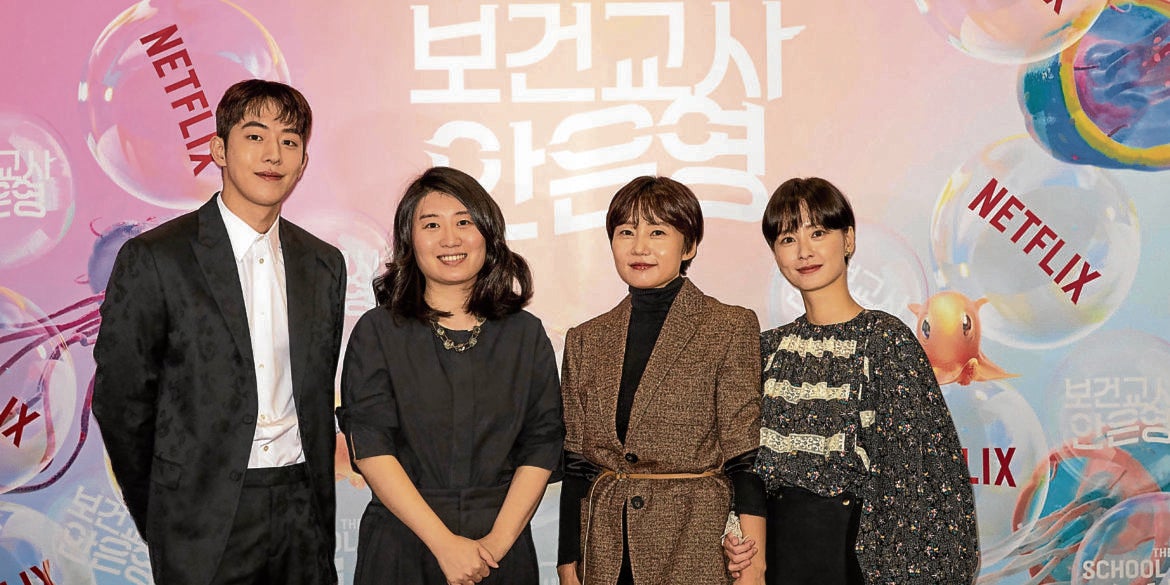 Chung Se-rang and her inspiration for ‘The School Nurse Files’

It is the responsibility of the adults to protect students from the unseen monsters that threaten them. This is the premise of Chung Se-rang’s “The School Nurse Files.” The Netflix Original series is based on the book with the same title that Chung wrote.

The heroine of the story is Ahn Eun-young, a school nurse who can see jellies. Some of these jellies are good and some of them are bad. And the inspiration for this character is Chung’s best friend who is a nurse.

Since Chung majored in education in college, she has a lot of friends who are now teachers. “School is a space that everyone is familiar with, and I respect teachers and nurses as professionals who contribute to a healthy society. I wanted to create something cute and fun to express my respect for these professionals. I love adding slight, cheeky fantastical twists to a universal experience.”

There’s nothing more fantastical than colorful jellies floating above the school building and hanging out on the walls. She said that these creatures were inspired by ectoplasm that was popular among spiritualists in 19th-century Europe.

Chung said that it’s been a huge opportunity for her that Netflix readily offered to collaborate with her in doing the series. She knows that it’s rare for new writers to have the opportunity to tell their story not only to the Korean audiences, but to audiences around the world.

“I’m happy to see companies like Netflix providing more opportunities for Asian creators to express their voices. I was so excited I almost couldn’t believe it was happening. I first shared the news with my spouse, who is always very supportive of my work,” she said.

She may be a new name in the K-drama world but she is a rock star in the literary world. She has her own loyal fans who love the fantasy she creates. Fantasy is the genre she has chosen because she said it allows her to write with metaphors of great scale without restriction.

“For example, the jellies are not just cute monsters, but they represent different human desires—the desire to be loved, the desire to have more and the desire to win—and when these desires go haywire and get distorted, they trigger a chain of events. Fantasy allows you to visualize it. I thought, if we could see the manifestations of desire, we could probably see both the beautiful and ugly sides of the world,” she said.

Eun-young sees these dual worlds more clearly than anyone. Chung said that it must feel isolating to fight when no one recognizes her effort and everyone misunderstands her.

“There are people like Eun-young in real life—heroes in our daily lives who are taken for granted and not given enough credit. Fantasy is a very powerful tool that mirrors our world,” she said.

Who would you say is your biggest literary influence?

Ursula K. Le Guin is my favorite writer and the biggest literary influence.

Do you see yourself writing more drama series after this? Or do you have more novels that will be adapted into a drama soon?

Some of my other novels will be made into films, but I’m not personally involved in the process of making the films. Given the opportunity, I’d love to continue to work on more series—they are interesting in a way that a novel isn’t.

I don’t want to stop myself from watching all the professionals of different fields bringing their expertise and abilities into making films or series. Seeing great possibilities spark makes me want to write better.

How did you choose the parts of the novel that you would include in the six-episode series?

Stories that are interesting as text, but are difficult to bring to screen were left out. For instance, parts that would require animals to act were excluded due to its practical challenges.

Certain episodes in the novel were excluded either because they were too short or too long. Parts of the novel that were selected and included in the series focus more on Eun-young’s emotional journey, her sense of responsibility and her connection with the students.

How was it collaborating with director Lee Kyoung-mi, the actors and everyone in the production to give life to your characters?

I can control 100 percent of the writing process for a novel, making a series requires collaboration of about 200 people. As a writer, you need to make a compromise on having full control on the story. That being said, having an endless flow of ideas that enrich the story was such a stimulating experience for me.

I would get questions on what kind of clothes Eun-young would wear, what In-pyo’s room would look like, and how big the basement of the school would be—the exchange of hundreds of questions and discussions and the outcome of that process is something that I would’ve never achieved on my own.

I enjoyed the excerpt from the “The School Nurse Files” available online. I want to know if Baek Hye-min is going to make an appearance this season? Or are you saving her for a possible Season 2?

Baek Hye-min will be the loveliest character of this season. Hye-min has a sensitive and kind heart that Eun-young wants to protect. I can’t go into any more detail because I don’t want to spoil the story. Personally, Hye-min’s story is one of my favorites, and you will not be disappointed.

How did you find Jung Yu-mi and Nam Joo-hyuk’s portrayal of your characters?

The two actors had amazing chemistry and it amplified the charm of the story. I cannot imagine Eun-young being portrayed by anyone else but Jung Yu-mi. I could see the facial expressions of Eun-young days after watching the series.

It’s the expression of someone who is kind but honest without exaggeration of her emotions; tired, but determined to keep fighting for what is right. Nam Joo-hyuk added a lot more depth to In-pyo and created a multidimensional character. Watching In-pyo, portrayed by Joo-hyuk, makes me want to learn more about his untold stories.