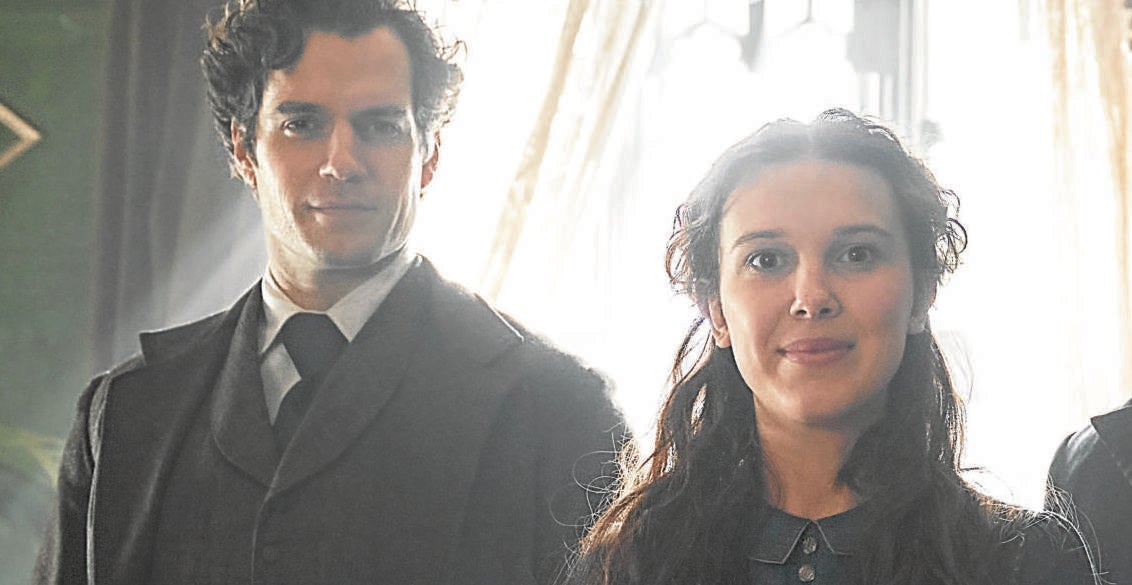 Henry Cavill: ‘I am a fan of Millie Bobby Brown’

Henry Cavill has played some really interesting characters—from Superman to Geralt of Rivia in “The Witcher.” Rumors are persistent that he’s set to play James Bond—and he’s expressed a deep interest in the role—after Daniel Craig turns in his 007 badge. But before that, he had another memorable figure to play: Sherlock Holmes in the Netflix film “Enola Holmes.” In the movie, Cavill plays older brother to the titular character—Millie Bobby Brown’s Enola. He said to us on Zoom, “It was an enormous honor to both play Sherlock and to work with Millie Bobby Brown.”

The film has been a hit, topping Netflix charts all over the world. We spoke to Cavill about playing detective, working with director Harry Bradbeer and having Brown and Sam Claflin as his onscreen siblings.

You’re a big star. What made you agree to a supporting role?

I am a fan of Millie Bobby Brown, I think she’s extraordinary. I have watched her stuff. The opportunity to play in a movie supporting her character, especially with such a good script and with such a fantastic cast as well as a director like Harry Bradbeer, it was a no brainer for me, really. It was a very easy decision to make. I jumped at the opportunity because there’s a really important message in this movie as well as it being a feel-good movie. I’ve played a lot of heavier more serious characters over the years, and it’s nice to play a character with some with some lightness, a character who is reflective of the other aspects of my personality as well which we don’t often get to see very much on film. But most importantly, because I get to support a character and actor like Millie Bobby Brown, playing Enola. That for me is a lot of fun because she’s really really good.

You have Sam Claflin playing your brother and you have Brown playing your sister. What kind of preparation did you do? Did you guys hang out before filming?

We didn’t spend a lot of time hanging out outside of filming. I think we kind of fell into place quite naturally it was a very easy transition. Sam and Millie are such good actors that when we were even doing readings or doing rehearsals together, it was very very obvious to us how to play these characters. For me and Enola, there was the emotional connection. For me and Sam, it was the connection of having been brothers that have grown up together that respect each other for our extraordinary differences, but there’s an underlying love there between the two. It all happened very naturally. I’m from a family of four brothers anyway and so for me, interacting with siblings of different types comes very very naturally. It was a lot of fun to work with both of them.

Yes, Millie is a lot like having a sister, she is a lot of fun. We had a lot of laughs together. I rolled my eyes a lot of times. The makeup trailer was was always a good laugh because she’d be talking about—I better be careful about how much I share about what’s said in the makeup trailer, that’s our sacred place of secrets. But she would often talk about reality TV. Reality TV is something she is very very well versed in, but I would often switch off when she was talking and she’d keep on just talking at me until she realized that I wasn’t listening anymore. She also tried to get me do a lot of social media, videos, whether it be dances, or anything like that, and I, of course, gave her a good strong no with that one. It was a lot like having a younger sister. Working with Millie has been such a fantastic experience, aside from the fact that she is enormous fun and very charismatic, she is extremely talented as well. And she has done so well in this role. She’s such a good actor. And she’s also an incredible producer. She is someone who is truly going to make an impact on this industry, and it has been an absolute pleasure working with her. She has a very very bright future ahead of her. And I’m excited to see where it goes.

Was Sherlock Holmes a role that you’ve always wanted to play? Can you talk about how you prepared to play him? We do see a little more tenderness in this Sherlock.

Sherlock Holmes wasn’t necessarily something which is on my radar to play because he’s been played so well by so many actors over the years. The difference of this character, the way that he is more in touch with his emotions I think is an important part of his story because he’s a supporting character to Enola’s character. They have so many similarities. In a little bit of backstory that we worked out, they were probably raised in a very similar way but Sherlock was forced down the path of society. He remains eccentric and the very interesting man that he is. He knows that Enola doesn’t have those same opportunities that she has if she’s forced down the traditional path. She won’t be able to be the incredible woman that she is. That has to connect to Sherlock’s emotional side and it’s very important that that supporting character can be there for Enola’s character so there’s an anchor there. There’s a family anchor to allow her to to blossom under her own accord and within her own rights to become the incredible woman that she is.

What was it like stepping into Sherlock’s shoes? How did you prepare for the role?

It was a great honor to step into his shoes and play a character like Sherlock. It was mostly about spending time with Harry Bradbeer. I actually had such a wonderful experience working with Harry. We were discussing who the character was in the script . . . We wanted to make sure that the character was true to who the character is while remaining useful and doing the job that she was required in this story. As a supporting character to Enola Holmes and as a character that required that emotional connection, it was important for both myself and Harry to delve into who I am as a person, emotionally, and really reach in and apply that to Sherlock Holmes. Harry focused a lot on me as a human being. He tried to ask me questions about the past, about my childhood, about my hopes and my dreams and those were the keys he turned during performances. And that was something which I enjoyed enormously, that collaborative process and we could actually mold a character and tell the story in the way that we wanted to do it best.

If Sherlock and Enola were in today’s world, what issues would they be fighting for?

I think equality is something which we are all still fighting for. It’s something which which needs to be normalized, absolutely. So it would probably be very much along the same lines. I think together they’d be a strong force for normalizing equality.

What’s the most important message of the film for you?

The most important message of the film is about equality and I enjoyed enormously being a part of that message.