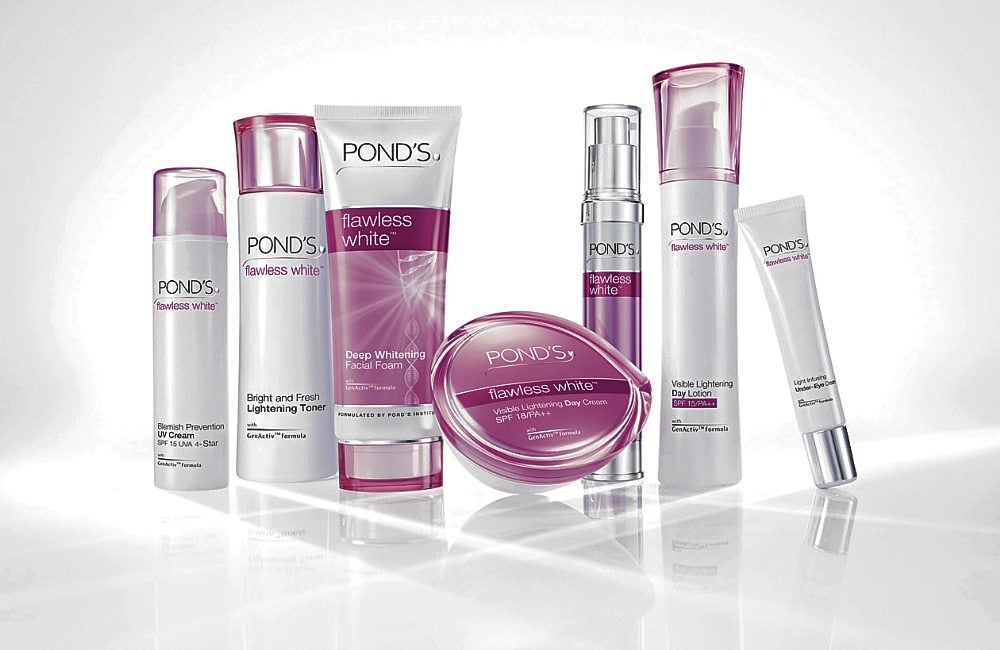 Getting real about whitening

No wonder beauty companies continue to feed this obsession, their R&D departments relentless in their research for more effective, safer, quicker and, as some now claim, more natural ways to lighten skin.

In October last year, Pond’s brought select Asian media to New York City for the launch of its reformulated top-selling skin-whitening range called Flawless White, which has just hit stores here, as well as Age Miracle, the reformulated anti-aging range (See Inquirer Lifestyle, Feb. 3). Flawless White is available only in Asia where the demand for skin whitening is massive.

Pond’s claim is that Flawless White has improved on its previous formulation and now targets a specific gene to inhibit melanin production. The result is a product of 10 years of research that required the thorough analysis of 20,000 genes to find that one gene that affects natural dispersion of melanin in the skin.

The new technology, Pond’s says, adapts to each individual skin’s unique melanin level. Meaning, with Flawless White’s so-called GenActiv formula, pigmentation, sunspots and melasma will even out to their natural clear and bright, pre-sun- and environment-damaged state.

The promise is remarkably realistic. If you were born Pinoy-brown, for instance, don’t expect to become Michael Jackson-white. But you will be a spotless, more radiant version of yourself.

The reformulation, according to Pond’s, is in response to the market’s demand for individualization of products geared for each unique skin type. A person’s skin color is determined by his/her genetics and race, and is affected by his/her health and hormones, as well as the sun and the environment. According to Pond’s, consumers’ wants have changed in the last few years: They don’t want unnatural white skin; they want an even skin tone.

The new GenActiv formulation has two main components: 12-HSA or 12-hydroxystearic acid, which renews skin cells, and niacinamide, a form of vitamin B3 naturally found in some foods like salmon and tuna, and is used in cosmetics as  skin-lightening ingredient. It’s proven to improve hyperpigmentation. Pond’s claims to have pioneered the use of vitamin B3 with its comprehensive lightening regime first developed in 1992.

At Pond’s Institute in New York, the company spends 250 million euros annually for research and development. Pond’s uses a machine called SIAscope to show the degree of melanin index in each individual subject, as well as Visia, a complexion analysis system that tracks the changes of the skin, including the rate of UV damage and discolorations.

“Almost 85 percent of Filipinos desire whiter skin,” notes Jacqe Yuengtian, Pond’s senior brand manager. “Pond’s is the far leader in whitening in the Philippines, due to our very targeted products that give Filipinos what they want in brighter, fairer skin. We have conquered that space of whitening and continue to grow even further.”

Flawless White with New GenActiv’s range includes a facial foam, a toner, both day and night creams, a serum, an eye cream, a day lotion, a blemish-prevention UV cream, a two-way foundation, and a lightening mask. The range comes in new, darker pink packaging. The products now bear the tag “with New GenActiv formula” on the label.

“Locally, White Beauty contributes bigger for Pond’s as it is more widely available and more affordable,” says Yuengtian. “But Flawless White is a strong player as well because it lives up to the Pond’s standard of effectiveness and relevance to the market.”

Unlike White Beauty, Flawless White doesn’t have a high-profile celebrity peddling its range in its TVC.

“We believe in making the product the hero, especially for our masstige line,” says Yuengtian. “These products boast the best technology available, and we want to communicate this fact more to our consumers. We believe as well that it is our job to educate our consumers, so we want to dedicate our efforts in explaining the benefits of our masstige range. We thrive on the notion that our products offer beauty technology that consumers deserve to know about and that they deserve to experience.”