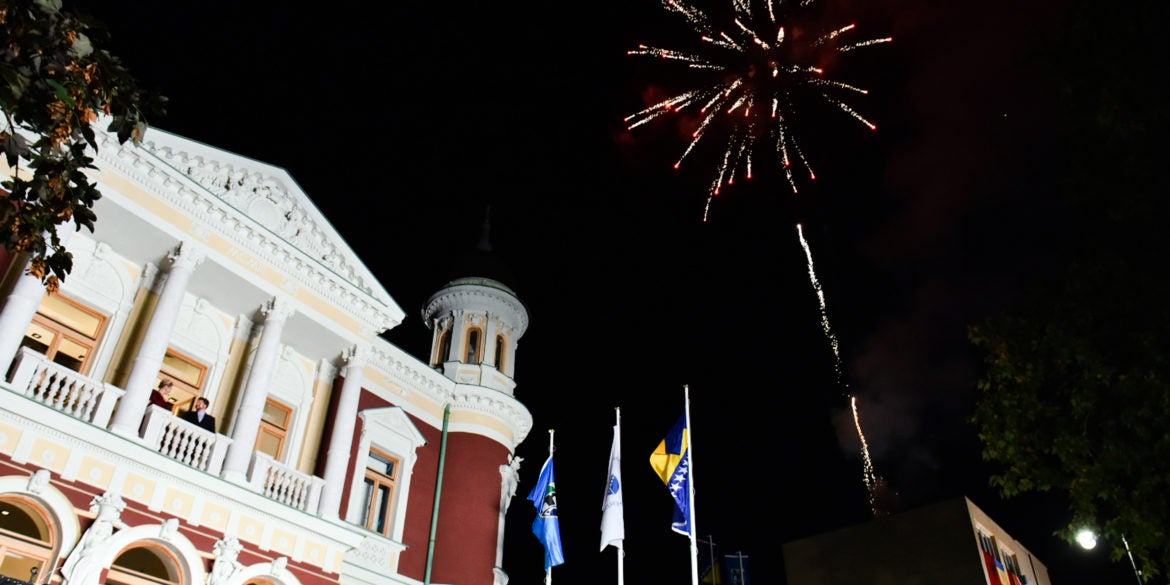 This photograph taken on October 8, 2020 shows fireworks during the reopeing ceremony of the Sarajevo's museum of XIV Winter Olympic Games, in Sarajevo. - The museum was originally opened in 1984. It was bombed and burnt in 1992, at the beginning of the siege of Sarajevo, during 1992-95 war in Bosnia. (Photo by STR / AFP)

Almost three decades after being destroyed in a bombing campaign during the war in Bosnia, a museum that honours the memory of the 1984 Sarajevo Winter Olympic Games has been rebuilt and reopened.

The jewel of local architecture, built as a luxury villa in the early 20th century, was among the first city symbols to be demolished by Serb forces during the siege of Sarajevo from 1992 to 1995.

The Winter Olympics were organized a few years before the bloody break-up of Yugoslavia, a conflict that claimed some 100,000 lives in Bosnia and 11,000 in Sarajevo itself.

The reopening ceremony was attended Thursday by Prince Albert II of Monaco and hosted by Sarajevo Mayor Abdulah Skaka, who pledged to continue patching up the city’s architecture that still shows war scars, a quarter of a century since the clashes.

“Our intention to rebuild all the destroyed symbols of this city is slowly becoming reality. This evening is the proof,” Skaka declared.

Bosnian artist Edin Numankadic, founder of the museum, managed to preserve a large part of the collections during the conflict by hiding them in the basement of the Zetra Olympic ice rink.

In an interview with AFP in 2019, Numankadic said that the museum perpetuated “a rare happy memory” in the city’s tragic history.

The exhibition contains memorabilia like photos, souvenirs, and some athletes’ equipment, but also works that some artists have devoted to the Sarajevo Winter Olympics, including those of Andy Warhol, Henry Moore, Michelangelo Pistoletto, or James Rosenquist.