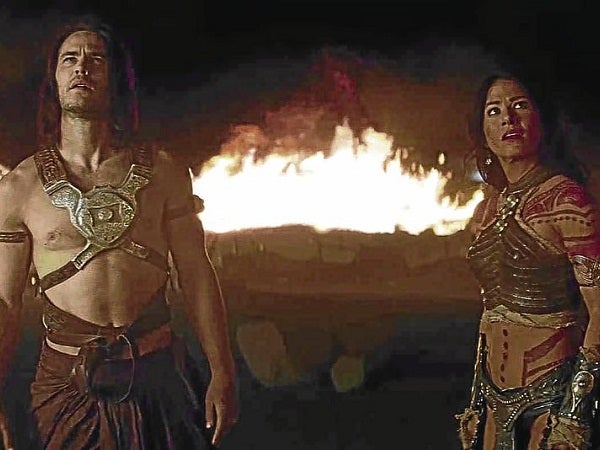 As far as science fiction pedigree is concerned, it’s hard to beat “John Carter.” For one thing, the source material—serialized magazine stories from venerable author Edgar Rice Burroughs—is exactly 100 years old, and Burroughs did happen to create one other character in 1912, a loincloth-clad jungle king named Tarzan.

But “John Carter” is actually more significant from a pop culture perspective, as Burroughs inspired practically all of the swashbuckling sci-fi adventures that came after it, coming before pulp novels and comic books.

There are parts of “John Carter” which seem derivative—the chained battle in the arena, the dogfight with the alien spacecraft—but then you must remember, “John Carter” is the original version, not the copy. “John Carter” predates everything from Alex Raymond’s “Flash Gordon” (created 1934), George Lucas’ “Star Wars Episode IV: A New Hope” (1977), and James Cameron’s “Avatar” (2009). All three have their roots in Burroughs’ prototype spaceman-with-a-sword saga.

That’s also why some of the otherworldly scenes (with a spooky Utah sitting in for Mars) may seem familiar to you, as would aspects of the central plot. The titular John Carter is a brooding former Confederate captain (hunky Taylor Kitsch from TV’s “Friday Night Lights) prospecting a legendary cave of gold when he is accidentally transported to the planet of Mars, which is called Barsoom by its natives, whom Carter meets soon after.

He is plunged into an ongoing planetary war being waged by a ruthless warlord named Sab Than (sneering Dominic West) under the control of a mysterious wizard of sorts called Matai Shang (ever maleficent Mark Strong).

Somehow, Carter leads the fight to save Barsoom and to save the defiant princess Dejah Thoris (“True Blood’s” Lynn Collins) from marrying Sab Than. Along the way, Carter becomes part of an alien tribe called the Tharks, even as he seeks to find a way to get back to Earth.

If that prototypical sci-fi plot doesn’t win you over, then you need to learn about the second part of “John Carter’s” considerable pedigree: director Andrew Stanton. Stanton just happens to be one of Pixar’s bright guys and the Academy Award-winning director of “Finding Nemo” and “Wall·E.”

Clearly, the Pixar people know how to make the screen come alive. This explains why the visual effects are top-notch and the action scenes vibrate with purpose and poise. There’s a scene-stealing dog-like creature called a Calot that’s probably the cutest CGI critter you’ve seen, with Pixar DNA written all over it.

There’s also a lot of fighting. You may have seen big fights like this before (hero versus monsters, hero versus villain and so on) but Stanton stages all of it with old-fashioned thrills harnessed with new-fangled technology. The business-like script, by Stanton, Mark Andrews, and Michael Chabon, is surprisingly faithful for the most part, to the original material, the novel “A Princess of Mars,” in particular including the clever bits about Carter’s life on Earth at different parts of the film.

“John Carter” starts off careful, hits the ground running once the action shifts to Barsoom for the film’s longish middle portion, but then truly gets fine narrative momentum as it races confidently toward its rousing, romantic ending.

You don’t have to know “John Carter’s” legacy to enjoy its otherworldly delight. You don’t have to read any of the original Burroughs novels, but doing so will give you a different kind of Carter adventure. On its own, it’s a solid, efficient blade-and-blaster movie. But factor in the talents of director Andrew Stanton alloyed with the historic importance of the first fictional interplanetary savior, and “John Carter” rockets into celebratory cinematic flight.