Quarantine University is back in session | Inquirer Lifestyle ❮ ❯ 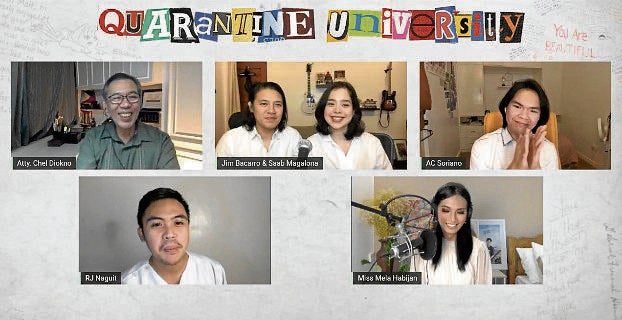 Quarantine University is back in session

Just like in the previous session held on International Youth Day in August, the class started with Diokno taking attendance and then quizzing his students in a graded recitation.

He asked Habijan, “What were you in school? Were you the teacher’s pet? Were you the class president? The most likely to succeed?”

“I am everything you said,” Habijan said. “Growing up, I always inculcated within me that I had to fight for my space. Being an LGBTQ+, I’ve always been reminded that the label ‘gay’ or ‘trans’ or being LGBTQ+ will always be seen as a weakness. Therefore, my defense mechanism was to be good at school. I had to perform well, I had to make sure I was on top of everything and ’yun ’yung nakasanayan ko.

“I always had to be my best, so before they see me as this gay little kid or now as a trans person, they’ll see me as someone who’s intelligent and smart. But now, things have reversed. I want them to see me as a trans woman and that being trans allows me to be intelligent, to be smart and someone who can transform.”

“Grabe, class ba ’to or Miss Universe?” a viewer commented.“You’re beautiful inside and out,” wrote another.

During the group discussion, they talked about their low points during the pandemic.

“When the lockdown was announced, the first thing I asked myself was, ‘Paano ako mabubuhay?’ Dahil lahat ng kabuhayan ko na-cancel unti-

unti,” Habijan, an actor, mentor and events host, said. “What dawned on me was, it was the end of my career.” She spent time reflecting, crying and asking God what to do next. She found comfort in watching the Thai boys love (BL) show “2gether: The Series.”

Bacarro, who runs the Filipino shirt brand Linya-Linya with friends Ali Sangalang and Panch Alvarez, said, “I think the most difficult part was, we had to close a lot of stores in the malls. I had to tell people I cared about that they wouldn’t be working for a few months. I had no answers. It was the first time I was put in that position. And I had to do it via Zoom pa.”

Magalona added, “You tried so hard to provide what you could as a business pero it just wasn’t working anymore and it was very tough.”

Working from home was a big switch for Bacarro. “I have a certain workflow . . . It was about adjusting and reminding myself that I have other people here . . . ”Magalona, a breastfeeding mom to two babies, has been working from home for a while. “I had feelings pero alam mong kawawa naman ’yung iba so parang ayaw mong magreklamo, nahihiya ako. I’m also freaking out but I know a lot of people have it so much worse. Nandun ’yung guilt na magreklamo or even vent about it . . . are my feelings valid?” she said.

“You have to remind yourself that there are things that are outside your control,” said Naguit. “Somehow may magagawa ka for them but we can’t solve everyone’s problems. Meron tayong limits as people. And we need to recognize that we have our own ways of coping so we cannot compare ’yung coping natin with another person.”

One day at a time

Soriano is working with a telco on creating a program that donates a modem to a student with no connectivity for every modem purchased by a customer. “’Yun ’yung mga pinagkakaabalahan ko. I still choose to look at the brighter side.”

Talk turned to the toxicity of social media and keeping updated about what’s happening in the country.

Habijan said, “Some people have stopped reading the news. I disagree with that because you still have to be in the know. Although guilty din ako . . . because [with] the government’s response to COVID-19, huminto na talaga ako, nawalan na talaga ako ng pag-asa pagdating sa pagreresponde sa sitwasyong ito.”Magalona said, “Nakaka-

depress talaga ’yung mga nangyayari . . . Being a mother of two boys, I have to be happy around them but on the other hand, I don’t want to give up on the country. Kaya natin ’to.”

Naguit said, “You need to take a step back kung overwhelming na siya.” And change your notification settings, he said. “We have control over these things. Sometimes we just need to be mindful of how we use social media.”

Habijan said, “We have to choose our battles . . . There are people who do not deserve our attention, but at the same time, there are people we have to respond to because it’s an opportunity to educate.”

They talked about support systems, coping mechanisms and the importance of harnessing the power of social media for positive things.

“It’s up to us how to use it. ’Yung social media in the time of pandemic became my means to fulfill dreams,” Habijan said, referring to her joining—and winning—virtual pageant Miss Trans Global and starting her online show “3Some,” where she’s interviewed guests like KC Concepcion and Vice President Leni Robredo.

“I think we should learn from that, that the pandemic shouldn’t stop us from achieving our dreams,” said Diokno.

In their podcast “Wake Up with Jim and Saab,” Bacarro said, “We always promote gratitude.” Their audience is young, he said, and they’ve been encouraging them to register to vote.

“Not everyone is as fortunate as us to get decent information, to know what the country needs . . . yes, manage the information you receive, it doesn’t mean you should withdraw lang,” Bacarro added. “You should still actively seek the information necessary to actually contribute. Kasi kung lahat tayo, we submit to the fact na, ‘Okay, lahat ng people running this country engot,’ bakit tayo rin magiging engot? You have to seek to be educated pa rin. Just look for the mediums that won’t compromise your mental health.”