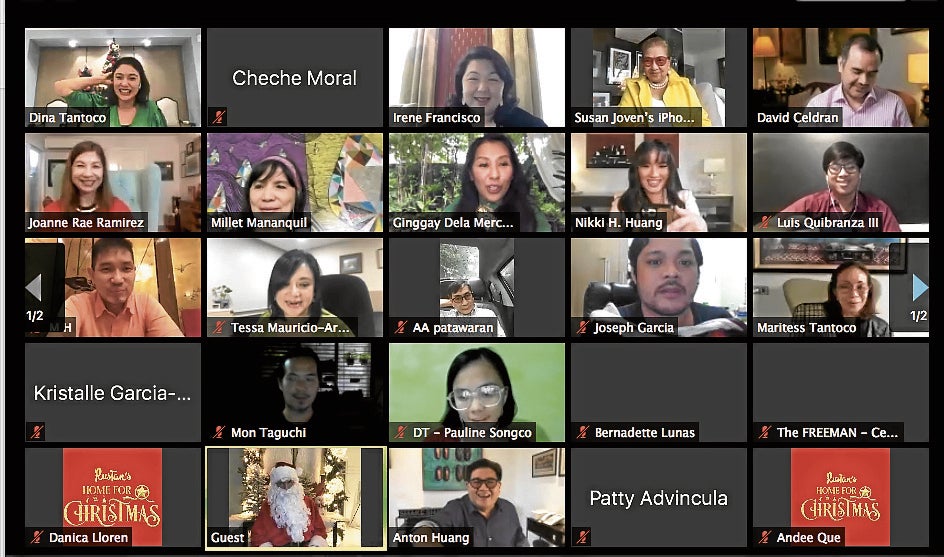 ‘Home for Christmas’ has deeper meaning this year

The pandemic ‘taught me the value of our version of front-liners, their sense of malasakit for the company,’ says Anton Huang of Rustan Group of Companies

If being home with family is what Christmas means, in a way it has been Christmas for the past seven months for many.

That has certainly been what it’s like for retail leader Anton T. Huang.

For Huang, who typically spends half of each month abroad owing to his job as president of SSI Group, being home with his wife and daughters since the lockdown has been a surprisingly welcome experience. Frequent travel has been part of Huang’s work life for the past 20-odd years.

“Home for Christmas,” incidentally, is Rustan’s holiday theme for 2020.

“What this pandemic taught us is to value our family and loved ones,” Huang said at the annual Rustan’s Christmas media get-together, done this year via Zoom on Thursday. And by family, he means not just his immediate and extended, close-knit Tantoco relatives, but the Rustan’s family that includes their many long-time employees.

“It taught me the value of our version of front-liners, especially in the business that we’re in,” Huang said. “Despite the difficulties, we tried to reopen as early as possible. For Shake Shack, we were operational by April 15.” (The burger chain will open its third restaurant in the Philippines in Greenbelt on Oct. 27.)

They were able to do this only because many of their workers “sacrificed living away from their families in order to work,” Huang said. “There was no public transport. Many had to walk certain distances to get to our shuttles, and we couldn’t provide them with shuttles right away. That makes you appreciate that sense of malasakit to the company, which is a very Filipino trait.”

He added, “When you see that, it gives you hope that we will come out of this, hopefully sooner than later.”

At the onset, Huang acknowledged their difficulties in the Rustan Group of Companies in dealing with the “unique challenges” of the pandemic. “As the economy starts to get back up on its feet, you can be confident that Rustan’s has not become in any way complacent,” he said.

Aside from putting in place the most stringent in-store safety measures, Rustan’s launched new services that make it easy and safe to shop from home.

Rustan’s chair and CEO Nedy Tantoco spearheaded the development of the Personal Shopper On Call program, which is done via phone or online, and where merchandise is delivered to the customer’s doorstep.

The same service called The Specialist is offered with the SSI brands. In June, sales from service accounted for 15-17 percent of their total sales; it had grown to 28 percent by August.

These services will go on beyond the holidays, Huang said.

Rustans.com, which launched in 2019, now services nationwide customers and has since grown “1,000 percent from January to September,” and makes up 10 percent of the total sales of the department store. Huang describes the development as “very exciting,” noting that in the United States, e-commerce sales in 2020 are now at the level of their projections for 2030.

On Oct. 24, customers nationwide can start calling one hotline number (0917-1111952) for all their personal shopping needs. One’s Christmas list can be completed through this service. Personal shoppers can also preselect items for customers who still wish to come to the store, by appointment.

There are online gift catalogs for everything, from home to fashion to kids’ toys.

Huang said that their strongest categories since the pandemic have been home products, skincare and toys. The luxury brands have been doing well with bags, accessories and casual shoes and sneakers.

“Luxury has always been most resilient. Now it’s driven by the upper market segment, who have been staying home and shopping at home,” he said. “We’re no longer looking at 2019. All I care about is, what did we do last week and the week before?”

While a meet-and-greet with Santa can’t be done in person this year, Rustan’s is offering the Santa-On-Call program, which links kids with the jolly fat man in a red suit and his elves via Zoom for storytelling sessions and one-on-one photo ops. Kids can also write to Santa at [email protected] for their Christmas wish list (three winners will be chosen).

On Nov. 7 and Nov. 8, Rustan’s will commence with its Christmas and frequent shopper program promos, and zero-percent installment offerings.

“I’ve been stuck home for seven months and it’s been nice,” said Huang, whose brother Michael, Rustan’s head of store development, and aunt Maritess Enriquez, Rustan’s board member, were also in the Zoom call. His older daughter Nikki, who cohosted the Zoom event, is home from Boston, where she attends university.

“All that traveling, I’m not missing that,” Huang said.