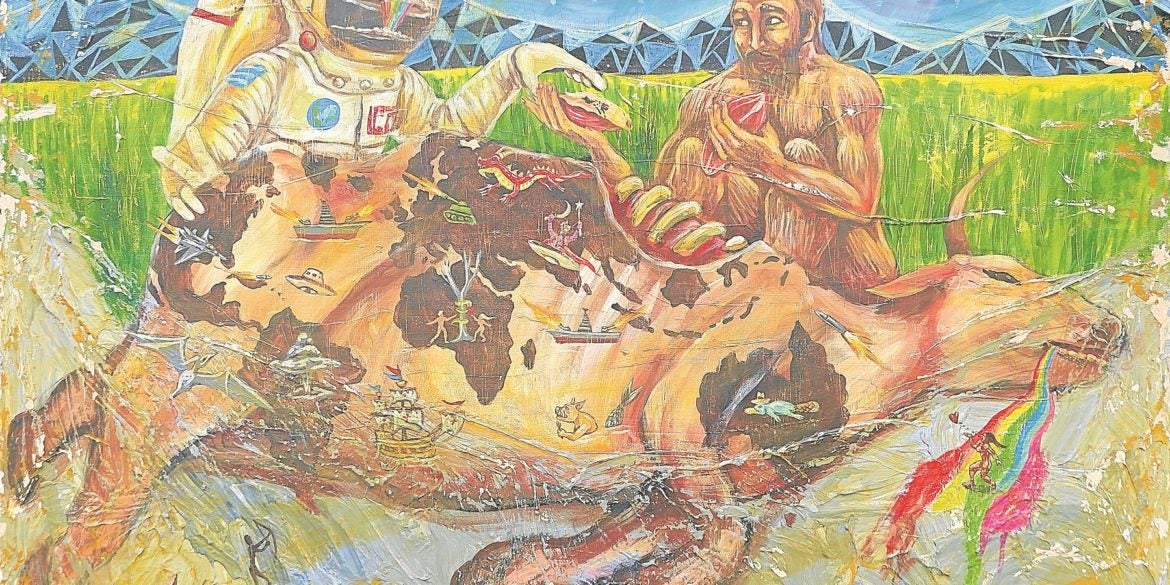 Apocalyptic ‘Zoo’: Reynaldo ‘Pogs’ Samson on the loose at Pinto

“And the beast which I saw was like unto a leopard, and his feet were as the feet of a bear, and his mouth as the mouth of a lion: and the dragon gave him his power, and his seat, and great authority.”

There is something of the hallucinatory quality of the Book of Revelations in the bestiary that Antipolo-based painter Reynaldo “Pogs” Samson has gathered together in “Zoo,” his current exhibit of paintings at the newly reopened Pinto Art Museum.

But there’s also a strong undercurrent of whimsy that suggests that, though the end may be nigh, it won’t be all fire and brimstone. There’s also a kind of bemusement behind the pessimism. It’s the end of the world as we know it, but we’ll feel fine, it seems to suggest.

“Pogs Samson is one of the few artists who has established an iconography of his own,” writes Carlomar Arcangel Daoana in the exhibition notes.

“A language that is as technical and tactical as a novel. From one painting to another, from one exhibition to another, it’s a sustained performance of epical reach, that what is being essayed is not just a particular vision in a point of time but an encompassing view of the universe itself: from spinning galaxies to anthropomorphized sun and moon, to churning oceans and scorched landscapes.

“As exemplified by this new exhibition, ‘Zoo,’ the center of this universe is man, not in the hierarchical sense, but in the narrative sense as he shapes and reshapes the world into his own image. The man in Samson’s work is not the benevolent figure who is the custodian of creation, but the cruel and destructive kind, who savages fellow living things, pillages the earth, and pollutes everything in his path. The future for this man is not utopia but annihilation, the Anthropocene Age folding in upon itself as blemish on geological time.”

The works in “Zoo” are of a piece with those in “Ingkisisyon,” the artist’s exhibit at Eskinita Art Gallery in Makati which had the misfortune of coinciding with the start of the enhanced community quarantine (ECQ) in March.

In fact, the enforced confinement of the first few months might have fueled the paintings that make up “Zoo.”

“Like everyone else, I have been spending most of my time at home,” Samson told Lifestyle in an email interview from his Antipolo studio.

“I was not able to get any work done during the first few months of ECQ because of lack of art materials. At that time I just focused on video games (particularly Monster Hunter World), checking my Facebook news feed and watching random videos on YouTube. I stumbled on YouTube videos discussing prehistoric animals, and also prehistoric man and this heavily influenced some of my latest works. I still included images that serve as allegories on how the people in power (politicians, religious leaders) abuse said power.”

Considering the allegorical nature of much of his work, the use of religious iconography and elements of Philippine religious art of the colonial period, we ask him if there was an underlying spirituality to what he put on canvas.

“I was quite religious when I was young, before I hit 14,” he says.

“I regularly attended church sermons. At 14, I remember how I started questioning my own beliefs, I just stopped worrying about ‘faith,’ and became agnostic during my mid 20s.”

“I grew up seeing them creating art every day, and thus I was influenced,” he says. Other influences include “Hieronymus Bosch, Manny Garibay and imagery from movies, video games, card games, board games, comic books, etc.”

“‘Zoo’ was inspired by a deck archetype with the same name from popular card games such as Magic the Gathering,” he adds. The idea was to fill your deck with creatures (thus ‘Zoo’), and attack with them. What I did was fill my canvas with images of different creatures, and inject allegories tackling the abuse of power being committed by those who have said power with the primary subject either representing society or the world we live in, the corrupt politicians represented by the Barong-clad Pigman, a priest who either has a long nose a la Pinocchio, or is a wolf man, etc.”

“The animals that Samson gathers together in this apocalyptic zoo portend of the signs of things to come,” continues Daoana in his exhibition notes. “In one work, as reflected by the glass eyes of the pandemic mask worn by a red frog, the sign is one of a foregone conclusion: the swelling of mushroom clouds. One can’t help but see Samson’s paintings as prophetic tablets from which we are gleaning the end of the world in real time. He holds a mirror to reality but tilted to expose its underbelly.”