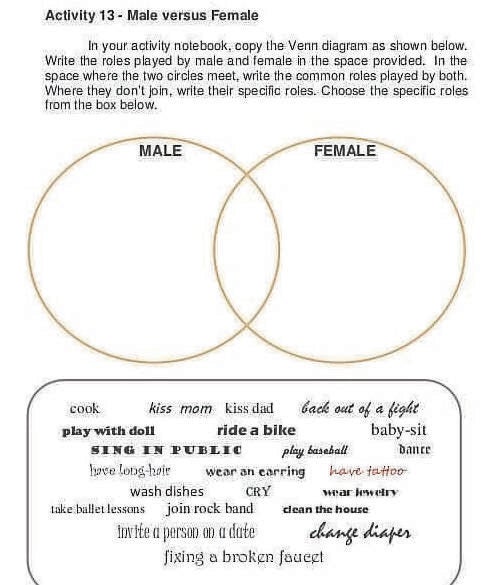 Why are we asking Grade 8 students to write wedding vows?

“Takte gender roles pa rin 2020 na???” a Facebook friend posted in all caps, punctuating the question with a vomit emoji.

He was referring to yet another questionable Department of Education module that was making rounds online. In this activity, called “Male versus Female,” students are asked to fill a Venn diagram to determine if the activity listed is a male or female role.

Surely this is a joke right? Or a trick question where the students are expected to write all these things in the overlapping section of the diagram?

Luckily, the person who shared this page included the link to the full module. I decided to look at it, hoping that I’d find confirmation that it was a trick question.

The items listed were giving birth, making a living, fixing the broken faucet (the person who wrote this module has a faucet fixation), doing household chores and helping the children with their homework.

Activity 7, according to the module, will “enrich your vocabulary.” It asks students to create a table and write words associated with the words “masculine” and “feminine.” As an example, under masculine, the module gave the word “breadwinner.” Under feminine, the module supplied the word “babysitter.”

On page 39, the module tries to redeem itself by saying, “Your sex role should not limit your interests. You can be masculine and feminine and participate in events and professions that are usually chosen by persons of only one sex. Healthful sexuality is being comfortable and contented (sic) with your attitudes about your sex role.”

But on the very next page, there’s this exercise (we have corrected the spelling errors, by the way) which asks students to “Visualize and Learn!”: “You will be given five minutes to close your eyes and imagine a scenario in the past where kings and queens once lived. Imagine you are the king (if male) or queen (if female). The queen is captured and needs rescuing from her captors. The king assumes the conventional role of a brave king who rescues his queen, while the queen takes on the role of a meek and mild queen who needs looking after.”

I wish I can say these were the only problematic sections of this module. But I found more.

This, by the way, is the Health Learning Module for Grade 8 students of Negros Oriental.

Activity 19 is called “My Abstinence Bag.” It reads: “Abstinence is the best decision one can make in safeguarding sexual health. In this activity, list five items that you value most in life and will help you say no to unhealthful practices. Explain how this item can encourage you to make the right decisions.”

This is the example the module gave: “Putting a family picture in my abstinence bag can remind me of how I value my loved ones and how I would like to make them proud of my achievements.”

(You know what I’d put in my abstinence bag? This module. It makes me never want to procreate so my imaginary offspring won’t have to do these activities.)

More wisdom on abstinence from this module: “Raquel does not engage in sexual behavior because she would like to protect her reputation and that of her family. She believes that risky sexual behaviors will only bring her shame and guilt.”

And then there’s this (unedited) question the module asks students: “How can drinking alcohol leads to STI HIV?”

There’s a section of the module devoted to discussing love and infatuation. It defines infatuation as “the state of being completely carried away by unreasoning desire” and love as “a decision to commit oneself to another and to work through conflicts instead of giving up. A deeper understanding or care.”

The symptoms of infatuation according to the module? “Urgency, intensity, sexual desire, anxiety, high risk choices, reckless abandonment of what was once valued.” The symptoms of love? “Faithfulness, confidence. Willingness to make sacrifices for another. Working at settling differences. Able to compromise so that either both win or at least give the other person’s opinion a chance.”

According to this module, infatuation feels like “all consuming euphoria similar to recreational drug use, stupidity, can risk everything for the next hit of adrenaline” and calls it a “reckless commitment to satisfy one’s all consuming lust.”

‘You are truly in love’

The module also includes a section on courtship, dating and marriage. One activity asks students to share their personal experiences of courtship (and asks them to close their eyes for a minute to “reminisce the past”)—but aren’t 8th grade students just 13 or 14 years old?

The module praises the students for participating in this activity with the words: “Excellent job! You are truly in love. Keep it up for the next activity.”

Page 88 asks students, “If you are engaged, which do you prefer, long engagement or short engagement period? Explain in front of the class.”

And after that activity is this note: “Wow! That is very nice. You have high standard expectations.”

On the same page, students are asked to draw their ideal man or woman and write the characteristics they expect from them.

The module continues, “It is the most significant event that may happen to your life.”

And I thought it was ridiculous when we were asked to plan our weddings in our Marriage and The Family class in college—but at least we were already 18 or 19 then. (I submitted just one sentence: “I don’t plan on getting married.”)

There’s a section devoted to pregnancy—including a lot of warnings against teenage pregnancy. “The young mother is more likely to be angered and disillusioned by a baby’s demands and may become an abusive parent,” one section reads.

Students are asked to reflect on “Alisa’s Dilemma”: “Alisa is a 14-year-old girl who grew up in the province. When she was in grade eight, her aunt took her to Pasay to be a house helper in the morning and to study at night in the nearby public school. While studying, she fell in love with one of her classmates who is older than her. They got married and lived in the squatter area of Baclaran. She got pregnant but because her husband’s salary is below minimum wage she did not go to any clinic or hospital for prenatal check-up. She saved money for the coming of the baby. She gave birth in a public lying-in clinic to an underweight child with several health complications. Alisa and her husband got so scared about their child’s condition.”

Grade 8 students are also asked to create a one-week meal plan—breakfast, lunch, dinner and two snacks—for a pregnant woman and to justify it. They are also asked to cut out pictures of food and paste them onto a paper plate. “Remember that these foods are what a woman should be eating during pregnancy,” the module reads.

This module says that in bigger families, “nutritional intake per member tends to be smaller, malnutrition tends to be higher,” children are “disadvantaged in terms of physical development,” “prone to infection and parasite infestations,” there’s “stiff competition among siblings” and family members “exercise self-deprivation and sacrifice.”

Another section of the module is devoted to alcohol consumption. It includes a lengthy questionnaire asking students about their experience with alcohol. “Do you drink alcoholic beverages on a regular basis? Have you ever had more than one glass or bottle of alcoholic drink in a two-hour period? Do you get irritated or annoyed when people talk about your drinking? Do you drink until the supply is gone?”

On a couple of pages, there are teenage testimonials about alcohol. One reads: “I am worried that our country is slowly becoming an ‘alcohol capital.’ If this continues, tourism in the country will get weak. Our economy will go down and we will not be able to eradicate poverty.”

(On the contrary, one of the things my foreign friends love about visiting the Philippines is how cheap the beer is.)

The module teaches eight graders how to say no, which, I agree, is a very important skill to learn. “You and your friend are walking home from school. You stumble upon an unopened can of beer on the road. Your friend tells you to get the beer and drink it at the side. What should you do?”

In another exercise called “Bottles of Hope,” students are asked to redesign bottles. “Are they alcohol bottles? Convert and design them into something else. Make them alcohol-free.”

But the truth is, after going through this module, I really really feel like having a beer.