‘Kenkoy’ and proud of it: Feting the Father of Pinoy ‘Komiks’ | Inquirer Lifestyle ❮ ❯ 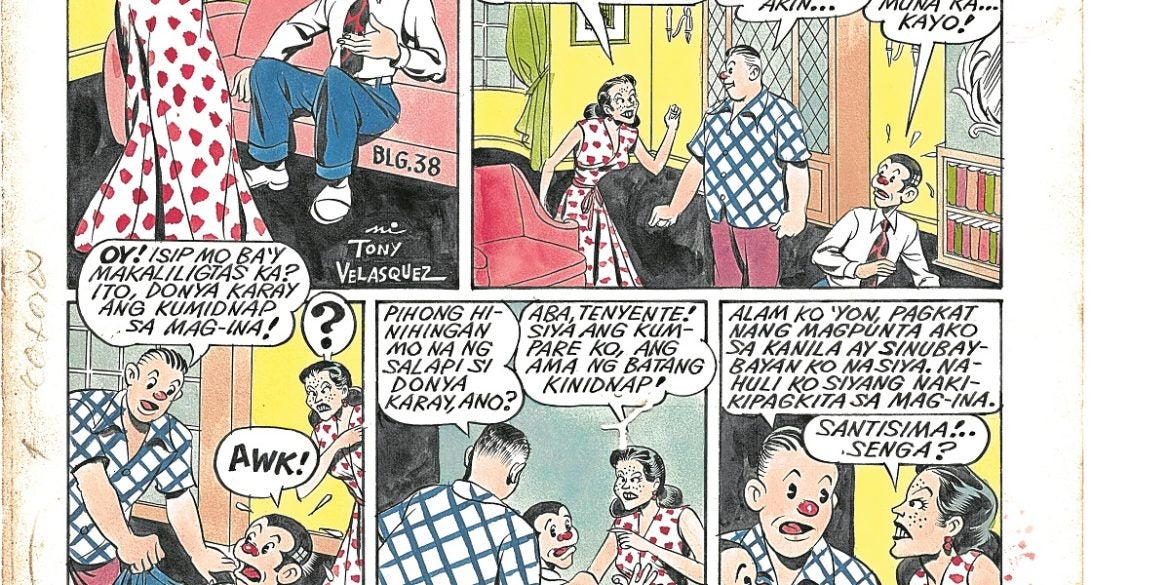 ‘Kenkoy’ and proud of it: Feting the Father of Pinoy ‘Komiks’

What exactly does it mean to be “kenkoy?”

“Kenkoy usually refers to someone who is boisterously hilarious, funny or amusing,” said Dr. Jose Wendell Capili of the University of the Philippines Diliman, a Pinoy pop culture researcher.

The term entered everyday lingo thanks to Francisco “Kenkoy” Harabas, a fictional funnyman created by comics artist Tony Velasquez in the 1920s, when the country was still under American colonial rule.

But more than just a character in outlandish attire and sporting a slick, combed-back hairdo, Kenkoy was a bright fun house mirror lifted up to the collective face of Filipino society, reflecting the silliness of parroting Western ways, exemplified by his so-called carabao English: “Weitaminit!” “Bay-gali!” “Huat is dat?”

Paying homage to Velasquez as the acclaimed “Father of the Filipino Komiks,’’ the late historian and fellow comics creator Gerry Alanguilan said in 2011: “Even though Jose Rizal himself was the very first comics creator in the Philippines, Tony Velasquez was the man who popularized the medium not only [by creating] Kenkoy … but by pioneering the comic book format through Ace Publications.’’

Velasquez served as editor in chief of an entire line of comic books—Pilipino Komiks, Tagalog Klasiks, Hiwaga, Espesyal and Kenkoy Komiks. “Steering that ship for many decades, [he] quite literally created the Philippine ‘komiks’ industry,” Alanguilan said. 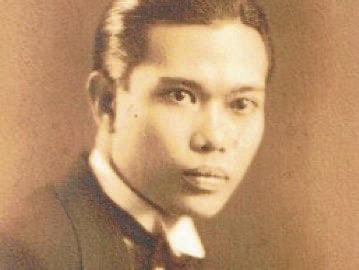 ‘Life of the party’

Antonio Santos Velasquez was born in Paco, Manila, on Oct. 29, 1910. His youngest daughter, Remedios “Remy” Velasquez Francisco, 78, is now a retired nurse living in Florida in the United States.

She recalled: “Dad was a kind, gentle, understanding and honest man but he was actually very extroverted, always the life of the party. He always had funny stories and millions of jokes to tell.”

Velasquez would go on to work for Ramon Roces, producing advertisements for the latter’s magazines, including the extremely popular Liwayway.

Kenkoy, the character who would define Velasquez’s career, first appeared in Liwayway on Jan. 11, 1929—just a few months before the debut of global Disney icon Mickey Mouse—in a strip called “Mga Kabalbalan ni Kenkoy,” with Romulado Ramos writing the dialogue.

The character turned out to be so popular that it soon appeared in all but one of the Roces magazines.

It also proved to be most resilient during World War II, when the Japanese occupying forces tried to hijack it. “My dad was pressured to use Kenkoy for war propaganda. He refused, and the President at the time (Jose P. Laurel) convinced my dad to use Kenkoy to promote health programs instead,’’ Francisco recalled.

After Liberation, Kenkoy continued to appear in strips until 1989. Velasquez, despite his failing eyesight, continued to have editorial input during that period.

“Of course, my dad felt proud of his creation,” Francisco said. “It was his favorite character and he enjoyed Kenkoy’s popularity because for him Kenkoy was a manifestation of his own comical personality … My dad felt elated that his character was being used by his fellow Filipinos as a word which refers to a funny person.”

Velasquez also got to see Kenkoy and his love interest Rosing inspire two movies and a Ryan Cayabyab musical. The Inquirer even reprinted Kenkoy strips in 2003.

“In many ways, Velasquez was a trailblazer,’’ Capili said. “Back then, most Filipinos had very limited options for entertainment—movies, television, radio and komiks. Of these, komiks was something that anyone can afford to rent or buy, or keep for posterity.’’

“He created opportunities for writers, illustrators and workers. He opened up a variety of characters, narratives and genres—from comedy to romance, to horror, and so on. Keenly sensitive about social and political issues, he also wanted to articulate relevant [topics] but he utilized Kenkoy to [make them] more accessible.”

For his contributions to the field of visual arts, Velasquez received from the Cultural Center of the Philippines the Gawad CCP para sa Sining in 1993. He died four years later at the age of 86. 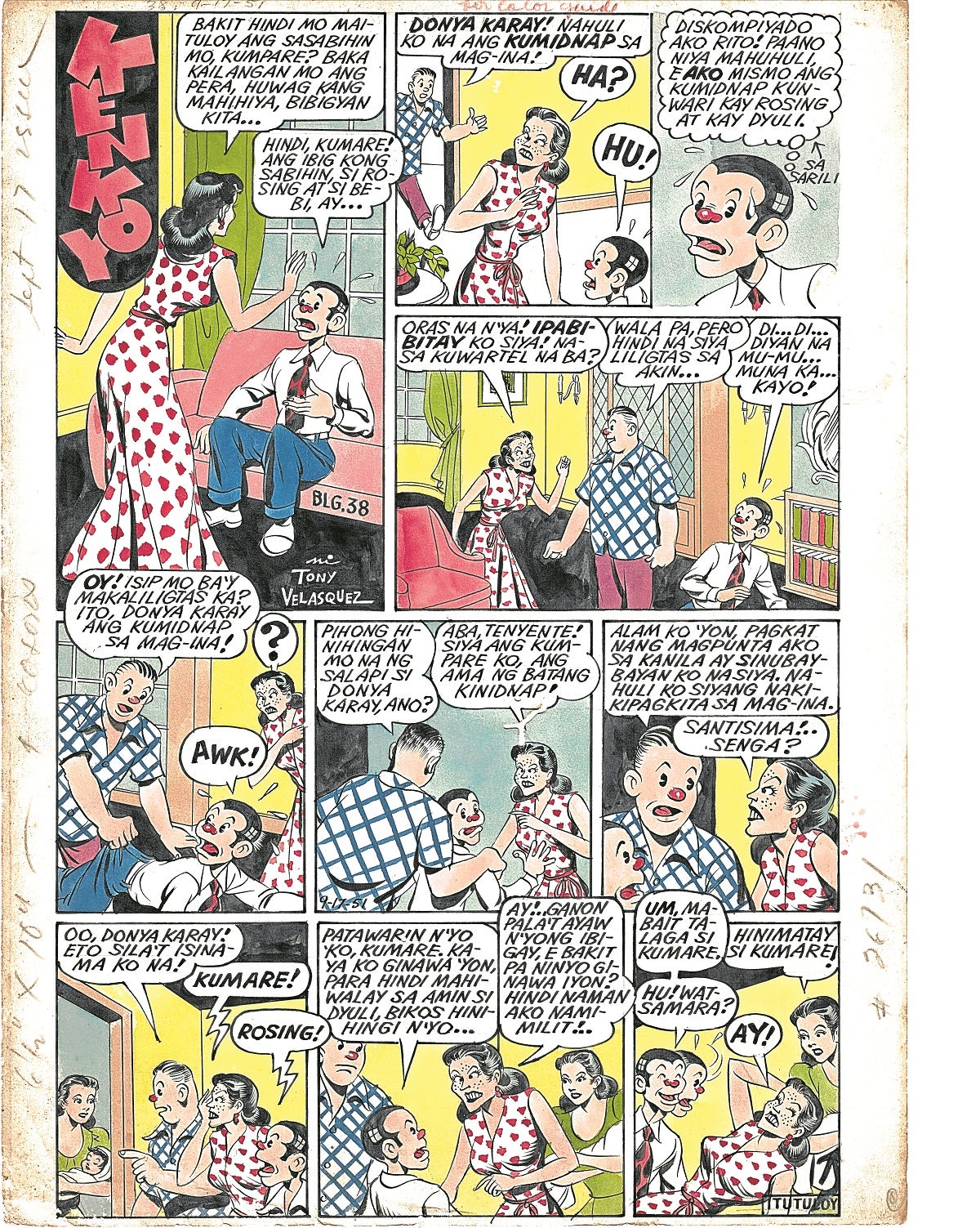 In charge of the commemoration of Velasquez’s 110th birth anniversary on Thursday is Damian “Ian” Velasquez III, his grandnephew and the grandson of Velasquez’s younger brother Damian “Dami” Velasquez who is also a komikero himself. Ian is the administrator of Kenkoy and Tony’s other characters, such as Ponyang Halobaybay.

The pioneering online komiks platform Penlab is the latest to celebrate Velazquez’s legacy.

“Tita Remy and I will appear in komiks podcasts [on Penlab] as well as an internet radio show as part of the celebration. PTV 4 is also doing a feature … in their ‘Pamana’ segment. There’s a biography that I’m working on—the life and art of Tony Velasquez, similar to the Coching books, which will be published by National University,” Ian told the Inquirer.

“My personal wish on his 110th birthday is that he be proclaimed national artist,” Francisco said of her father.

While the local komiks industry of the scale reached during the Velasquez era is all but gone, a new generation of creators is enjoying popularity in the Philippines and abroad.

“The growth of new artists nowadays would be the happiest wish of my dad, and he would probably be shouting ‘more power’ to the komiks world,” she said.

“Kikomachine Komix” creator Manix Abrera agreed: “Yes, I think I can say that I am also a spiritual successor, because we were able to continue, hopefully, what was started before. Even if the styles and techniques are now varied, the essence is still there.”

For Capili, “Millennials can probably learn a great deal from Kenkoy. Perhaps, just like Kenkoy, they can poke fun at their mistakes, take things lightly despite stressful situations.”

“Laughing at our problems or being funny [even] in times of negativity, I think it shows how we Filipinos will always be Kenkoy,’’ Ian said.