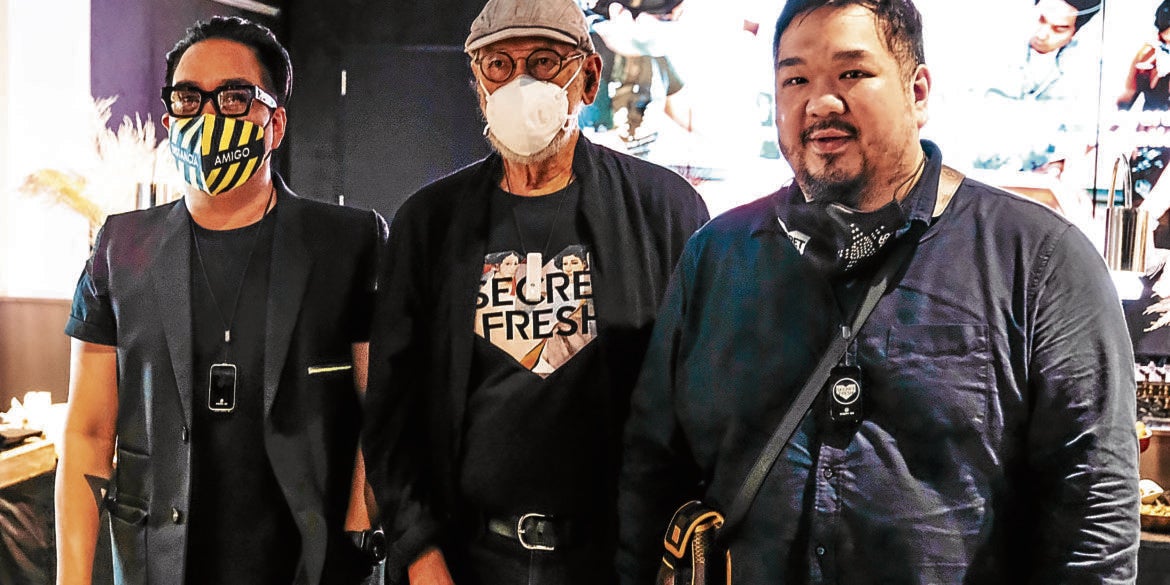 Two of the country’s preeminent visual artists, representing different generations, spark a lively conversation of the past, present and future

“Do it right up to the hilt, as it were, and you and your partner will generate a third party, some thoroughly Other, and often one capable of things neither you nor the very reasonable gentleman seated opposite would even begin to consider. ‘Who,’ asks one of those disembodied voices in Mr. Burroughs’ multilevel scrapbooks, ‘is the Third who walks beside us?’”

Gibson was writing about the cult band Steely Dan, which is, or was, an artistic collaboration between Donald Fagen and the late Walter Becker. The Third that they conjured up, “mister Steely Dan himself,” writes Gibson, was an entity greater than the sum of its parts.

His words could apply as well to BenCab and Ronald Ventura, two of the country’s preeminent visual artists, who are currently exhibiting a number of collaborative artworks at Secret Fresh gallery on Ortigas Avenue, San Juan City.

An additional print of each design was made, which both artists overlaid with an additional hand-painted layer, making each print a unique original.

Out of their comfort zones

More importantly, the collaboration takes both artists out of their respective comfort zones, taking them to places they would not have explored otherwise.

The “Mr. Burroughs” referenced in Gibson’s quote is writer William Burroughs, author of “Naked Lunch,” who posited a Third Mind emerging when two separate authors subsume their egos in the service of the collaboration, “the complete fusion in a praxis of two subjectivities, two subjectivities that metamorphose into a third; it is from this collusion that a new author emerges, an absent third person, invisible and beyond grasp, decoding the silence.” (“The Third Mind,” likewise a collab with the poet Brion Gysin.)

In order to work, collaboration requires that each collaborator surrender some of their artistic control, and consequently some of their identity, in the service of the project—quite a leap from the idea of art as the product of the solitary creative genius, and not something many artists are willing to do.

Both BenCab and Ventura succeeded in doing this despite their respective high standing in the contemporary Philippine art totem pole: BenCab is of course a National Artist for the Visual Arts, while Ventura is burdened with being a bona fide “auction star,” one of the most sought-after contemporary Filipino artists by local and international collectors.

The fact that they did most of the work at the height of lockdown, separately, makes the collaboration even more remarkable.

As BenCab recalls, he would craft his images in his studio in Baguio City, then send them to Ventura in Manila, who would then digitally combine them with his own in a multilayered collage.

Months later, when quarantine restrictions were loosened, the two were finally able to work together, adding final touches by hand to each limited-edition digital print.

“It was more of a challenge to see how [Ventura] would react to my images and what he would do with them,” says BenCab when reached by phone.

“I’m 78, he’s only 47,” he adds. “Being much younger, he knows more technique, and his imagery is more current. As far as my subject matter is concerned, he’s aware of my fascination with Filipiniana, colonialism. He’s very much influenced by classic Baroque paintings, and he makes his own interpretation of them.”

What the two artists had in common was a strong predilection for drawing as the core of image-making. Both are avid and exceptional draftsmen, and their respective styles proved simpatico.

“More than a pairing of prominent names, this undertaking sparks a lively conversation about the past, present and the future, as well as the enduring challenges that Filipinos and humanity in general grapple with throughout history,” writes Ruel Caasi in the exhibition notes.

“BenCab and Ronald Ventura represent two different generations of artists, yet their careers share parallelisms in terms of prolific production, market presence and institutional recognition. Though both have expressed distinct artistic voices, their style, techniques, themes and subjects share some common grounds. In this exhibition, we observe how the forging of these analogous elements revisits the narratives woven and dialogues initiated by the artists in their respective practices, and at the same time generate new meanings as they resonate with concerns and issues of the present.”

“The featured pieces assemble some of the recurring icons and interventions that have defined the two artists’ most important body of works,” Caasi continues.

“For BenCab, we see again the familiar images of Filipino women clad in traditional clothing from his series influenced by turn of the 20th-century colonial photography… Ventura layers BenCab’s iconic imagery with his own oeuvre of figures and approaches to merging the past and the present, and explores their manifold continuities. Equally invested with the figurative image, Ventura’s skillful draftsmanship highlights drawing as the starting point which all other complex permutations of the image proceeds from—be it painting, sculpture or print.

“… This collection of works resulting from the fusion of two trailblazing visions in Philippine art describes a world in a state of flux, with images constantly layering and crowing—but one in which vestiges of the past persist to be entangled with the dissonance of the current times.”

Managing to rope two of contemporary Philippine art’s leading lights into collaborating on a single exhibit is something of a coup for Secret Fresh gallery and its jovial honcho, Bigboy Cheng. In fact, one has to wonder if anyone else could have managed it.

Secret Fresh is something of an outlier in the contemporary gallery scene, tracing its origins to Cheng’s original and continuing passions, which are collecting sneakers (he is said to have the largest hoard in the country) and limited-edition vinyl toys.

Over time, however, the gallery has added more established names to its roster, among them Elmer Borlongan and Plet Bolipata, Andres Barrioquinto, BenCab and now Ventura.

Today it’s a leading player in the current gallery scene, with one key difference: Contemporary art, in the Secret Fresh world-view, is merely the highest tier of collectible, several levels up from Kaws figurines and Doraemon dolls, but still part of the hierarchy.

Thus, the gallery’s attitude is refreshingly free of the chin-stroking high seriousness that plagues many of the more traditional galleries. Its management is largely unburdened by the baggage of received ideas regarding art history, art criticism and the rightful place of art in contemporary society.

The so-called commodification of art may be an issue for some galleries; for Secret Fresh it’s a business model.

There’s usually a party vibe accompanying Secret Fresh openings, with a DJ set or two, a generous buffet, a hip young audience and plenty of merch.

Merchandising, in fact, is central to Secret Fresh’s appeal: It has its own fabrication workshop for casting limited runs of sculptures and toys designed by the gallery’s roster of artists, and exhibits are frequently accompanied by limited runs of apparel and other collectors’ items.

Generating collectibles is a core business for the gallery, resulting in such periodic “drops” as the BenCab x Rega turntable, the Elmer Borlongan “speaker man” figurine, as well as hoodies, trucker caps, T-shirts, toys, etc. There’s a Secret Fresh collaboration sneaker with World Balance and a Secret Fresh lunch box. Swag that you don’t need but, somehow, want.

Collaborations are nothing new in the Secret Fresh universe, though these are mostly between designers and apparel or toy manufacturers.

Collaborations between established artists of equal caliber, however, are a much rarer breed.

In this regard, “BenCab x Ronald Ventura” is a landmark that one hopes will be followed by others.