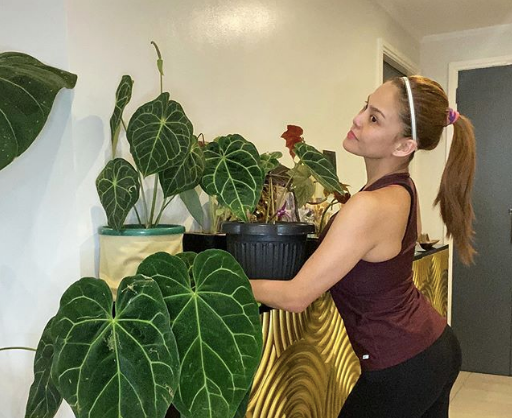 TV anchor and “plantita” Gretchen Fullido is well aware that root rot problems among plants can be caused by overwatering.

“I’ve had a number of friends [and] people who messaged me via DM to ask for SOS because their plant suffered root rot,” she said in her post.

Fullido admitted she also had some plants which suffered from root rot last month and a couple of months back because she overwatered them.

“Kasi naman, napaka-sipag ko magdilig ng plants, ayan tuloy,” she joked. (It is because I am so diligent in watering the plants, so this happened.)

Fullido realized her mistake as she made some observations: root rot is more possible to happen these days while the weather is cooler and the soil in the pot remains moist much longer. Root rot will then follow if one keeps on watering under these conditions, versus watering frequently in summer days when the soil dries up faster.

At best, she advised “plantitas” and “plantitos” to closely observe their own plants and see how they can prevent the roots from rotting.

“So, if you see anything different in your plant — like yellowing or brown spots on the leaves, the leaves are starting to droop, the plant doesn’t look happy or there’s just something not right when you look at your plant, maybe it’s best to inspect your plant and check if there are signs of possible rot on the roots,” she said, noting that early detection gives you a better chance in saving your plant if you remove the rot when it’s just starting.

Fullido believes that “when it comes to root rot, you need to act fast before it’s too late.”

“I’m not trying to discourage you,” she said. “In fact, I’m saying there is hope if you detect it and treat it early.”

Fullido also encouraged fans and followers to share tips and advice to each other via the comments section, to help everyone more effectively solve root rot. JB