You can learn guitar from Chino Singson of Itchyworms | Inquirer Lifestyle ❮ ❯ 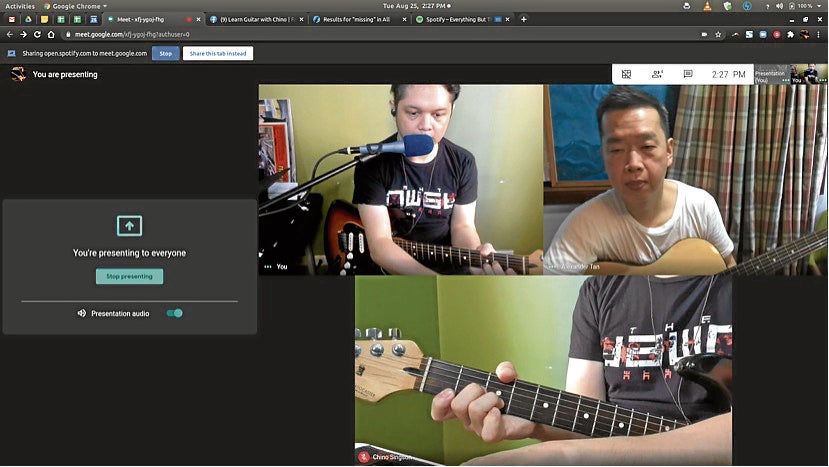 Chino, who teaches guitar players of all levels, holds his one-on-one classes viaZoom or GoogleMeet

You can learn guitar from Chino Singson of Itchyworms

He considered teaching before the pandemic but never had the time

As lead guitarist of the Itchyworms, one of the country’s most successful bands, Chino Singson enjoyed the often elusive gift of being able to make a living doing what he loved. But that was before the pandemic.

“Into the third month of quarantine, I was running low on cash, and there were almost no gigs in sight,” the dad of two said.

He decided to do something he thought of doing before the pandemic but never had the time: Teach people how to play the guitar. Chabeli, the niece of Jazz Nicolas, drummer of the Itchyworms, had already asked him for lessons in June. Maybe he could teach more people, he thought.

“A quick interest check on the socials made the prospect look promising. So I said, what have I got to lose? Jim Paredes’ creative motto came to mind: ‘Jump and a net might appear. If it doesn’t, I could grow wings!’”

Singson started playing the guitar at the age of 13, thanks to a dad who had musical instruments lying around the house. “He had a ‘combo’ in the ’60s so guitar was kind of his thing. I remember there was an accordion—too heavy and complicated—and a melodion—not very cool.”

And so the guitar it was. “I was primarily self-taught. I love the guitar because with relatively little skill, one can make music successfully.”

His dad taught him to play his first song, “Wild Thing” by The Troggs. “It was easy to learn because it only has three chords.”

Now a seasoned guitar player, Singson has been sharing his knowledge with guitar players of all levels, exploring both theory and technique with them.

He offers beginner, intermediate and advanced lessons, customizing his classes based on his student’s pace and skill. Lessons are held one-on-one over Zoom or Google Meet “for maximum benefit.” And one of the beauties of holding lessons over the internet is Singson can teach students no matter where they are in the world. 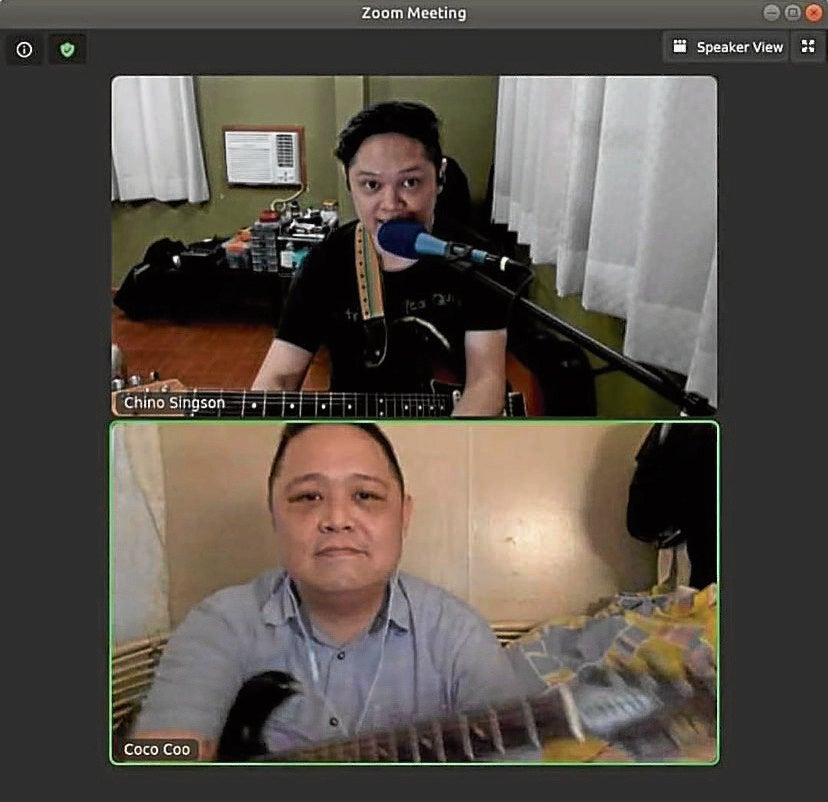 His goal is for his students to learn new techniques, improve dexterity, maximize their potential on the guitar and, of course, have fun.

Singson’s students have been mostly males age 25 to 45. But, he said, “I teach students of almost all ages. The youngest student I’ve taught is 9 years old. The oldest was, well, older than me.”

And how many sessions does it usually take for a person to learn? Singson said, “It varies from person to person, but I normally recommend my four-session package.”

There are challenges to teaching over the internet. Singson said, “A big challenge is describing finger positions. In a face-to-face lesson, a student could easily copy what I’m doing.”

But his lessons have been a success, with students raving about him as a teacher. Even longtime musicians like Gab Chee Kee of Parokya Ni Edgar have signed up for classes and wrote, “Learned about scales and variations of chords. I now have a better understanding of my instrument and look forward to our next class. Salamat, Prof. Chino.”

Another student is Paulo K. Tirol, a composer and lyricist who had studied at Berklee College of Music and New York University’s Tisch School of the Arts and had written the musicals “Called” and “On This Side of the World.” “He took lessons with me to get a guitarist’s point of view,” Singson said. “Sabi niya he learned more from our four lessons than from one sem of guitar at Berklee.”

Beginners have been singing Singson praises, too. Mark Gatela, a student from Sacramento, wrote, “I can definitely say it’s one of the best decisions I’ve made toward learning to play the guitar. He makes the task of learning become less intimidating. For a beginner, that’s a very big deal. You can’t get that from a YouTube video.”

Singson has also been learning from his students, he said in a letter to them. “I have learned more in these past months than in all my years of playing. I can only hope that I have taught you as much. Also, please know that by enrolling with me, you support my family as well.”

Singson usually holds classes on Mondays, Wednesdays, Fridays, Saturdays and Sundays but “I will phase out Sundays until the end of the year.” He teaches a maximum of five students a day for an hour each. “I schedule sessions once a week so that students have time to digest concepts and do homework.”

Singson has been juggling teaching and playing with the Itchyworms. The band has managed to continue to make music despite the lockdown. “Luckily we’ve had several paying gigs, which have been great. The ‘new normal’ for us is playing shows in our studio in front of a camera,” Singson said.

They’ve also released a quarantine album “Waiting for the End to Start” under Sony Music Philippines which you can now find on all digital platforms (lnk.to/IW-WFTETS).

“One good result was that we finally had the time to do a full-length album… The LDR (long-distance recording) workflow gave us more time to perfect everything. The flipside is we have not had a real gig with an audience since March, and we don’t know when that will happen again.”

Singson will be accepting new students until Nov. 8 and then, after teaching almost nonstop since late June, he plans to take a break in December.

His tips for aspiring guitarists? “Buy a guitar that fits your budget. Get a real tuner or a tuner app. Practice at least 30 minutes a day when time allows. And, most importantly, learn songs by ear. The internet is a nice resource, but the real way to learn music is by using your ears.”