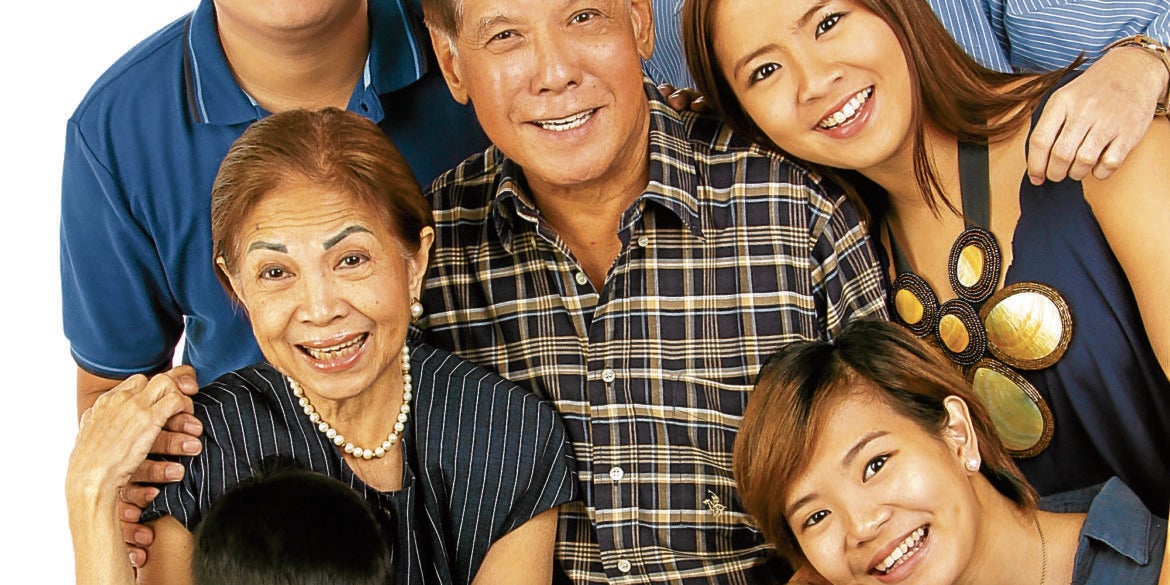 Lola Ludy with her husband, Lolo Germy, and their five “apo” in 2012. Author is rightmost, second row.

Barely 4’11”, she had spindly arms that were often weighed down with thick, solid gold bracelets, and any room she entered was too small for her

When most people think about their grandmothers, they are probably overcome with warm and fuzzy feelings. Snippets of family traditions, secret recipes, homemaking tips and a nurturing embrace rush through their heads.

That’s not exactly what happens to me.

Don’t get me wrong—the warmth and fuzziness are there. The source, however, is also decked out in diamonds, smelling of a heady mixture of pricey perfume, spray net and scotch.

My Lola Ludy was larger than life while I was growing up. I remember seeing a sepia-colored portrait of her in a frame when I was young, and thinking that she resembled Audrey Hepburn. She is of Filipino-Chinese descent. Barely 4’11”, she had spindly arms that were often weighed down with thick, solid gold bracelets, and any room she entered was too small for her.

She is really the only grandmother I ever knew, as my mom’s own mother passed on when I was just a toddler. Until I was well into my teens, my family lived with Lola Ludy and my grandfather. We lived first in a bungalow on a yet undeveloped and much quieter Commonwealth Avenue, and second, in a huge hilltop house in a posh subdivision in Quezon City.

I was the first grandchild. One day, while my parents were out, Lola Ludy cut my eyelashes without their permission. My father was piqued. There is an old wives’ tale that when you cut a baby’s lashes, they will grow back lush and thick, and therefore, more beautiful.

Years later, when my brothers and I would come home from school, Lola Ludy would come to spend some time with us.

She would saunter into our living area on the second floor of the big house, which was set up as a separate area for us, her son’s family. Then, in her floor-length house dress that was more suited to, perhaps, the shores of Southern France, a scotch glass of afternoon delight in hand, she would tuck her lips in and buss us on the cheeks in greeting, “Hi, bebe.” Then she would teach me how to ballroom dance, or regale my brothers with her piano playing. She had been quite good at it since her childhood.

Lola Ludy grew up in Malolos, Bulacan, in a landed clan that has had its entanglements with Philippine history. Her grandmother was one of the 20 women of Malolos who pushed for educational reforms and the opening of a school for women, and who received a letter of commendation from Dr. Jose Rizal for their efforts.

Even in Malolos, when she was young, Lola Ludy knew everyone. We were told that, as a child, she would go around all the sari-sari stores, picking what she wanted and charming all the tinderas into giving her credit. “Babayaran ka na lang ni Inang.” Inang was my great-grandmother. Of course, the bill came, and Inang would throw her arms up in frustration.

She was still the same by the time my siblings and I came around—even grander and more theatrical. She would host monthly mahjong parties on the terrace. We kids would weave in and out of the square mahjong tables, picking at the snacks and trying to keep track of the names of the elder guests. Sometimes their hair was black, other times gray.

I never went to Lola Ludy for comfort or advice, but she always went out of her way to lend us something, or take us somewhere, or find something that we needed or wanted, no matter what it was.

I was graduating from high school and attending my graduation ball. My mother had allowed me to have a dress made. On the night of the ball, my biggest concerns were about the time my date was picking me up, and whether we would get to sit with my friends.

Lola Ludy, however, was more concerned about my bare neck, and promptly led me to her dressing table on the night of the ball. She opened her jewelry box, and asked me to pick from one of her many treasures. I chose a simple, thick gold choker that was probably worth more than all my worldly 17-year-old possessions combined. My friends had probably thought it was a piece of costume jewelry from the Greenhills tiangge.

I arrived home from the party after midnight, and I figured that Lola would ask for the necklace back in the morning, as it was so late. But like an apparition, she appeared at the top of the stairs as I was heading to my room.

“How was your party?” she asked, looking like she was about to go to one herself, even though she was really going to bed. “Did you have fun?”

“It was good, Lola! Yeah I did!” I answered, still in the fancy, expensive designer dress.

“Good, good,” she said briskly, then stretched out her hand, in anticipation. “Give me the necklace na, bebe.” I handed it over. The gold glowed in the soft lamp light. The necklace was very heavy, and definitely not from the Greenhills tiangge.

She was flamboyant and glamorous, and witty and funny. She would say outrageous things, and they would offend no one. My husband, Stevie, has a favorite story of Lola Ludy, from when we were still in our 20s, and not yet married.

It was a special occasion, and the entire clan had gone to a mall one evening to dine out. Lola was older by now, grayer, less postura, foggier in thought.

We were all lined up single file to get on an escalator to go up two or three stories. The opposite downward escalator was inching steadily toward us, bearing a portly woman with ringlets exploding from her head. Her lipstick was garish, and she was squeezed into what looked like the spoils of an African game hunt. Leopard spots hugged at her curves, head to toe, and held everyone’s attention captive on our upward side of the escalator. We were all staring, involuntarily, and all thinking the same thing.

Of course, Lola Ludy said it out loud.

“Ooooh,” she purred, eyebrows arching to the ceiling, as the woman sailed closer to her. “Look at yoooouuu.” And then the woman was gone.

Lola Ludy is 83 years old now. She is in the advanced stages of Alzheimer’s. Her finery has been replaced by practical everyday clothing, which she is dressed in by her live-in nanny. She is hunched over and silent, no longer the most colorful peacock on the dance floor.

She barely remembers her own son’s name, much less mine. But she smiles when my daughter goes up to her, and gently murmurs, “Ang ganda naman ng batang ’to.”

For a few moments, she is lucid, as my 2-year-old plants kisses on her cheeks, and greets the woman she calls “Lolly.”

The author is a sports anchor, TV host and writer.