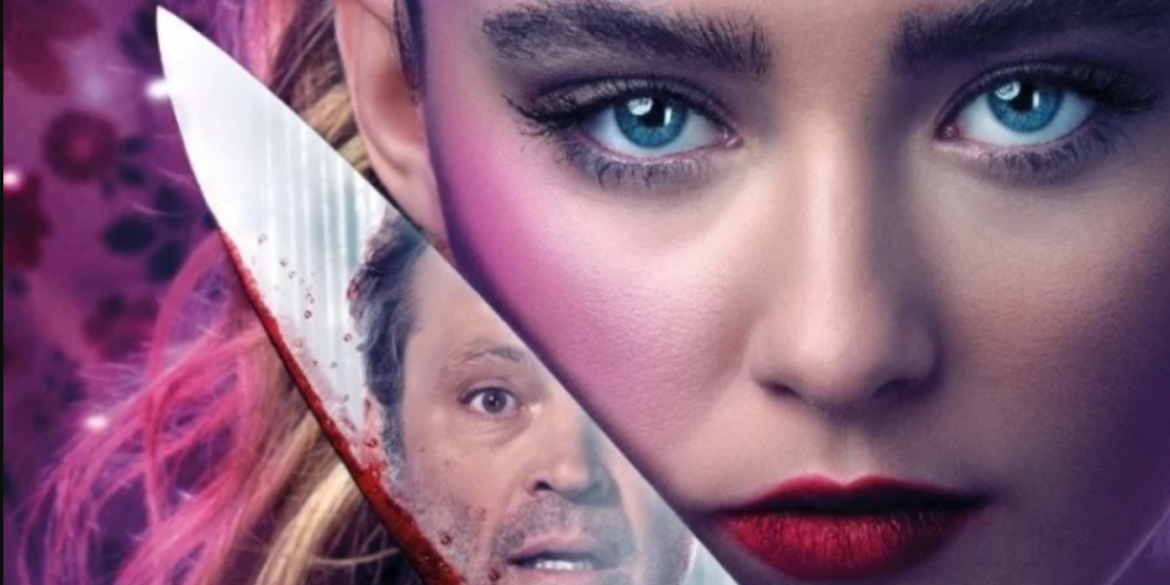 That’s essentially the pitch for a mashup that’s half slasher movie and half body-swap comedy, delivered with the self-aware wink of Wes Craven’s “Scream,” as a serial killer known as “the Blissfield Butcher” (Vince Vaughn) unwittingly trades places with his latest victim, dorky high school misfit Millie (Kathryn Newton).

Picture this: On Thursday the 12th, Millie is humiliated by the shop teacher (Alan Ruck). On Friday, she settles the score … only it’s not Millie but the Butcher who’s driving her body — and leaving corpses all over school — unless she can reverse the curse before midnight.

Co-written and directed by ’80s horror aficionado Christopher Landon, “Freaky” has fun with its premise, and audiences will too — though it’s a shame that the release date fell two weeks after Halloween.

In a decidedly R-rated prolog that sets the tone for just how grisly the subsequent murders will be, four high school students die in cringe-worthy ways that are so creatively absurd they’re unlikely to give anyone nightmares. Some may even laugh at the sight of, say, a kid’s head impaled from either side by a broken tennis racket, but the real punchline is the reveal of “Swingers” star Vaughn as the Blissfield Butcher.

At 6’5,” the hulking actor certainly has the build to play a small-town serial killer and the moment he lowers his mask is nothing if not a nod to Gus Van Sant’s shot-for-shot “Psycho” remake (of all things). Turns out, Vaughn’s better at playing a teenage girl than he is at harnessing his inner Norman Bates.

Just before the opening scene ends, the Butcher steals an ancient Mayan sacrifice dagger, intending to use it to continue his killing spree the following night. What he doesn’t know is that it’s imbued with a corny, centuries-old curse — one that Millie’s friends easily explain via a simple Google search.

The Butcher’s next victim, Millie, is meant to be a wallflower, which is kind of a stretch for Newton, who played the awkward friend in “Lady Bird” but comes across like one of the popular girls in this configuration (she nervously fingers her hair, Kristen Stewart style, but the shy routine feels like a put-on). Newton’s casting makes more sense once the switch happens: When Millie wakes up Friday morning, she grabs the butcher knife in the kitchen and the red “Rebel Without a Cause” jacket from her sister’s closet and heads to school, ready to reinvent herself.

Good thing the Butcher is just a maniac and not also a pervert or this movie might have taken a turn into very different territory. In any case, the Butcher sees his transformation as an upgrade, giving him easier access to his preferred target — vapid teens — whereas it’s the previously insecure Millie who wants her body back.

Landon, who also helmed the gory “Groundhog Day” redux “Happy Death Day,” excels at both the sly comedic and high-style horror halves of the movie’s personality, though combining the two can be bumpy. “Freaky” is technically a farce — that exaggerated genre so beloved by the French, so often exhausting to Americans, in which characters bumble their way through contrived comic situations — which may explain why Landon finds it somewhat unwieldy at times.

Take the scene in which Vaughn, who spends most of the movie “inhabited” by a teenage girl, tries to convince Millie’s two best friends, who are gay (Misha Osherovich) and Black (Celeste O’Connor) and acutely aware of their odds as supporting characters in a slasher movie, that it’s really Millie inside some random dude’s body. Vaughn busts out their secret handshake, which is a hoot, but the kind of joke that no one really wants to see repeated every time she needs to communicate her predicament to someone new.

“Freaky” knows that audiences have seen enough movies to accept its crazy setup, but it also realizes that the more characters discuss it on-screen, the lamer it seems — which explains why the characters start to behave in ridiculous ways as the film unspools, just to keep the plot from getting predictable. Except for the cryogenic insta-freezer inexplicably stored in the girls’ locker room, this school has the retro, reductive feel of a cable series from the ’90s (think “Buffy the Vampire Slayer”), when Landon and co-writer Michael Kennedy were teens.

Making this movie a couple decades later, the duo can get away with overturning the rigid gender politics of pre-Y2K adolescence, going as far as to include a queer make-out scene between Millie (trapped in the Butcher’s body) and her high school crush (Uriah Shelton). But it’s the female empowerment aspect that feels most contemporary, as Millie “feels kinda invincible” as a man, while the Butcher finds himself easily slapped around and tied up as a teenage girl. Our heroine also learns a valuable lesson during her time in the Butcher’s body: “Having balls sucks.”

The film’s tone is a bit too broad and borderline-cartoonish for “Freaky” to pull off its few sincerely emotional scenes, as when Millie uses her disguise to tell her widowed mom (Katie Finneran) what’s been on her mind. Not that anyone’s asking for such a movie to go deep. “Freaky” is more entertaining when it’s skating on the brink of camp.

Landon leans heavily on Bear McCreary’s high-suspense score, calling even more attention to the music via ironic soundtrack cues — as when a “Que Sera Sera” cover dissolves into $UicideBoy$ and Travis Barker’s punk anthem “Don’t Trust Anyone!” for the thoroughly modern Millie’s grand re-entrance — but it’s DP Laurie Rose who gives the movie its signature feel. As a meta entry in that most disposable of genres, the teen slasher movie, “Freaky” manages to feel original, which is saying something, since it’s basically warping conventions we’ve all seen a million times before.