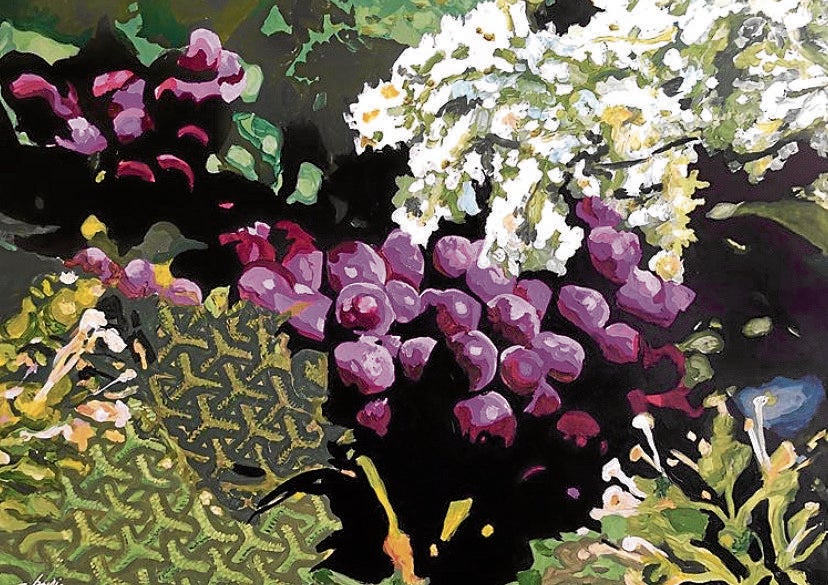 ‘Are those what you really need, especially at a time like this?’

Like many people of her generation, Anna Bautista is always on the lookout for what’s next in fashion, the latest iPhone and the like. But the pandemic has made this Gen Z-er rethink her ways.

“I don’t like how it has become normal for young people like me to think that way,” she tells Lifestyle in a phone interview. “There’s so much attachment to material things, and it’s not just people my age. Are those status symbols what you really need, especially at a time like this?”

In her recent show, called “Goods Garden,” held at Modeka, a Makati gallery, Bautista presented flowers and produce with logos and motifs of luxury brands.

“Gucci Apples” is a reference to the Italian luxury house’s GG Apple print collection. “Mango Miyake” has the graphic pattern of Issey Miyake’s Bao Bao bag, while the leaves in “Givenchy Gumamela” are printed with the French house’s logo.

Part of the proceeds from her show went to aid farmers in northern Siargao.

That she’s had three successful solo shows at her age—she turned 23 this past week—is even more remarkable when one knows Bautista started painting only a few years ago and is mostly self-taught.

“I admire Fernando Amorsolo, Banksy, Bencab … But don’t ask me about the technical side, since I’m not really familiar,” she says. Her choice mediums are acrylic and watercolor.

In the détournement style, she pays homage to Amorsolo by integrating modern objects into her renditions of his portraits of rural women. One woman in a baro’t saya is toting a green Jacquemus micro bag. Another, titled “Luisa V.,” is lugging a Louis Vuitton duffel bag. Still another has an Hermès Kelly on her lap.

More recent works include a gloved woman in Filipiniana, cigarette in one hand and a face mask hanging from the side of her face. (To view her other works, check out @annabautiportfolio on Instagram.)

Painting started only as a hobby for Bautista, who was part of her high school swim team, competing nationally, at Colegio San Agustin in Makati. “I enjoyed swimming, but there was too much pressure. I wanted something else to do, so I also tried other sports,” she says.

Then in her Home Economics class, she was asked to design T-shirts and costumes for the cheerleaders in her class. She started drawing.

“I was not really into arts as a kid, but they say I always had an eye for nice things,” says this young woman, who once fancied a career in fashion. “There’s no artist in my family. They’re all in the corporate world.”

A teacher brought her to art fairs for students in the malls, but that was the end of it. At DLSU, she enrolled in Business Management then switched to Philosophy, before finally deciding on Communication Arts.

It was in an art conception class under acclaimed film director Jose Javier Reyes that she rediscovered her love of painting.

“We were asked to create something about an issue that we’re passionate about and explore it creatively,” she says. “At first, I just tried illustrating. Then it kind of evolved from there.”

In that school project, Bautista wanted to tackle consumerism, after taking classes on capitalism and Marxism. She thought of painting brand icons “so I could bring light to that, because nobody really wanted me rambling on about consumerism. I wanted to capture it with my art,” she says.

“In society, we are often defined by what we have. I don’t think that’s sustainable or substantial. We buy objects as status symbols. I wanted to detach myself from that kind of mind-set. I want us to reevaluate our priorities … But I tell people not to take it too harshly. I just want them to think.”

Buyers of her art come from a wide range of people. “Funny because I also thought they would be people who patronize the brands that I paint,” she says.

She’s now working on pieces for her next show, possibly in 2021, while also attending virtual classes and doing her remote internship. “At first I was very displeased with virtual classes because the internet is very bad. But now, I don’t mind. I’m happy to have other activities. It no longer feels like Groundhog Day.

“People romanticize painting. They say it’s therapeutic, but for me it used to be so stressful, because I don’t often know the outcome. But someone told me that I’m lucky because I’ll always have my art to keep me company. It takes my mind away from what’s happening.”

She has also resumed her habit of bullet journaling. “When the pandemic hit, I was afraid I wouldn’t be able to use my planner. But it actually got more hectic.”

Her dad, who was skeptical of her painting hobby, she says, is now very proud of what she has accomplished. She’s considering doing art full time, but she’s also astute.

“Others think painting is glamorous. It’s not. It’s a lot of work,” she says. “I want to have a safety net, so I’m investing. I have businesses. I also do design consultancy work for some brands. It’s good to have creative outlets.”

In preparing for her next show, the idealism of youth takes over. “I just want my art to be more meaningful, to be part of the conversation, and to reflect the times.”