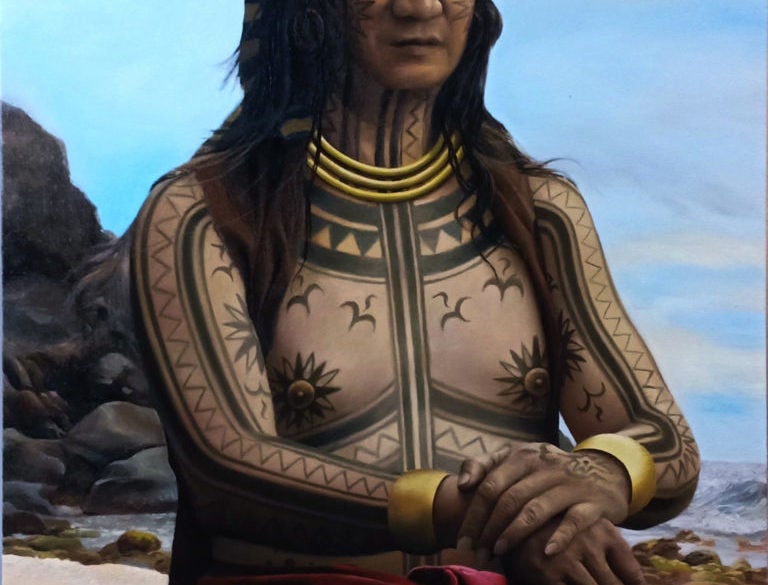 A portrait of Datu Lapulapu released by the National Historical Commission of the Philippines (NHCP) on May 7, 2020. The painting was done by Bulacan-based painter Carlo Caacbay. Photo from NHCP

Tattoos: The art that exhibits Philippine culture and history

MANILA, Philippines — Instead of teaching about the historical importance of marking one’s skin with indelible patterns or designs, a self-learning module – supposedly approved by the Department of Education (DepEd) – recently raised a disturbance on social media when it unconscionably associated tattoos with criminals.

In the module, the question, “Ang tattoo ay simbolo ng…” (A tattoo symbolizes…), was posed and users are given a multiple set of possible answers to choose from. Notably, however, no less than Broadway star Lea Salonga called out the module’s “key answer” to the question: “A. pagiging kriminal (being a criminal).”

She wasn’t having any of it and slammed the module via Facebook, even asking: “What kind of BS is this?”

Tattoos were a historic part of the tribal culture in the Philippines. Although in recent times, it was improperly linked with criminals.

In a 2018 interview by ABS-CBN News, social anthropologist and Director of Museo Kordilyera Analyn Salvador-Amores said tattoos were criminalized and “associated with deviant behavior” in the 90s.

According to a column by Filipino historian Ambeth Ocampo, the earliest record of Philippine tattoo art can be seen in the Boxer Codex – a Spanish manuscript written in 1590.

The tattoo is also known for its general term called “Batok.” But due to its widespread practice, it was also translated into various Cordilleran languages.

More than a body decoration

During pre-colonial and early Spanish colonial periods, tattoos were interpreted as more than just a body decoration. Depending on the region, tattoos were seen as a sign of bravery, a symbol of social standing, and a rite of passage.

Visayan warriors who were covered with tattoos were called Pintados. Each tattoo etched on the fighters’ bodies, according to Ocampo, symbolizes social class and bravery.

In the highlands of Northern Luzon, pagbabatuk or the process of tattooing was primarily done on hunters and warriors. For the ethnic groups in Bontoc, Ifugao, and Kalinga, tattoos were like medals. It represents the number of enemies they have killed.

For the Kalinga men, their body markings correspond to the respect and privileges they get. It was also known to safeguard warriors during fierce fights.

In contrast to how tattoos were described in the self-learning module, the art of tattoo embodies an important chunk of the Philippine culture and history.

“Batok is an inscription of culture on the body that can focus on religion, politics, warfare, and rituals. They are also seen as a repository of stored memories, experiences, and information. Tattoos record the biography of a person as well as the complex tradition of the community. It is a signifier of collective ethnic identity,” said Amores.