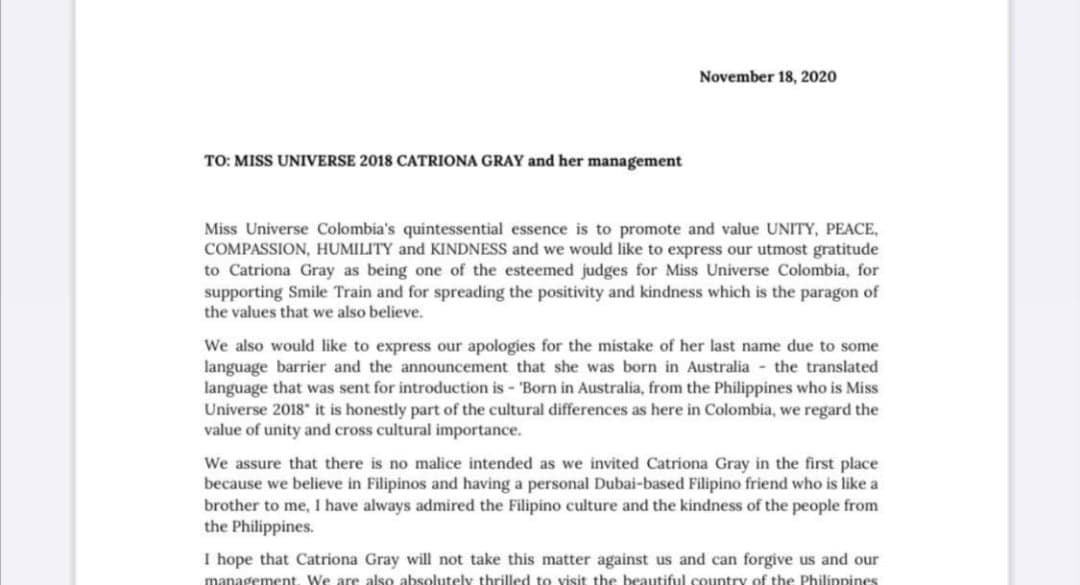 MANILA, Philippines — The Miss Universe Colombia organization has apologized to Catriona Gray over the controversy surrounding how the beauty queen was introduced during the pageant.

“We would also like to express our apologies for the mistake of her last name due to some language barrier and the announcement that she was born in Australia,” a statement issued by Miss Universe Colombia Organization president and national director Natalie Ackermann posted in an Instagram Story on Wednesday read.

During the coronation night of the pageant— where Gray served as a guest—held Tuesday, the last name of the beauty queen was misspelled as “Garay.”

The pageant’s host, speaking in Spanish, also introduced Gray as an “Australian by birth but represented the Philippines.”

After the program, Gray  posted an Instagram Story entry showing a photo of her captioned only by the word “Filipina.”

Ackermann said that originally,  the translated language that was sent for Gray’s introduction was “Born in Australia, form the Philippines who is Miss Universe 2018.”

“[It] is honestly part of the cultural differences as here in Colombia, we regard the value of unity and cross cultural importance,” Ackermann said.

“We assure that there is no malice intended as we invited Catriona Gray in the first place because we believe in Filipinos and having a personal Dubai-based Filipino friend who is like a brother to me. I have always admired the Filipino culture and kindness of the people from the Philippines,” the organization president and national director added.

Ackermann also had this to say of Gray: “I hope that Catriona Gray will not this matter against us and can forgive us and our management. We are also absolutely thrilled to visit  the beautiful country of the Philippines soon.”

Born in Cairns, Queensland, Gray soon moved to the Philippines in 2011 to pursue a modeling career. It was in 2018 when Gray bagged the Miss Universe crown — the fourth Filipina to do so. [ac]