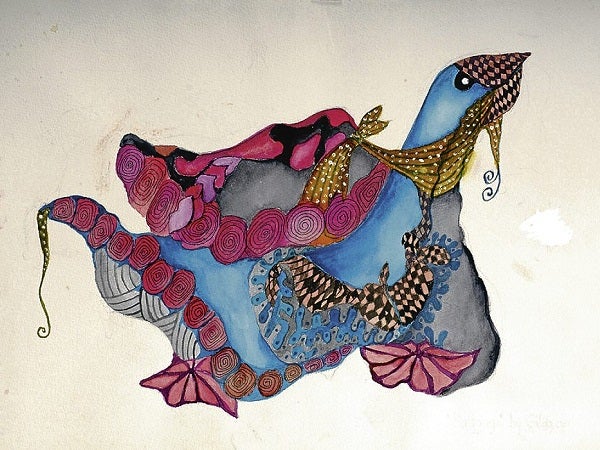 Our flora and fauna

“Bahay Kubo” is a folk song popularized during the period of the American Thomasites (early 1900s), and I don’t think there’s Pinoy who can’t sing it. But did you ever notice that in its roll call of the popular Philippine vegetables, the ampalaya is not included? Neither in the original nor in the nosebleed version that my daughter-in-law BingBing e-mailed me! No wonder jokesters say it got so bitter and wrinkled!

My nipa hut is very small,

The plants around are a variety of all.

Plus there are also radish, mustard, onion, tomato, garlic and ginger, all around them are sesame seeds

And sesame seed around the rim.

The song suddenly reminded me of the vegetable plot my gourmet son, who cooks, has started alongside the carport. There are malunggay plants and leeks, luyang dilaw (turmeric), wansoy (coriander) and curry leaf. Also, blue ginger or galangal used in curry, which one maid said was langkawas and fortwith mixed with bagoong to eat with hot rice. It was heavenly.

Newly planted as well is a young kaffir lime tree whose leaves are used in Thai curry. Before Thai food became popular in Manila, kaffir lime leaves were only available if one of us came from Bangkok. Then Mol got wind of an apartment in Malate, vacated by a Thai national, in whose yard had been planted a kaffir tree. That’s where Mol got his first local supply.

Of course now there are a lot of kaffir lime trees around. Another maid had an aha! moment, too, and identified the aromatic lime as something wild growing in their province and used for perfuming the bath.

I am, as usual, sitting under the bower in a spot of sun. The fantail birds are back, raping the orange flowers of their honey. Two tiny white butterflies flit back and forth over the ferns. It is a beautiful day.

The garden is now so much more beautiful since Mol’s wife Lilli-Ann took it over. She has planted a lot of flowers in between the greens and now it is dotted with pink, orange and yellow dendrobiums, tall red torch ginger, and violet flowered creepers. Even my small dry fountain has been planted to anthuriums.

I enjoy having no horticultural aptitude. When a rare flower blooms, all I can do is clap. And when the ipil tree rains fine yellow blooms on my head, I think it is a curtain call and I take a bow.

In a big vat in the garden live two turtles. They are the same turtles received by Mol’s kids as children’s party giveaways. They have been with us about four or five years. The turtles have grown from dipping-saucer size to dinner-plate size. They are regularly supplied fish food, always imprisoned, always safe in that vat. The water never overflows even when all around it is flooding the whole earth. I sometimes wonder if the turtles do not get cold or lonely in their eternal prison, when the sky is gloomy and there’s trouble in the land.

There have been more cruel gifts in children’s parties than turtles, like baby rabbits and yellow ducklings that have no chance of surviving in kids’ hands. There must be a special place in purgatory for hostesses who give such party favors.

Once, long ago, a monkey appeared in our property. It walked back and forth on the roof of our low carport. It wasn’t at all like the simian in Jose Rizal’s “Monkey and the Turtle” folk tale. This one wasn’t mean, it was hungry.

Whenever we saw it, we would run to the fridge and scrounge for bananas or avocados, and if none, even bread or leftover pudding or pork chops to give to the monkey on the roof. The boys noticed that it had a broken strap still tied to its waist. It must have been somebody’s pet that had escaped.

The monkey appeared each morning, swinging from tree to tree and from yard to yard. It had become the neighborhood pet, and I like to think everyone fed it. Then one day the monkey didn’t show up anymore. I suspect someone in the neighborhood, possibly even its owner, had caught it and chained it back to its bamboo pole. Someone who couldn’t stand seeing such freedom in man or beast.