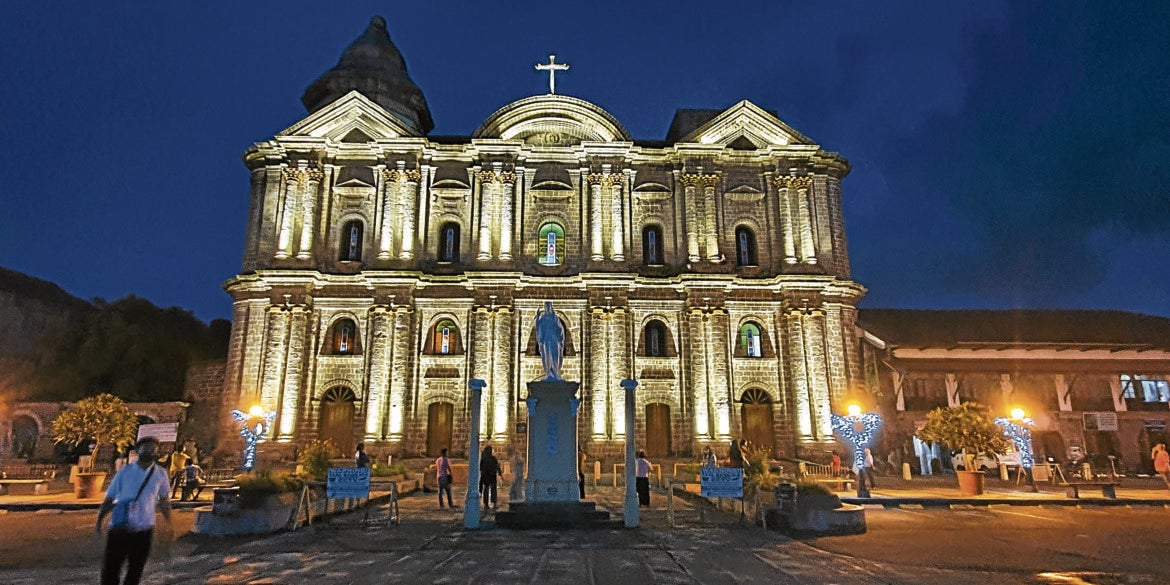 Lights graze up the pillars and arches of the Taal Basilica façade to highlight its importance to the community.

Before sunset, Taaleños eagerly gathered around the patio of the Minor Basilica of San Martin de Torres. By dusk, darkness shrouded the basilica’s silhouette to reveal the warm lights that enhanced the pillars and the roofline. When the Madonna and Child lanterns, the string lights around the topiary bushes, lamp posts with wreaths and the basilica’s giant star were illuminated, the locals clapped and cheered.

This was the first time in the 142-year history of the Taal Basilica, as it is commonly known, that the patio was decked tastefully with Christmas decorations. It’s the second time since 2015 that architectural lighting design has been used to highlight the basilica’s importance to the community.

Architectural lighting designer Georgina “Mia” Protacio was tasked by the Taal parish to customize lighting systems that would create an elegant building at night, enhance an environment conducive to worship and highlight symbolic details.

Parish priest Fr. Manuel Guanzon explained that the lighting design and the Christmas décor were offshoots of the basilica’s recent restoration by the National Historical Commission of the Philippines.

“There is joy in the Basilica’s renewal and we wanted to convey this through the lighting,” he said.

For Protacio, the Taal Basilica is a prestige project as it is Asia’s largest Catholic Church which can accommodate 1,500 parishioners. Standing on a hilltop, the bell towers, the dome and gables are visible from different directions. When lit at night, they become like beacons of glory for Taal.

Trained in Sweden and London, Protacio draws from the rich tradition of heritage churches in Europe. She learned that the lighting design must exercise prudence in giving the right amount of emphasis and support without becoming bold or glaring.

“The church is a sacred ground so the design should be discreet yet dramatic and uplifting,” said Protacio.

LED lights are used not only for their economy but because they also highlight textures such as the adobe bricks of the façade. The play of light and shadow at night focuses on the façade’s important details. The uplighting, light projected upward, emphasizes the majesty of the pillars, while the shadows suggest the humble character of the Basilica.

Protacio explained that nocturnal lighting must be symbolic. “At 5:30 p.m., you see light at base of the pillars. As it darkens, you see more light. Highlighting the pillars emphasizes their height. Shadows are important because they add depth of space. The idea is to show the dignity and splendor of the basilica.”

She pointed out that the cavernous interiors of the basilica produced uneven lighting even at daytime. The design plan enhances the natural light and augments the dark corners. The lighting of the ceilings and walls are indirectly lit by hidden lighting sources. “The experience of the space must be soothing not glaring,” she said.

During daytime, the lighting draws attention to the altar. It also helps the churchgoers to focus on the liturgy while the priest can also see the audience’s faces without the glare.

“The artificial lighting should look as natural as daylight. It likewise showcases the exquisite trompe l’oeils,” said Protacio.

At night, the light and shadow emphasize the rhythm of pilasters, the shallow rectangular columns projecting from the wall, to accentuate the basilica’s grandeur. The sanctuary of Our Lady of Casaysay, Taal’s guardian, glows in the darkness as if to represent hope.

More than ever, the Taal Basilica’s role has become more important to the community.

“We were only closed for a few days when we cleaned up the ashfall from the Taal Volcano eruption,” said Father Guanzon. Fortunately, the basilica was spared from the volcanic flare-up last January.

During the lockdown, Taal Basilica continued its daily Masses with physical distancing despite reprimands from the local goverment.

“We can’t stop the devotion of the people. The church is a place of refuge for them especially in these difficult times. They should not be barred from entering House of God,” said Father Guanzon.

Upon the ease of restrictions, Taal Basilica has been holding regular services following the government-sanctioned 30-percent capacity. That’s an average of 500 people or three for each pew on a Sunday or a wedding.

The lighting has likewise provided security around the grounds. In the past, couples were caught canoodling on the benches and dark corners. Today, the basilica’s brightened patio has become like a plaza. Taaleños enjoy leisurely strolls, take selfies or walk their dogs. A family once had a picnic in the car, replete with pots of rice and viands and paper plates.

The lighting design has fulfilled the basilica’s requirements while enhancing the Baroque architecture and the religious art, said Father Guanzon.

“Lighting inspires. It is a reference to God as Light. A well-lit church makes one feel His presence and the people become alive,” he said. —CONTRIBUTED INQ