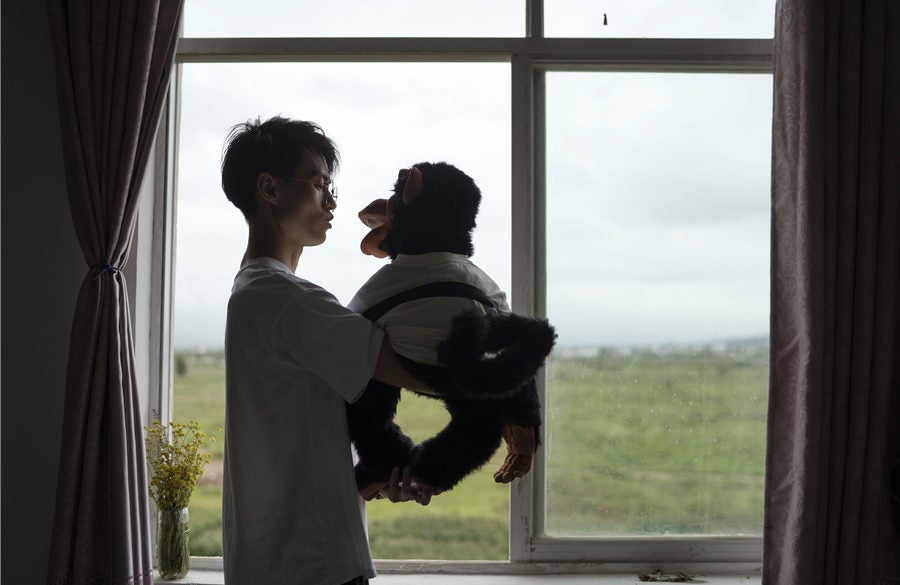 Conversing with "Monkey Jack" is Li Bing's daily routine. The performance of ventriloquism is usually based on the amusing interaction between the ventriloquist and the puppet. [Photo by Wang Qing/For China Daily]

It is a not high-profile profession in China, and there are only a handful of people proficient in ventriloquism in the country. It is said to have originated in ancient Egypt, with a history of more than 3,000 years. There are also many records about ventriloquism in ancient China, often referred to as “belly fairy”.

It was also called “belly-talking”, but in fact the sounds do not come from inside the belly, rather fluttered through the vocal cords.

Ventriloquism, or ventriloquy, is an act of stagecraft in which a person creates the illusion that their voice is coming from elsewhere, usually a puppet prop, known as a “dummy”. Ventriloquists do not move their mouth, and they exert their strength in the abdomen to adjust the breath at different positions of the vocal cords. Sounds are put forth through the breath to create resonance in the nasal and cranial cavity.

Li Bing, a ventriloquist in his 20s, was born in a rural village in Peixian county, Xuzhou, East China’s Jiangsu province. In order to ease the burden on his father, Li, who had excellent school grades, gave up the opportunity to go to university and stepped into society early in life to earn a living. Li had worked as a salesperson, construction worker, street vendor, and populace actor. He is incredibly hardworking and often very intelligent, versatile in all sorts of different jobs. Living on his own hands gives him a sense of fulfillment.

The first step in becoming a good ventriloquist is to choose a puppet that matches the character you are trying to create. The artist needs to work on throwing his voice, using a different accent or tone, and speaking without moving his lips. Animating the puppet is another aspect of ventriloquism, so that the artist usually takes effort to practice moving the puppet’s mouth and body in time with what he is saying. In time, the artist has to develop a routine and dialogue between himself and the puppet.

There is no high threshold for learning ventriloquism, nor does it require any basics. Getting it started works well for some people, but many find it hard to maintain when on the go. It takes three to six months to get started with ventriloquism, and at least several years for proficiency.

On one occasion, Li saw a video on the internet in which a foreign ventriloquist performs with skill. The audiences burst into laughter when the artist acted out an episode with his peculiar vocal technique and cute puppet prop. Each gag was rewarded with a generous belly-laugh. What had stricken him from the outset was that something as pervasive as ventriloquism must be a deep part of the story of life itself. Suddenly, it seemed that this was the career he had been looking for in his entire life, and the dream that had been submerged in his mind suddenly resurfaced in reality.

Li works hard to learn on his own and immerses himself in professional training classes. Soon, with his amazing talent, he mastered the ventriloquism performance skills in a time that others could not. But the essence of mastering the art lies in having good jokes and charisma with the audience, just like a stand-up comic.

Since then, Li and his puppet “Monkey Jack” have been inseparable from each other. Li does not stay in one place for very long, and he is always on the move, sometimes in an amusement park, sometimes in a folk art club, or on the street. He says he is a fan of the street art culture, and he is acquiring a street artist certificate. He is planning to travel around the country while performing the art.