How K-dramas are getting us through this pandemic | Inquirer Lifestyle ❮ ❯ 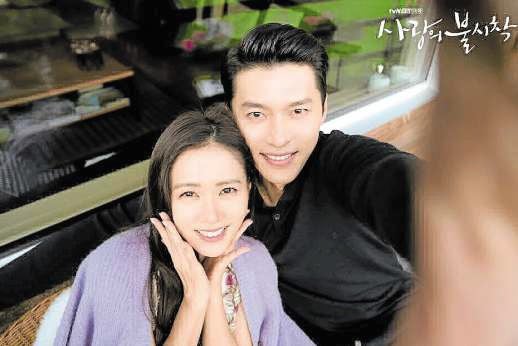 “Crash Landing On You” and its lead stars Son Ye-jin and Hyun Bin revived interest in older romantic K-drama series.

How K-dramas are getting us through this pandemic

Our viewing tastes may have changed, but our loyalties have not. Exchange of cultures should be encouraged and not mocked

K-dramas already had a so­lid fan base locally when “Crash Landing On You” (CLOY) started streaming on Netflix. But what CLOY has done is stoke curiosity in those who have never seen a K-drama.

The drama, which premiered on Dec. 14 last year, became popular over the holiday season. It reached fever pitch in January as viewers started sharing their thoughts on social media, making it trend with eve­ry new episode.

At the onset of the pande­mic, fans proudly announced on Facebook that they’d watched the show for the third or fourth time. CLOY clung to the top spot of Netflix’s Most Watched list weeks after the finale. (CLOY gave birth to the list.)

The drama had at least five active Facebook groups when it was streaming, not inclu­ding groups dedicated to lead stars Hyun Bin and Son Ye-jin. Fans openly discussed the drama in their accounts and in the groups, which made it even more popular. It was a stark contrast to those who watched dramas in 2017 or earlier. Conversations with strangers about a series were often limited to the comment section of illegal streaming sites. They were also automatically deleted after six months.

The word “CLOY” alone helped to make the show trend. Clueless significant others of fans started asking what CLOY was in their own social media accounts, boosting CLOY’s popularity even further.

“Winter Sonata” is credited for beginning the Hallyu wave in the Philippines. CLOY, on the other hand, should be recognized for opening the doors of K-dramas even wider. Its viewers started exploring other titles, searching for the same heart-fluttering feelings they experienced in CLOY. Thus ol­der romantic dramas benefited from its popularity.

When filming in other countries halted because of the pandemic, shoots for K-dramas did not. Thanks to the efficient handling of their government, movements were limited but filming was not completely halted. Everyone followed protocols because there were clear guidelines.

Thus, the supply of K-dramas didn’t stop. The pandemic made K-dramas soar even higher. This year, on top of “World of the Married” and “Flower of Evil,” we’ve seen “Record of Youth” “Start-Up” and “Tale of Nine-Tailed.”

Accessibility also helped in its promotion. Before Netflix invested in their library of K-dramas, we had VIU. The new streaming platform iQIYI got Ji Chang-wook’s “Backstreet Roo­kie” to promote their brand. The time saved from the prepandemic traffic was used to binge shows on these platforms.

Film director Laurice Guillen, in a forum hosted by Korean Cultural Center last month, said that she has seen 50 K-dramas since the pandemic started.

The “Tanging Yaman” director was impressed with the storytelling of different series. What struck her about K-dramas, she said, is how they don’t stay within a certain genre. One series can begin as a horror comedy and end up as a romantic drama. She also praised how K-dramas include Korean culture into the story.

This is the expertise of K-dramas. It subtly weaves South Korean life and culture into the story. A lead character spending time in a jjimjilbang (public bathhouse) eating tea eggs and drinking sikhye (sweet rice juice) encourages travelers to give it a try. Historical dramas also pique the interest of travelers, so they flock to places like the Joseon Dynasty Gyeong­bokgung Palace.

Travel restrictions have limited Filipinos’ trips to Korea. But there’s still a slice of K-drama that we get to enjoy here.

K-dramas have also captured Pinoys’ hearts through our stomachs. We have become adept in cooking thinly sliced pork belly on tabletop grills before wrapping it with lettuce leaves. Restaurants that offered unlimited meat were closed during the lockdown, but it presented other business opportunities to some.

Deliveries for samgyupsal became a hit. Raw pork and beef bellies, marinated ribs and the side dishes and sauces became available with just a phone call. Hot plates and other tools needed could also be ren­ted for a fee.

As if we needed more urging to eat it, Filipinos learned that kimchi is a superfood and can boost the immune system. Thus, for a brief period, there was a shortage of kimchi. But Filipinos learned how to make and sell it. Korean noodles have also found a place in mainstream grocery stores.

Finally, there’s also a question of whether we have given up our nationalism for K-dramas. Nothing can be further from the truth. We’ve just grown tired of the same plot­lines of local dramas. We’ve seen all versions of wives slapping mistresses and vice versa, babies getting swapped at birth, and bullying of adopted children.

But we still know the plot of “Ang Probinsyano.” Local Hallyu fans still embrace refreshing films such as “Through Night and Day.” We still also get a good laugh at the naughtiness of shows such as “Hayop Ka!” We are proud of Ben&Ben and listen to their music.

When Gilas Pilipinas faces South Korea in basketball, you can count on us to cheer for our flag. Heck, we can even help our team because we can now understand their language. No one dares cuss our boys on the court while we’re around. See, our viewing tastes may have changed, but our loyalties have not.

I also find a hint of racism whenever I read criticisms toward fans of Hallyu drama. No one calls out a rabid NBA fan who has never been to America as unpatriotic. I’ve never heard anyone branded jeje for liking “The Avengers” and “Justice League.” No one got bullied for loving Mexico’s Thalia and her dramas.

We’ve always had a good relationship with Korea. They’ve never invaded our lands. But they’re guilty of invading our airwaves because we now listen to K-pop. We supported South Korea during the Korean War and they are still grateful to us because of it.

Exchange of cultures should be encouraged and not mocked. Instead of looking at the Hallyu wave as an intrusion, we should instead learn how it became a global phenomenon. We have the talent and the looks. We just need producers who believe that the local market is ripe and ready for new ways of telling the Filipino story. INQ