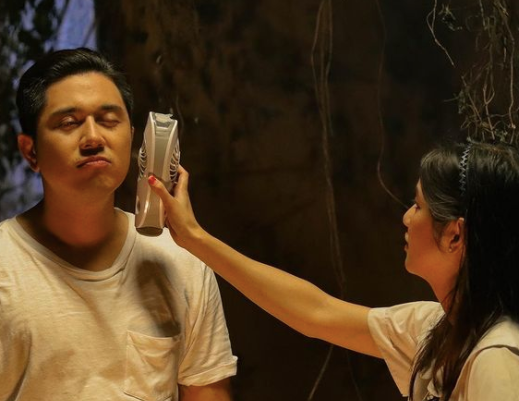 Young actress Charlie Dizon, just like her Jane character in “Fan Girl,” one of the official entries in this year’s Metro Manila Film Festival, was also at some point engaged in serious fangirling.

Dizon shared that she once fangirled over the K-pop group F(x) while training in Korea.

(It all started when I liked F(x). That’s when I really got interested in K-pop.)

Back then, she was mimicking one of its members, Amber Liu, the rapper in the group.

(I felt I was fit to be a rapper. That’s when my interest on it started, until I auditioned in Korea.)

While there, Dizon was able to see her idols personally in the variety show “Inkigayo.”

(A manager of a girl group there learned that I was a huge fan of F(x). She also knows that I am a trainee there. She brought me (to the show) so I would be inspired in my training.)

Meanwhile, playing the title role in “Fan Girl” turned out to be her most challenging role ever.

(For me, it’s a huge pressure because it’s my first lead [role]. The process we went through while we were shooting wasn’t easy.)

She had to apply method acting which was what director Antoinette Jadaone instructed to be followed during the shoot.

(That was one of the challenges that I faced while shooting. But over-all, we’re happy with what we did, so more than [feeling] the pressure, I am more excited now.)

In the movie, Dizon as Jane, a die-hard fan of Avelino who plays himself, engages in a kissing scene with him. In real life, kissing her idol never occurred to Dizon.

(I could not imagine that, that I would be able to kiss my idol because I feel that it’s unattainable. I can’t imagine, but I imagined being his [screen] partner someday. I was thinking it would only be possible through acting. But I never imagined that I will be able to kiss him in real life.) JB