Nature, self-determination and the pandemic on the mind of Baguio artists | Inquirer Lifestyle ❮ ❯ 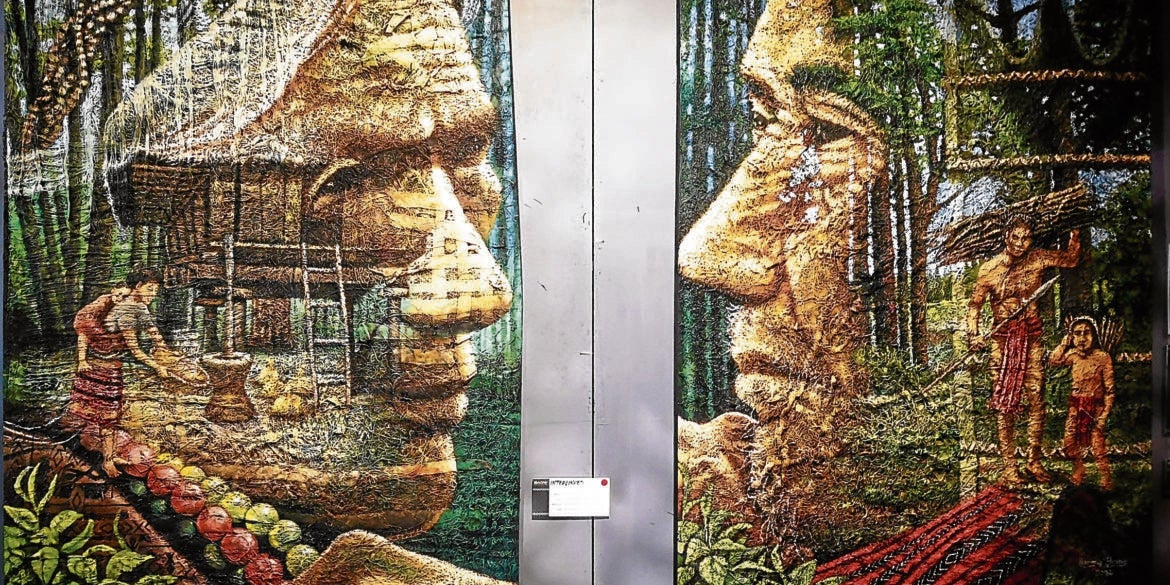 Nature, self-determination and the pandemic on the mind of Baguio artists

Baguio has prevalent issues that also reflect national concerns over environmental degradation, heavy vehicular traffic on the main thoroughfares and the felling not just of trees but of freedom-loving patriots, among others. The Unesco-declared Creative City of Folk Arts and Crafts is home to a teeming community of artists and artisans, they who can articulate these concerns in what they are doing.

In the exhibition “Interlinked,” ongoing at the mezzanine of the newly refurbished Baguio Convention Center until Dec. 15 (open 9 a.m. to 4 p.m., except on Mondays), the community, made up of novice, midcareer and veteran artists, comes together to give what to curator Erlyn Ruth Alcantara is “the city’s distinctive cultural expression.”

This time around 34 individuals expressed their views through traditional media, mixed media, assemblages, installations, sculptures, et al., on the sacredness of life, even of property. Their means of expression may be diverse, but the artists are united on a deeper level. Perhaps the fragility of life becomes more pronounced as the COVID-19 pandemic goes on.

Gallery A draws together responses to the pandemic and interpretations of Cordillera folklore. Oliver Olivete’s massive “Preystation 3X” stuns near the entrance with its bright colors of a child’s playthings (Legos and other miniature figurines) assembled together behind glass with Mickey Mouse, or at least his recognizable ears, serving as the dominant outline. At a time when children are going online for their education using smartphones, laptops and tablets, the work contains a foreboding of what the future holds for a computer screen-besotted generation.

John Frank Sabado’s “COVID-19 No Trespassing” is like a loom with familiar Cordillera patterns in the weave and the coronavirus at the center of it all. The gallery guide let us know that there was another way of looking at the work—from the side, not just front, of the panel. If one moves one’s phone or one’s eyes very slowly, the work seems like a deck of cards being shuffled.

Silvino Dulnuan’s acrylic painting “Silent Night” presents an untamed forest teeming with wildlife that dwarfs the sole man on the canvas. The eagle, deer, snake, even the dragonfly, are all larger than him, signifying that these fauna deserve as much space on this earth as human beings.

Roberto Acosta’s terra-cotta sculptures have been scaled down since he began his explorations with this medium during his University of the Philippines Baguio teaching years. Nonetheless, the artist makes a powerful plea for people to heed the cry of Nature in his two pieces, “Agyaman” and “Nu Dinggem.” His male and female figures play musical instruments to show the sweetness, the necessity of things evergreen.

Refreshing are the watercolor and ink on paper works of Danielle Florendo, a children’s book illustrator. In one piece she shows a Benguet market scene. The faces of the crowd are rendered sideways to imply how each person is so involved in the day’s business and busyness.

Writer-visual artist Rocky Cajigan does hyperrealist renditions of products in the Baguio market from fish and meat to broccoli, cucumbers, eggplants, okra and charcoal. They all come wrapped in ever-present, transparent plastic bags that the city is trying to discourage in usage.

The same Gallery A houses works of Bumbo Villanueva who doesn’t hide the influence of his late father, the sculptor-educator Ben-Hur. The bronze “Ang Duwende ng Sarimanok” features the mythical bird of the Maranaos with an elf astride its back. The feeling it gives off is lightweight, especially the way the bird’s flying feathers were carved. It was a rest from the heaviness of the messages conveyed by previous artworks.

Gallery B is devoted to politics and Cordillera culture. Leonard Aguinaldo’s provocative floor-to-ceiling woodcut on paper “45” indicts the perpetrators behind the cutting of 45 pine trees to give way to a giant mall’s expansion.

There is an altar-like, backlit installation, “Banwar ti Umili,” translated to “The People’s Heroes,” put up by the collective Sulong Likha. It features Pedro Dungoc, Lumbaya Gayudan and Macli-ing Dulag, who were on the forefront of the anti-Chico Dam movement. They are considered martyrs in the Cordillera people’s defense of ancestral lands and in the struggle for self-determination.

Fara Manuel Nolasco’s installation “We’re Not Here: Mother and Child” can be read on many levels. On the literal and symbolic planes, there is a makeshift shelter in camouflage material (in increasingly militarized surroundings?). The clothes of the mother are in blue and white (the suffering madonna’s colors?) hanging alongside her underwear and those of her vulnerable child.

Katti Sta. Ana’s assemblage “Car-free City” contains the longing for a biker-and pedestrian-friendly city with everything that this dream implies: less carbon dioxide emissions, healthier lifestyles, decongested streets that can thus be opened for small- to medium-size entrepreneurial undertakings.

Hermie Bruno put together the unraveled threads of several canvases and painted over them to create the partner pieces “Layad Ya Gaget en Ama.” They were the first two works sold during the opening of the exhibition and extol the love of parents and their hard work.

COVID or no COVID and whatever their differences, Baguio artists continue to create. —CONTRIBUTED