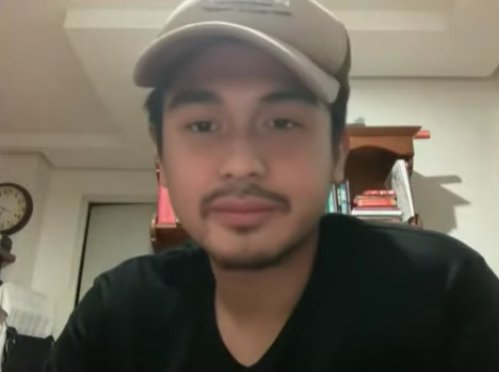 Why Paulo Angeles is sort of thankful for the pandemic

Actor Paulo Angeles is, to some degree, grateful for the pandemic. Not that he’s happy that it wreaked havoc in the country, but it has afforded him more time to spend with his siblings.

Angeles spoke about spending time with his brothers during the online press conference for the iWantTFC original production “Bawal Lumabas: The Series” on Dec. 8. He plays Onyx in the series, a brother to the OFW character of Emerald, played by Kim Chiu.

He pointed out that it takes about eight years for someone to study to be a doctor, and in the case of one of this brothers, that brother had to stay in a condo while studying.

(My other brother is also going to take up Medicine, so he also now lives in a condo.)

(I have work. But sometimes, when they come home here, we get to be together. So, with this ECQ, it’s our first time after so many years to be complete. We’re all together.)

Still, Angeles acknowledges that the pandemic had caused tremendous problems, particularly since there is uncertainty among people.

(Of course, there is still a little anxiety because you don’t know if there would be a vaccine, really. There’s corruption in the government so sometimes you will really lose hope, but just pray. At least I got to bond with my family.)

Angeles, aside from being an actor, is the assistant manager of a bank, and the type who keeps his problems to himself, thinking he could rise above them. So what’s his takeaway from the character he plays?

(Of course, if you have a sibling or a relative who is an OFW, you have to consider their sacrifices for you. From my role, I learned that you should not be ashamed to ask for help from others, more so when you can no longer bear your problems.) JB