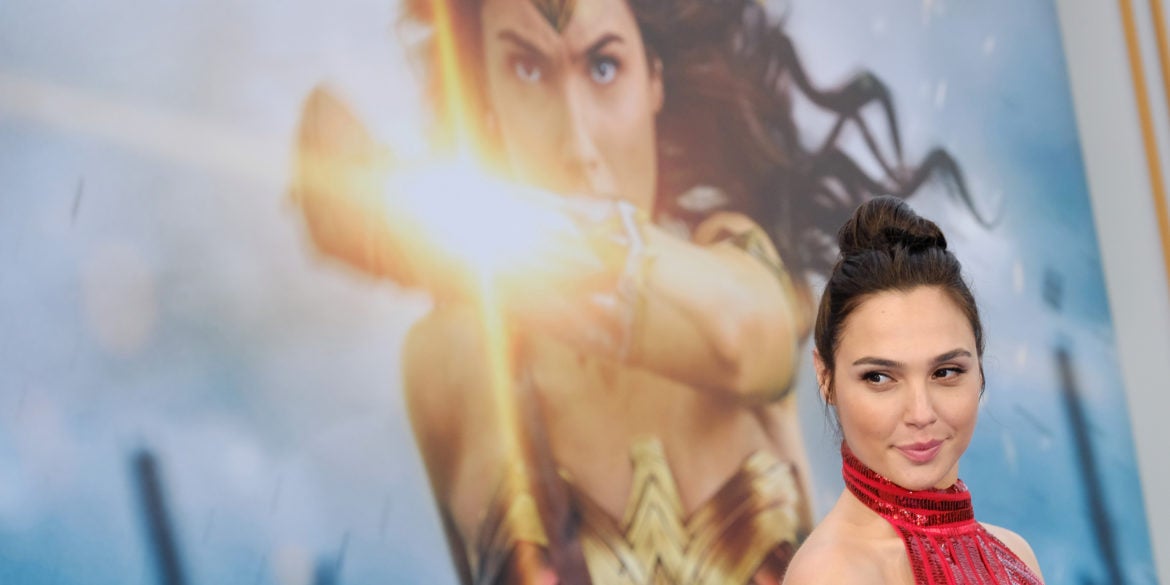 (FILES) In this file photo taken on May 25, 2017 actress Gal Gadot poses at the world premiere of "Wonder Woman" at the Pantages in Hollywood, California. - With the release of "Wonder Woman 1984" on Christmas Day, the world's biggest female superhero could alter the future of blockbuster movies. After multiple delays, and with two-thirds of North American theaters closed due to the pandemic, "Wonder Woman 1984" will become the first marquee studio film to hit big screens since "Tenet" in September. In a groundbreaking twist, the sequel will premiere simultaneously in homes on the HBO Max streaming service -- part of a broader new strategy that has infuriated A-list stars and filmmakers across Hollywood. (Photo by Chris DELMAS / AFP)

Each time she wields her lasso, the stakes are high. But with the release of “Wonder Woman 1984” on Christmas Day, the world’s biggest female superhero could alter the future of blockbuster movies.

After multiple delays, and with two-thirds of North American theaters closed due to the pandemic, “Wonder Woman 1984” will become the first marquee studio film to hit big screens since “Tenet” in September.

In a groundbreaking twist, the sequel will premiere simultaneously in homes on the HBO Max streaming service — part of a broader new strategy that has infuriated A-list stars and filmmakers across Hollywood.

“It’s a crazy new world… all hell is breaking loose,” said director Patty Jenkins, who reunites with star Gal Gadot for the follow-up to their critically acclaimed 2017 hit.

“Everybody doesn’t know what to do, and everybody’s trying to figure it out,” she told an online talk hosted by Hollywood trade publication Variety.

Any hopes of topping the original’s stunning $800 million box office haul have surely been dashed by Covid.

But shareholders, rival studios and movie lovers will be eagerly watching to see how the superhero fares, both on the few big screens still open, and in driving new subscribers to HBO Max, which is currently dwarfed by Netflix and Disney+.

Intensifying the pressure, parent company AT&T has doubled down since announcing the strategy for “Wonder Woman 1984” by confirming it will follow the same approach for all 2021 Warner Bros movies, including “The Matrix 4” and “Dune.”

The move drew howls of outrage from big-screen aficionado directors, and stars who are used to taking home a portion of box office profits.

The sequel itself leaps forward in time from the World War I trenches of the original to the rampant American capitalism of the 1980s.

Wonder Woman has spent the interim decades living a solitary life, before events force her to swing from lightning bolts once again to avert an apocalypse.

While the first film built up the Amazonian princess’ origin story, the sequel sees Gadot’s character exploring her struggle to “help mankind to be better,” Jenkins told journalists at a virtual press conference.

Like the previous comic book movie, “1984” also packs in plenty of humor, and adds Cirque du Soleil-inspired fight choreography that relies on old-fashioned wire rigs and stunt performers rather than computer tricks.

“It’s the hardest movie I ever got to shoot, by far,” said Gadot.

Since her last outing, Wonder Woman’s blockbuster success for DC Comics has been mirrored by Captain Marvel, played by Brie Larson in the rival Marvel films.

Gadot, 35, who says she “didn’t have the opportunity to see all of these strong female characters” growing up, views this trend with pride.

“We’re females, our bodies are different, the way we move is different,” she said. “And this is how we do it.”

Whether “Wonder Woman 1984” matches the success of the first film will be tough to judge, at least initially, with streaming statistics notoriously opaque.

Box office opening figures below $40 million in overseas territories where the film debuted last week, including China, were disappointing, though meaningful comparison with pre-pandemic statistics is difficult.

While admitting her movie was “made for the large screen,” Jenkins said the film has already been postponed “enough times,” and it felt “strangely good” to get it out for audiences by any means.

“It’s wild, wild times. I feel like there’s not one thing that will just stay put in this pandemic,” she said.

“Every single structure that you tried to rely on is just in crisis and falling apart.”