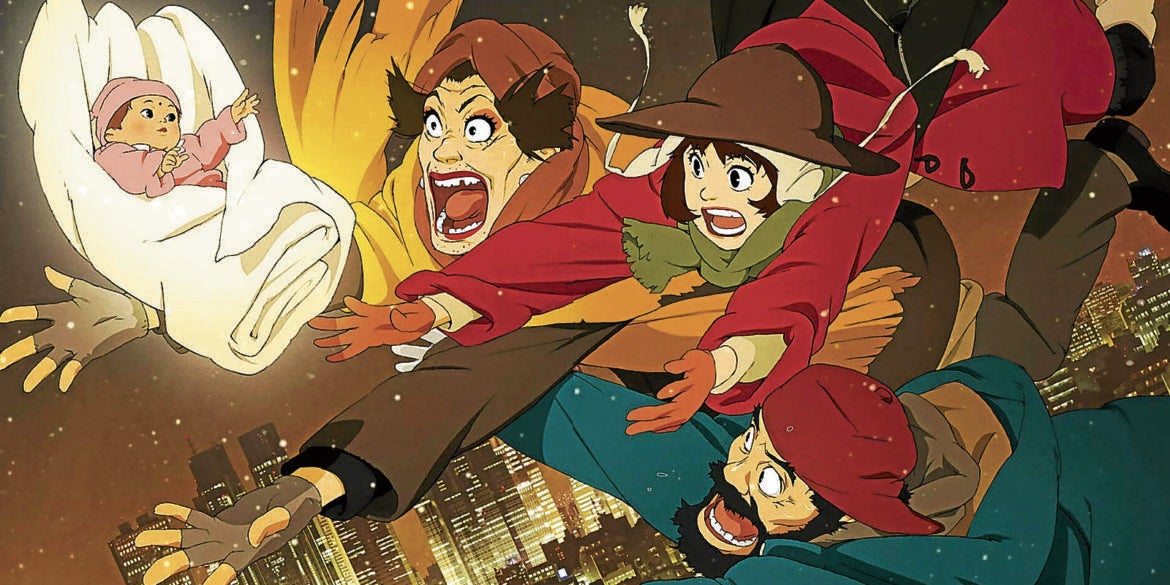 AniMovies to watch on your Christmas break

The world of Japanese anime can be a little jarring to those trying to work their way around all the options. Now that it’s the Christmas break, it’s the perfect time to binge the many genres of AniMovies. Whether you’ve been into anime for years or just need something new to keep you sane, here are four AniMovies for you this Christmas season.

Miyuki, Gin and Hana are a makeshift family living on Tokyo’s cold winter streets. On Christmas Eve, the three rummage through piles of garbage in an attempt to find presents. Instead, they find an abandoned baby in the trash heap!

Hana decides that the trio is going to seek out the child’s parents, as well as an explanation for their actions. They follow the leads in the baby’s basket and set on a colorful and comical adventure throughout Tokyo from there, hoping to receive a little Christmas miracle of their own.

Satoshi Kon’s characters are so well written and witty that they seamlessly move the chaotic plot along. They’ll have you laughing throughout the film, and may even teach you a lesson or two on what family really means.

‘Maquia: When the Promised Flower Blooms’

Maquia is an Iorphian, a special race that live for hundreds and hundreds of years. To keep their identity and race safe, the Iorphians live on a secret island, far away from the humans. Although Maquia has always been with people like herself, she lives with feelings of loneliness and longs for a taste of the outside world but doesn’t dare disobey the clan chief’s orders. One day, the Iorphians are attacked by humans, and Maquia accidentally gets carried far away from her homeland. She is now truly alone with no way to go back. As she begins to calm down, she comes across a baby caged in the arms of his dead mother. Despite knowing nothing of this foreign world she now lives in, she takes this infant and raises him as her own, determined to make it work for them both.

Maquia is a beautiful and heartwarming tale that depicts the realities and hardships of growing up, family, and motherhood with the slightest element of fantasy.

‘The Wolf Children Ame and Yuki’

The story follows single mother Hana and her two children, Ame and Yuki, born in the rainfall and snowfall seasons respectively. Though they may look like a normal family, they have one secret—both Ame and Yuki have the ability to change into wolves, a trait they inherited from their late father.

Hana struggles to tame her wild-natured children, all while keeping this peculiar secret from the rest of society on her own. She decides to relocate her family to the countryside, hoping to give them a normal life. Meanwhile, Ame and Yuki both struggle with their identity, not sure which half of them they should live with. Overall, Wolf Children accents the hardships of a single mother living in a cruel modern world.

Like “Maquia,” the theme is deeply rooted in family, specifically in the hardships of single motherhood.

‘My Neighbours the Yamadas’

The movie centers around the quirky Yamada family and their day-to-day lives. Takashi and Matsuko are a happily married couple living with their two kids, Noboru and Nonoko, and their grandmother, Shige. Together, the family makes everyday life fun and colorful, even with all their constant playful bickering.

Takahata Isao’s spirited, comic-strip style characters are sure to have you laughing at their little mishaps and enjoying their daily adventures. This movie is perfect for those of you who want to watch a movie with your little siblings, as it’s sure to get you giggling at all the crazy antics of the Yamada family.