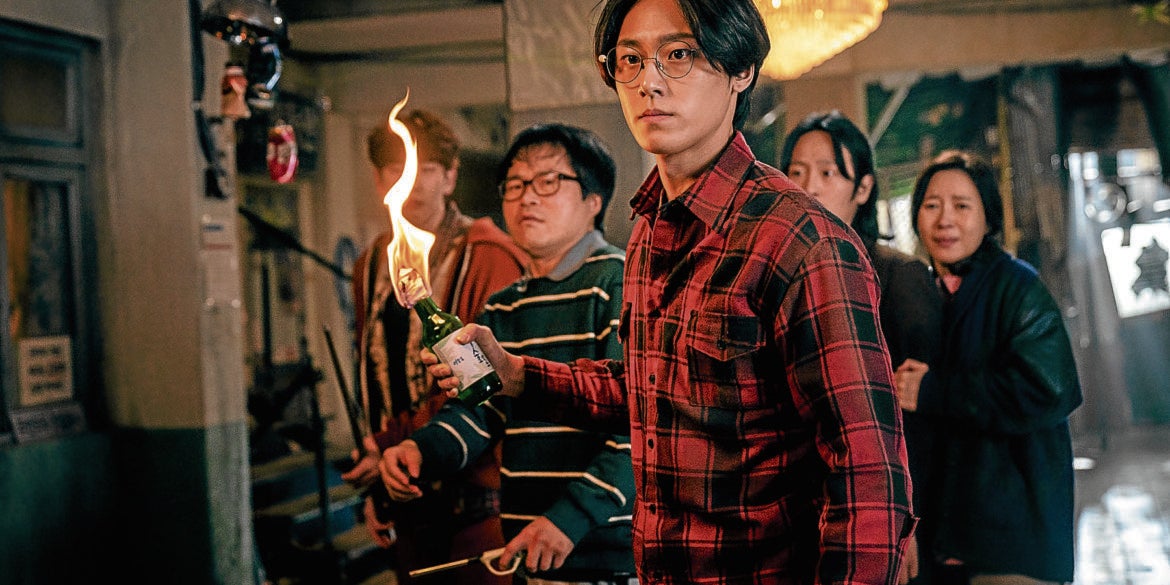 “What did you eat? Was it delicious?” Jin-wook asked. The stars were in separate places, practicing social distancing during the press conference and interviews held on on Dec. 16. “It was okay,” Do-hyun, who plays on Eun-hyuk, answered. The “18 Again” actor said it with a deadpan expression. But Jin-wook was undeterred. He turned to Song Kang next.

“Song Kang, did you have ramyeon? Was it delicious?” Jin-wook asked the “Love Alarm” star.

“No, I had gimbap. Yes, it was delicious, Hyung,” Song Kang who plays Hyun-soo answered. Jin-wook said something else in Korean that this writer could no longer understand. But whatever it was, it made Do-hyun laugh.

The smiling Jin-wook is completely different from the character Sang-wook that he played in the series “Sweet Home.” He was very charming, funny and took the lead during the press conference and the interview. In comparison, Sang-wook is reserved, serious and violent. The actor known for his romantic comedy shows such as “The Beauty Inside” and “Miss Granny” talked about the process of playing the role.

“The character that I portray is quite antisocial and lacks very much in social skills. But I’m actually a very people person so I tried to stay distant from other people and stayed away from interpersonal relationships to kind of get into feeling what that life would be like,” he said. “I studied what it was like to be a recluse. He’s such a violent character. I focused on portraying this very cold-hearted character.”

“Sweet Home” is based on a webtoon with the same title. It’s about a group of people trapped inside an apartment while dangerous monsters and humans prowl outside.

Lee Eung-bok (“Goblin” and “Mr. Sunshine”) is the director of the series. In a separate interview with Super K, he talked about how each episode highlighted a specific character.

“I think the actors did a very good job in progressing the narrative,” he said. “The original webtoon already has a variety of colorful characters. We wanted to bring that to life and as we tried to capture that into a 10-episode series, we tried to have the focus shift from one character to another—by having Hyun-soo appear first then passing the baton to Yi-kyeong.”

This format of highlighting a character allowed the actors to shine and become memorable. The choice of storytelling is effective as “Sweet Home” remains the most-watched show on Netflix since it premiered on Dec. 18. It shared the spotlight with shows such as “Alice in Borderland” and “Start-Up.”

The director said that the most enjoyable part of creating “Sweet Home” was trying out new VFX and CG technology. “We failed quite a bit but even the failure of the experimenting process itself was very fun and enjoyable. These types of live action series are rare in Korea,” he said.

He added that there were even cases that the output of the creatures was not exactly the way they wanted it to come out. However, the charm of each actor made up for it, since humans turning into monster is not a novel idea, said director Lee.

“You can never guess what monster you’re going up against. Each person becomes a different monster since your hidden desires distort you into a monster. There’s a wide variety of monsters that you can meet,” he said.

Here are more excerpts from the interview:

What kind of monster will you transform into?

Song Kang (SK): I love going to the gym so I think I am going to turn into a weights monster. I love lifting weights.

Lee Do-hyun: I’m a big fan of dogs. I think I might turn into a dog.

Si-young, do you think you’ve been stereotyped to play specific characters?

Song Kang, how did you cope with the changes that happened to you in “Sweet Home”?

SK: I tried to focus on the overall outline of the character based on the webtoon series. And as far as some of the more additional parts, I thought that it was up to me to really polish those emotions. At home, I would constantly think about the character Hyun-soo, what kind of thoughts he would have, as well as the deep desires of the hallucinating Hyun-soo.

How did you prepare to play a monster?

SK: Hyun-soo is not a natural-born fighter. So two months before the shoot, I went to the action school. It was my first time doing wire action and it was really difficult. I would be completely exhausted after doing one scene. I would arrive and meet with the action director about one hour before we went into shooting a scene.

You’ve become more popular after “Love Alarm.” How did that help you career-wise, Song Kang?

SK: I don’t think I gained fans because of me as a person. I think most of the fans I have are fans of the character I played in “Love Alarm.” (The series) has provided me with rich experience and helped me a lot in my acting career.

Do-hyun, how did you shift from being the dad in “18 Again” to your character in “Sweet Home.”

DH: I shot “Sweet Home” before I went into shooting “18 Again.” Since it was based on an original webtoon, I referred a lot to the character in the webtoon series. I also had a lot of interesting conversations with the director to prepare.

If you faced a similar situation as Eun-hyuk, do you think you will do the same thing he did?

DH: I am known to many to be a very, very grounded and realistic person. And I also think my personality is quite reasonable and logical. So I think if I’m in a similar situation, I would make a similar choice of sacrificing something or someone for the greater good.